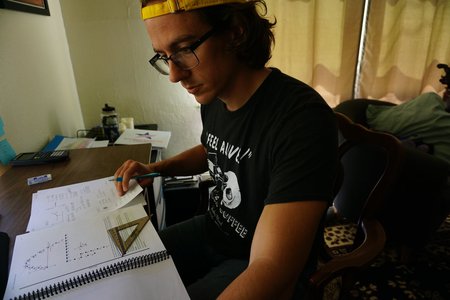 Soldiers are no strangers to boot camp, but those who participate in the Warrior-Scholar Project (WSP) trade drill sergeants and physical training for world-class researchers and an intensive introduction to education in science and technology. This summer, 17 active-duty service members and veterans completed a weeklong academic boot camp featuring scientists from Caltech and the Jet Propulsion Laboratory, which the Institute manages for NASA.

"Having the chance to go to Caltech made me experience the same sort of energized feeling so many others have used to catapult themselves into higher education," says William Doran, a U.S. Air Force veteran who completed the summer 2020 WSP session at Caltech.

The Warrior-Scholar Project began in 2012 as a way to support enlisted military members and veterans who sought to make the leap from the U.S. Armed Forces to top-tier colleges and universities. Typically, participants stay on campus for their one- or two-week academic sessions. This summer, Caltech's first year as a participant, the program had to adapt to the COVID-19 pandemic, and, just like Caltech's traditional students, the WSP students made the adjustment to remote learning. The Caltech/JPL program gave the military veterans access to instructors such as Lee Rosenthal, a graduate student in astrophysics; Renee Ludlam, a postdoctoral scholar in physics; and Jamie Rollins, a scientist with the Laser Interferometer Gravitational-wave Observatory (LIGO).

Rollins's physics talk laid out principles of two-dimensional motion and fundamental equations such as those that govern force and velocity, then added in acceleration and gravity to allow the students to calculate how far a ball thrown with a certain angle and force will travel before it lands. Rollins says the most important component was the introduction to principles of mathematics and algebra and the critical-thinking skills needed to solve problems in college-level physics courses. "The people who participate in the program come from backgrounds where they haven't had a lot of formal exposure to this material," Rollins says, "so I really tried to encourage people to ask questions, and I got some good ones throughout the lectures and also afterwards. It was a good group of people who are very motivated."

Ludlam helped to teach the group the basics of coding in the Python language. She then led a research project on idealized rocket motion that tasked students with applying material from their physics lectures to a simulated launch, an especially fitting topic since the Warrior-Scholar Project occurred during the week of the Mars Perseverance rover launch. "It was such an incredible experience to watch the students learn, problem solve, and grow during such a short period of time," she says. "I showed them videos of rocket launches on the first day, and, by the end of the week, they had set up their own rocket launch to send a rover to Mars."

For Leonidas Moustakas, astrophysicist and section manager at JPL, the importance of the Warrior-Scholar Project lies not only in the material but also in the introduction it offers to the rigor and culture of STEM, which he believes is invaluable for veterans who want to move from the military into higher education. He gave a cosmology presentation that walked WSP students through what he calls the "juicy parts of the science": the formation of the universe, the quest to understand dark matter and energy, and how math provides a framework to simplify physics and create models to understand the cosmos. Moustakas also personalized his lecture by sharing the path through multiple countries and universities that him to become a scientist at JPL.

Moustakas initially worried about his ability to connect over Zoom with students, especially those not accustomed to remote learning. Those fears proved to be unfounded as the WSP students peppered him with questions about cosmology and JPL. "It was clear there were three or four people that were just geeking out to the max and others who had never seen this before but were asking great questions from a pure curiosity point of view," Moustakas says.

Rollins and Moustakas both became involved in the first year of WSP at Caltech through recommendations from colleagues at other universities that had participated in the program, and both said they were gratified to be able to collaborate with members of the military community. Similarly, Air Force veteran Doran, who says he struggled in school previously, found the chance to connect with Caltech and JPL researchers was invaluable.

"The eagerness of WSP instructors to listen to us and explain how they navigated their transition has made my own difficult switch to college seem far less daunting," he says. "Similarly, the willingness of Caltech researchers to instruct us over Zoom reinforced to me that my education is important, so much so that they and JPL scientists are taking time out of their day to be available to teach us."