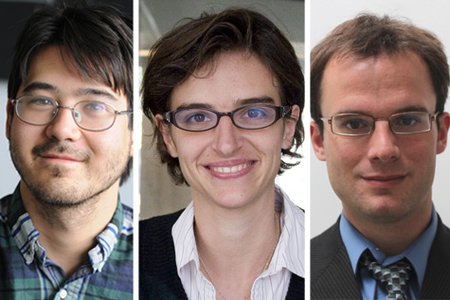 PASADENA, Calif.—Chiara Daraio, professor of aeronautics and applied physics, and Christopher Hirata, professor of astrophysics, both at the California Institute of Technology (Caltech), and Ian Clark of NASA's Jet Propulsion Laboratory (JPL)—which is managed by Caltech—are winners of the Presidential Early Career Award for Scientists and Engineers. This is the highest award given by the United States government to science and engineering professionals in the early stages of their independent research careers.

Daraio was recognized by the Department of Defense for her "pioneering contributions to nonlinear mechanical phenomena in acoustic crystals, granular material, and multifunctional nanostructures, and for mentoring women and providing research opportunities for high school and undergraduate students."

Daraio arrived at Caltech in 2006. She leads a research group that focuses on the design, realization, and testing of materials with novel mechanical properties. Materials developed by Daraio's research group can be used in impact-mitigation systems, in protecting mechanical systems from undesired vibrations, and in new biomedical devices for imaging and diagnostics.

"I am very excited about this award. I wanted to be an inventor and engineer early on. I came to the U.S. as a graduate student and am grateful that here I could pursue my dreams," says Daraio. "Caltech has provided me with an excellent environment to realize my ideas, working with the world's best students, postdocs, and colleagues on the faculty."

"The entire Caltech community is proud to see Professor Daraio recognized with this presidential honor, not only for her pioneering research accomplishments, but also for her commitment to students and diversity," says Ares J. Rosakis, chair of Caltech's Division of Engineering and Applied Science, Theodore von Kármán Professor of Aeronautics, and professor of mechanical engineering. "Even though she is near the beginning of her career she already embodies the key attributes of the Division of Engineering and Applied Science at Caltech."

Daraio added, "This has been a very special year for me: I had a baby just two months ago, and a few weeks earlier became a U.S. citizen. The Presidential Early Career Award is the icing on the cake."

Hirata was recognized by the Department of Energy for "innovative work reducing astrophysical uncertainties that limit the extraction of fundamental physics parameters from cosmological observations, for studies of the sensitivity of structure formation to the relative velocity between dark matter and baryons in the early universe, and for service on NASA/DOE Joint Dark Energy Mission working groups."

Hirata received his BS from Caltech in 2001, a time in which significant discoveries were being made in cosmology and high-energy physics. These discoveries guided him toward further studies into topics such as what happened in the first fraction of a second in the life of the universe, how galaxies are formed, and the fundamental nature and geometry of the universe. He earned his PhD at Princeton University and returned to Caltech as a faculty member in 2007.

"In the past decade, cosmology has been revolutionized by ever-improving observational capabilities. My colleagues and I have been developing the theoretical tools that enable us to connect the direct observables—the cosmic microwave background and the distribution of galaxies—to the underlying physical processes that occurred during the first fraction of a second after the big bang," says Hirata.

"I'm extremely pleased to see the national recognition of Chris Hirata's promise and achievement," says B. Thomas Soifer, chair of Caltech's Division of Physics, Mathematics and Astronomy, director of the Spitzer Science Center, and professor of physics. "His work is vital to our understanding of the formation and evolution of structures, such as galaxies, in the universe, and the award recognizes his leadership in this area."

"When I received word about winning this award, I was in the middle of debugging software code, so the work continues," Hirata says. "But it's nice to take a step back and see how far we have come. "

Clark was recognized by NASA for "exceptional leadership and achievement in the pursuit of advanced entry, descent and landing technologies and techniques for space-exploration missions."

"It's certainly quite an honor," says Clark. "However, there are remarkable achievements every day here at JPL/Caltech that are equally deserving of recognition. I wish we could honor the JPL and NASA teams for the amazing work on the Mars Science Laboratory as we prepare for it to land on Mars."

"Discoveries in science and technology not only strengthen our economy, they inspire us as a people." President Obama said. "The impressive accomplishments of today's awardees so early in their careers promise even greater advances in the years ahead. "

The Presidential Early Career Award for Scientists and Engineers was established by President Clinton in 1996 and is coordinated by the President's Office of Science and Technology Policy. Awardees are selected for their pursuit of innovative research at the frontiers of science and technology, and their commitment to community service as demonstrated through scientific leadership, public education, or community outreach. Fourteen Caltech professors and researchers have won the award since its inception.

Caltech is recognized for its highly select student body of approximately 1,000 undergraduates and 1,300 graduate students, and for its outstanding faculty. Since 1923, Caltech faculty and alumni have garnered 32 Nobel Prizes and seven Crafoord Prizes. In addition to its prestigious on-campus research programs, Caltech operates the Jet Propulsion Laboratory (JPL); the W. M. Keck Observatory on Mauna Kea, in Hawaii; the Palomar Observatory; and the Laser Interferometer Gravitational-Wave Observatory (LIGO). Caltech is a private university in Pasadena, California. For more information, visit http://www.caltech.edu.