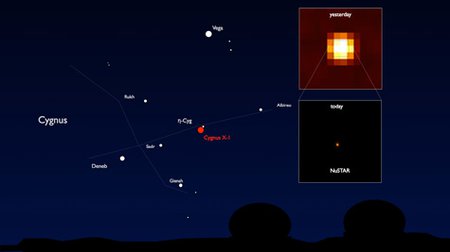 NASA's Nuclear Spectroscopic Telescope Array, or NuSTAR, has taken its first snapshots of the highest-energy X-rays in the cosmos (lower right), producing images that are much crisper than previous high-energy telescopes (example in upper right) Credit: NASA/JPL-Caltech
Tags:
astronomy & physics

NASA's NuSTAR space telescope has taken its first image, snapping a shot of the high-energy X rays from a black hole in the constellation Cygnus. NuSTAR—short for Nuclear Spectroscopic Telescope Array—was launched on June 13, and is the first telescope that can focus high-energy X rays. It will explore black holes, the dense remnants of dead stars, energetic cosmic explosions, and even our very own sun.

"Today, we obtained the first-ever focused images of the high-energy X-ray universe," says Fiona Harrison, a professor of physics and astronomy at Caltech and the mission's principal investigator, in a NASA press release. "It's like putting on a new pair of glasses and seeing aspects of the world around us clearly for the first time."