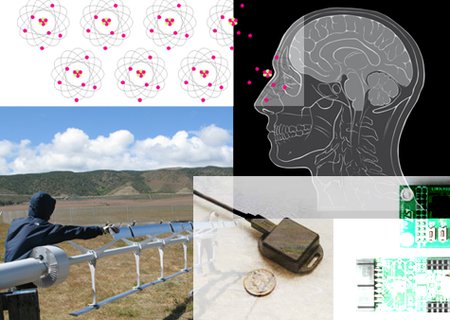 Caltech is embarking on four research programs that intend to produce clean energy, probe the bizarre phenomena of quantum physics, understand the genetic and neural wiring behind complex behaviors, and save lives during earthquakes. To support these projects, the Gordon and Betty Moore Foundation recently allocated a total of $17.5 million, part of the Foundation's $300 million commitment made to Caltech in 2001.

Center for Bio-inspired Wind Energy. Wind could be a big part of solving the energy crisis and curbing climate change. But the turbines need a lot of space, and land is limited—especially near population centers where energy demand is greatest. From studying how schools of fish swim, John Dabiri, professor of aeronautics and bioengineering, has found new ways to arrange the turbines in a wind farm that can significantly enhance the amount of power produced while minimizing land use. The $6 million center will also develop new turbine designs—inspired by the structure of trees—that could be the most efficient ever made.

In addition to wind-tunnel experiments and computational simulations, the funding will support field testing of wind-turbine designs at the recently established Caltech Field Laboratory for Optimized Wind Energy in northern Los Angeles county, one of the first research wind farms in the United States. "The combination of fundamental scientific research and real-world field testing will allow us to transition these new concepts from the laboratory to practical use more rapidly than typical academic research," says Dabiri.

Center for Exotic Quantum Systems. The $5 million center will study the strange quantum world both theoretically and with tabletop experiments. In particular, researchers will look at the collective behaviors that arise from groups of many particles—phenomena that are not predicted when analyzing the particles individually. Physicists will also examine the interactions between a photon and an atom, the understanding of which is critical for transferring quantum information. Led by Jim Eisenstein, the Frank J. Roshek Professor of Physics and Applied Physics, the center will also analyze the behavior of nanoscale structures, exploring the transition when objects become small enough for quantum effects to come into play. Another major focus will be to develop the technology that could lead to quantum computers, machines much faster than our silicon-based processors.

Genes, Circuits, and Behavior. What goes on in your brain when you watch a horror movie? Which neurons fire as you're navigating unfamiliar streets? A new research program will probe the causal links between genes, brain circuits, and behavior, trying to understand the neural networks and coding mechanisms responsible for emotional behaviors, such as those expressing fear and anxiety, and acquired behaviors like spatial learning and memory. The research could lead to new insights into many neurological problems, such as Alzheimer's disease and bipolar disorder.

The $5 million effort over five years will be led by David Anderson, the Seymour Benzer Professor of Biology, together with Pietro Perona, the Allen E. Puckett Professor of Electrical Engineering and Thanos Siapas, professor of computation and neural systems. "The project involves laboratories with very different expertise: molecular genetics in my lab, machine vision in Perona's, and systems neuroscience in Siapas's," Anderson says. "Together, these approaches should allow us to bring novel, interdisciplinary approaches to bear on some of the most fundamental and challenging problems in neuroscience."

The researchers will create automated and quantitative tools to measure complex behaviors in mice and rats that will be engineered so that the activities of specific neuronal circuits can be genetically manipulated. At the same time, they will use new techniques to monitor neuronal activity and record, in parallel, the massive amounts of data.

Community Seismic Network (CSN). This new kind of seismic network will consist of 1,500 small seismic sensors attached to desktop computers and cell phones. During an earthquake, the sensors will send data to an Internet-based system using what's known as cloud computing, which will produce near-real-time maps of the quake. Inexpensive and mobile, the sensors will form denser networks that will measure the shaking more accurately in places that don't have large seismic networks, such as India and Peru. Not only will the CSN allow seismologists to learn more about earthquakes, but it will be crucial for determining the safety of buildings—and saving lives.

Each project brings together a diverse range of fields. For example, the Center for Bio-inspired Wind Energy combines chemistry with fluid dynamics, the Center for Exotic Quantum Systems involves theoretical physics and nanotechnology, the Genes, Circuits, and Behavior project joins behavioral genetics with machine vision, and the CSN integrates seismology with computer science.

About the Gordon and Betty Moore Foundation
The Gordon and Betty Moore Foundation, established in 2000, seeks to advance environmental conservation and scientific research around the world and improve the quality of life in the San Francisco Bay Area. The foundation committed $300 million in potential grants over 15 years to the California Institute of Technology, to support the institution in maintaining its position at the forefront of higher science and technology research and education. For more information, please visit www.moore.org.