Caltech at the LHC 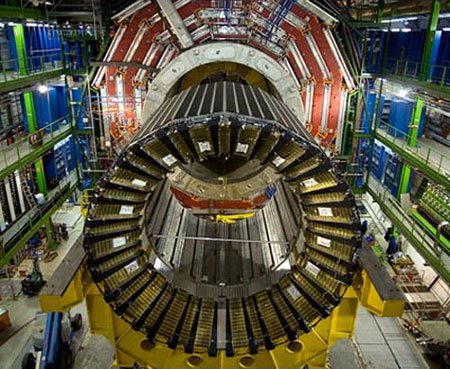 Maria Spiropulu and Harvey Newman, both professors of physics at Caltech, lead the Caltech team of 40 physicists, students, and engineers that is part of the Compact Muon Solenoid (CMS) collaboration at the Large Hadron Collider (LHC) in Geneva, Switzerland.

Spiropulu is an expert on devising ways to discover exotic phenomena beyond the Standard Model—the theory that describes how all particles interact—such as theories of supersymmetry that predict particles of dark matter. Newman did much of the design and development work on the crystal detectors that are now used in CMS. He also conceived and developed the worldwide grid of networks and data centers that stores and processes the flood of data coming from the LHC. With the LHC generating gigabytes of data per second, no single site can hold all the information, so the data is handled in a distributed fashion at hundreds of sites throughout the world, including Caltech's Center for Advanced Computing Research, the first university-based center for LHC data analysis.

Newman's team also runs the transatlantic network that links the LHC to the United States, allowing data to flow between Europe and North America. His team, together with Steven Low, professor of computer science and electrical engineering at Caltech, developed the state-of-the-art applications for transferring data over long distances, enabling terabytes of data to stream between sites at speeds of up to the 100 gigabits per second. Newman and Caltech engineer Philippe Galvez also developed a system called Enabling Virtual Organizations, an internet-based tool that helps physicists and scientists from other fields communicate and collaborate from anywhere in the world.

According to Newman and Spiropulu, the Caltech team consists of experts in everything from the detector and data analysis to how new phenomena might manifest at the LHC. Because the group is involved in so many aspects of CMS, Caltech is making a particularly significant contribution, Spiropulu says.

"Caltech is a premier institute of technology," Newman adds. "We continue to use our skills and vision to develop and deploy unique technologies with global impact even as we empower the scientists in our field."

Graduate students Yong Yang, Jan Veverka, and Vladlen Timciuc are all studying the photon-photon channel, searching for the Standard Model Higgs and excluding possible imposters. "We make sure CMS precisely measures the energies of photons, electrons, and positrons," says Adi Bornheim, a Caltech staff scientist who led the electromagnetic calorimeter (ECAL) detector group at CMS and currently participates in tests of the signal robustness at 125 gigaelectron volts (GeV, a unit of mass) in the photon-photon channel. Composed of 76,000 crystal detectors and weighing in at more than 90 tons, the calorimeter measures the energy of the electrons and photons produced by LHC collisions with high precision

Since 1994, Newman and Ren-Yuan Zhu, Caltech's manager of ECAL—along with a team of experts on crystal calorimetry and lasers—have been making sure the detector is calibrated to provide the exquisitely precise measurements required for discovery by the CMS detector. Marat Gataullin, an assistant scientist at Caltech and leader of the calibration team at CMS, says, "It would have been impossible to find the new particle in this channel without the 17-year investment in this special detector of the Caltech CMS group."

Caltech Tolman Fellow Artur Apresyan joined the search in the photon-photon channel recently, along with graduate student Cristian Pena, who recently arrived at CERN (the European Organization for Nuclear Research, the site of the LHC) to carry out the calibration of the ECAL for the remainder of the extended 2012 run. "This is intense," Pena says. "I want to get my hands into the work and contribute immediately."

Another Caltech Tolman Fellow, Emanuele Di Marco, helped lead the analysis of Higgs decays in the WW channel for the CMS team. He will present the results on behalf of CMS at the ICHEP 2012 conference, which will be held from July 4 through 11 in Melbourne, Australia. "As the impact of the discovery sinks in, I realize how much work remains to build the full picture," Di Marco says. "Squeezing the signal out of the WW channel is challenging."

In addition to the WW channel, Di Marco and newly arrived Caltech Millikan Fellow Si Xie have also worked on the ZZ channel. "We are doing our best to advance CMS's ability to measure this channel," Xie says. "There are already outstanding analysis techniques in CMS and we want to perfect them."

Newman, Spiropulu, Xie, Di Marco, and graduate students Chris Rogan and Yi Chen—in collaboration with colleagues from CERN, Fermilab, and Johns Hopkins University—will continue the preparatory studies for the ZZ channel; they published the first of those studies in the journal Physical Review D in 2010. They developed a kind of Higgs look-alike program that is being applied to the data to pick out the newly discovered particle.

"We will pin down the properties of this new particle," says Rogan, who was honored by Forbes Magazine as one of this year's top 30 leaders in science and technology under 30 years old. "We can learn more—we must use the knowledge from this discovery to inform and help direct our searches for supersymmetry or other exotic forms of new physics as well as experimental searches for dark matter. The implications for many other subfields are very significant." For instance, Javier Mauricio Duarte, a first year graduate student, will be using these findings in his work on supersymmetry and models of dark matter.

As the LHC continues to ramp up its energy, physicists hope that even more discoveries are on the way. "The LHC is pretty close to my dream experiment, and the LHC at twice the energy will be even better!" said graduate student Alexander Mott in an interview with Scientific American.

This summer, the group includes seven undergraduates (SURFs as well as Rose Hill and Musk Foundation summer fellows) and a couple of CERN summer students. Lisa Lee, a junior at Caltech who just arrived at CERN, sums up the experience so far with a sense of wonder. "What are the chances," she says, "that you take on a summer undergraduate research project in an experiment that makes the most significant discovery in recent history right at the moment you start?"