Art Inspired by Astronomy on Display at Caltech 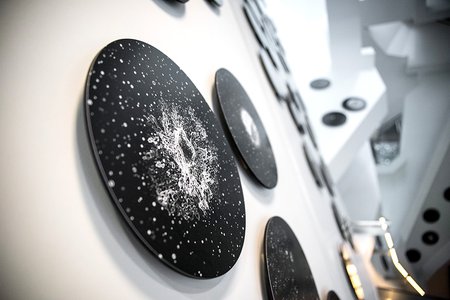 An important chapter in the history of astronomy is seen through the eyes of Los Angeles-based artist Lia Halloran at Caltech's Cahill Center for Astronomy and Astrophysics. Halloran was inspired by the 18th-century French comet hunter Charles Messier, who cataloged fixed, fuzzy objects in the sky that he and others had initially mistaken for moving comets. His catalog, which listed objects to avoid while searching for comets, would turn out to be very useful to astronomers. Many of the objects were later discovered to be the brightest known galaxies, star clusters, and gaseous nebulae. Astronomers still refer to the objects Messier cataloged by his name and catalog number; for example, Messier 31, also known as Andromeda, is the nearest galaxy twin to our own Milky Way.

In her art exhibition called Deep Sky Companion, commissioned with the help of Caltech's Kip Thorne, Richard P. Feynman Professor of Theoretical Physics, Emeritus, and E. Sterl Phinney, professor of theoretical astrophysics, Halloran created paintings of Messier's objects with blue ink on semi-transparent drafting film. These were then contact-printed onto photographic paper and cut into circles evocative of the view through a telescope. Prints of each of the 110 Messier objects are displayed on the geometrically skewed lobby walls and stairwells of the Cahill building, which was designed by architect Thom Mayne. Several of the original blue-ink paintings are displayed on the stairway landings.

"Lia Halloran's inspirational artwork and its creative layout encourages us all to rediscover these iconic astronomical objects for ourselves, in the new 'Cahill sky,'" says Phinney. "Ever since Fritz Zwicky began his own galaxy catalog in the 1930s using photographic plates from his 18-inch Schmidt telescope at Palomar, Caltech astronomers have been following in Messier's footsteps, creating their own accurate catalogs of newly discovered objects in the sky. And many of our deepest insights into the workings of the universe and its contents have come from detailed Caltech studies of the Messier objects themselves. The Deep Sky Companion artwork is both beautiful in its own right, and also reminds us of our heritage."

Funding for the exhibition comes from Dr. and Mrs. David Groce, the Caltech Department of Astronomy, and from Chapman University and the university's Office of the Chancellor's Scholarly and Creative Activity Grant. The exhibition ends on December 18.