Star-forming galaxy is the most distant ever found 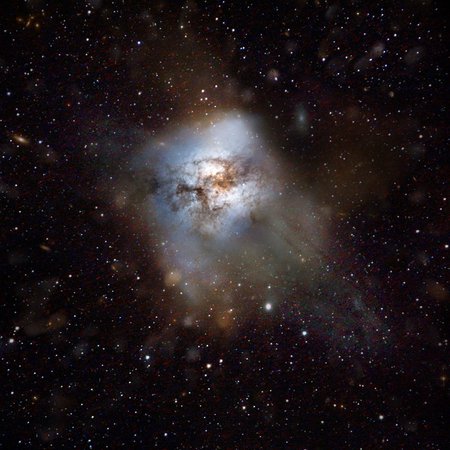 Artist’s impression of starburst galaxy HFLS3. The galaxy appears as little more than a faint, red smudge in images from ESA’s Herschel space observatory, but appearances can be deceiving for it is making stars more than 2000 times faster than our own Milky Way, one of the highest star formation rates ever seen in any galaxy. Amazingly, it is seen at a time when the universe was less than a billion years old, challenging galaxy evolution theories. Credit: ESA–C. Carreau 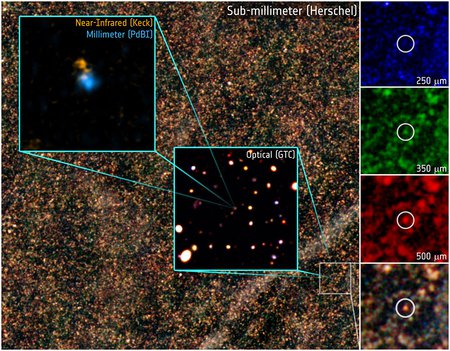 The galaxy HFLS3 appears as a small red dot in these Herschel submillimeter images (main image, and panels on right). Subsequent observations with ground-based telescopes, ranging from optical to millimeter wavelengths (insets), revealed two galaxies appearing very close together. The two are actually at very different distances, however, and HFLS3 (blue, in millimeter wavelengths) is so far away that we are seeing it as it was when the universe was just 880 million years old. Credit: ESA/Herschel/HerMES/IRAM/GTC/W.M. Keck Observatory
Tags:
astronomy & physics

Such is often the case for galaxies, at least: the first galaxies were small, then eventually merged together to form the behemoths we see in the present universe.

Those smaller galaxies produced stars at a modest rate; only later—when the universe was a couple of billion years old—did the vast majority of larger galaxies begin to form and accumulate enough gas and dust to become prolific star factories. Indeed, astronomers have observed that these star factories—called starburst galaxies—became prevalent a couple of billion years after the Big Bang.

But now a team of astronomers, which includes several from the California Institute of Technology (Caltech), has discovered a dust-filled, massive galaxy churning out stars when the cosmos was a mere 880 million years old—making it the earliest starburst galaxy ever observed.

The galaxy is about as massive as our Milky Way, but produces stars at a rate 2,000 times greater, which is a rate as high as any galaxy in the universe. Generating the mass equivalent of 2,900 suns per year, the galaxy is especially prodigious—prompting the team to call it a "maximum-starburst" galaxy.

"Massive, intense starburst galaxies are expected to only appear at later cosmic times," says Dominik Riechers, who led the research while a senior research fellow at Caltech. "Yet, we have discovered this colossal starburst just 880 million years after the Big Bang, when the universe was at little more than 6 percent of its current age." Now an assistant professor at Cornell, Riechers is the first author of the paper describing the findings in the April 18 issue of the journal Nature.

While the discovery of this single galaxy isn't enough to overturn current theories of galaxy formation, finding more galaxies like this one could challenge those theories, the astronomers say. At the very least, theories will have to be modified to explain how this galaxy, dubbed HFLS3, formed, Riechers says.

"This galaxy is just one spectacular example, but it's telling us that extremely vigorous star formation was possible early in the universe," says Jamie Bock, professor of physics at Caltech and a coauthor of the paper.

The astronomers found HFLS3 chock full of molecules such as carbon monoxide, ammonia, hydroxide, and even water. Because most of the elements in the universe—other than hydrogen and helium—are fused in the nuclear furnaces of stars, such a rich and diverse chemical composition is indicative of active star formation. And indeed, Bock says, the chemical composition of HFLS3 is similar to those of other known starburst galaxies that existed later in cosmic history.

Last month, a Caltech-led team of astronomers—a few of whom are also authors on this newer work—discovered dozens of similar galaxies that were producing stars as early as 1.5 billion years after the Big Bang. But none of them existed as early as HFLS3, which has been studied in much greater detail.

Those previous observations were made possible by gravitational lensing, in which large foreground galaxies act as cosmic magnifying glasses, bending the light of the starburst galaxies and making their detection easier. HFLS3, however, is only weakly lensed, if at all. The fact that it was detectable without the help of lensing means that it is intrinsically a bright galaxy in far-infrared light—nearly 30 trillion times as luminous as the sun and 2,000 times more luminous than the Milky Way.

Because the galaxy is enshrouded in dust, it's very faint in visible light. The galaxy's stars, however, heat up the dust, causing it to radiate in infrared wavelengths. The astronomers were able to find HFLS3 as they sifted through data taken by the European Space Agency's Herschel Space Observatory, which studies the infrared universe. The data was part of the Herschel Multi-tiered Extragalactic Survey (HerMES), an effort co-coordinated by Bock to observe a large patch of the sky (roughly 1,300 times the size of the moon) with Herschel.

Amid the thousands of galaxies detected in the survey, HFLS3 appeared as just a faint dot—but a particularly red one. That caught the attention of Darren Dowell, a visiting associate at Caltech who was analyzing the HerMES data. The object's redness meant that its light was being substantially stretched toward longer (and redder) wavelengths by the expansion of the universe. The more distant an object, the more its light is stretched, and so a very red source would be very far away. The only other possibility would be that—because cooler objects emit light at longer wavelengths—the object might be unusually cold; the astronomers' analysis, however, ruled out that possibility. Because it takes the light billions of years to travel across space, seeing such a distant object is equivalent to looking deep into the past. "We were hoping to find a massive starburst galaxy at vast distances, but we did not expect that one would even exist that early in the universe," Riechers says.

To study HFLS3 further, the astronomers zoomed in with several other telescopes. Using the Combined Array for Research in Millimeter-Wave Astronomy (CARMA)—a series of telescope dishes that Caltech helps operate in the Inyo Mountains of California—as well as the Z-Spec instrument on the Caltech Submillimeter Observatory on Mauna Kea in Hawaii, the team was able to study the chemical composition of the galaxy in detail—in particular, the presence of water and carbon monoxide—and measure its distance. The researchers also used the 10-meter telescope at the W. M. Keck Observatory on Mauna Kea to determine to what extent HFLS3 was gravitationally lensed.

This galaxy is the first such object in the HerMES survey to be analyzed in detail. This type of galaxy is rare, the astronomers say, but to determine just how rare, they will pursue more follow-up studies to see if they can find more of them lurking in the HerMES data. These results also hint at what may soon be discovered with larger infrared observatories, such as the new Atacama Large Millimeter/submillimeter Array (ALMA) in Chile and the planned Cerro Chajnantor Atacama Telescope (CCAT), of which Caltech is a partner institution.

The title of the Nature paper is "A Dust-Obscured Massive Maximum-Starburst Galaxy at a Redshift of 6.34." In addition to Riechers, Bock, and Dowell, the other Caltech authors of the paper are visiting associates in physics Matt Bradford, Asantha Cooray, and Hien Nguyen; postdoctoral scholars Carrie Bridge, Attila Kovacs, Joaquin Vieira, Marco Viero, and Michael Zemcov; staff research scientist Eric Murphy; and Jonas Zmuidzinas, the Merle Kingsley Professor of Physics and the Chief Technologist at NASA's Jet Propulsion Laboratory (JPL). There are a total of 64 authors. Bock, Dowell, and Nguyen helped build the Spectral and Photometric Imaging Receiver (SPIRE) instrument on Herschel.

Herschel is a European Space Agency cornerstone mission, with science instruments provided by consortia of European institutes and with important participation by NASA. NASA's Herschel Project Office is based at JPL in Pasadena, California. JPL contributed mission-enabling technology for two of Herschel's three science instruments. The NASA Herschel Science Center, part of the Infrared Processing and Analysis Center at Caltech in Pasadena, supports the U.S. astronomical community. Caltech manages JPL for NASA.

The W. M. Keck Observatory operates the largest, most scientifically productive telescopes on Earth. The two 10-meter optical/infrared telescopes on the summit of Mauna Kea on the island of Hawaii feature a suite of advanced instruments including imagers, multi-object spectrographs, high-resolution spectrographs, integral-field spectroscopy and a world-leading laser guide-star adaptive optics system. The observatory is operated by a private 501(c)(3) nonprofit organization and is a scientific partnership of the California Institute of Technology, the University of California, and NASA.