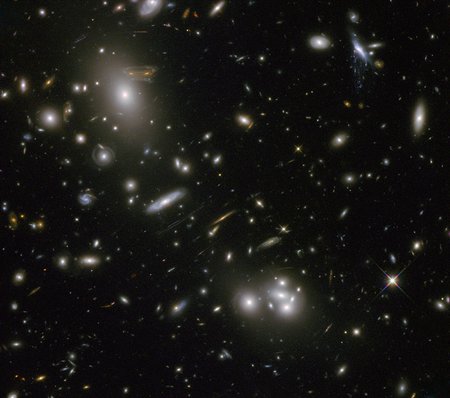 Caltech's astronomy department is kicking off a new stargazing and lecture series with the first installment taking place this Friday, February 19, at 7 p.m. in Hameetman Auditorium on campus. The monthly events will be free and open to the public and are designed to appeal to scientists and nonscientists alike. Following a 30-minute lecture on an astronomical topic, attendees will have an opportunity to observe the night sky through a telescope with the help of Caltech students and researchers.

The organizer of the new public education series is Cameron Hummels, a National Science Foundation Postdoctoral Fellow in astrophysics. In his research, Hummels develops computer simulations that model the evolution of galaxies. His hydrodynamical gravitational simulations begin with the very early universe—just a few million years after the Big Bang—and run forward, incorporating gravity and the dynamics of gas to try to reproduce the kinds of galaxies we see in the universe today. The results can be used to better understand astronomical observations and to answer fundamental questions about how galaxies form and evolve.

Hummels has long believed in the importance of public astronomy programs. He has clear memories of his father taking him out one night—he thinks he was in the second grade—to a sidewalk astronomy event in the parking lot of a school near his house. The experience of looking through a telescope for the first time to see Saturn and a star cluster left an indelible impression on him that eventually led him toward a career in astrophysics. "It was really exciting," he says. "And what we're going to be doing is very similar."

Hummels arrived at Caltech last fall, having just completed another postdoctoral fellowship at the University of Arizona. Prior to that, he was a graduate student at Columbia University in New York City, where he and another graduate student, Neil Zimmerman, became directors of the astronomy outreach program, which at the time hosted only a couple of small events each year. With unreliable weather and the city's significant light pollution often hampering planned observing events, Hummels and Zimmerman quickly realized that their programs needed to include another component—an event that would happen regardless of observing conditions. They added a lecture component, inviting fellow students and faculty members to give talks on their research. The events were a hit. Within a couple of years, the semimonthly events were drawing crowds of 150 to 250 people—the capacity of their venue.

Here at Caltech, Hummels is applying the same basic model. For the inaugural event on Friday, Evan Kirby, an assistant professor of astronomy at Caltech, will present a brief lecture titled "An Archaeological Road Trip with the Keck Telescopes" at 7 p.m. Immediately afterward, if the weather and viewing conditions permit, astronomers will help attendees observe interesting features of the night sky through telescopes on the north athletics field. There will also be an informal Q&A panel on gravitational waves inside following the lecture.

"It's fun for everybody," Hummels says. "Almost everyone has the experience of marveling at the night sky, whether it's from a scientific bent or a philosophical curiosity. As a researcher, I really enjoy it because as excited as you might be about your own topic, the slog of dealing with it day after day can grind you down. Going to these events is reinvigorating because it causes you to rediscover your field a bit."

In addition to the stargazing and lecture series, Hummels is also coordinating a sidewalk astronomy program that will involve Caltech astronomers setting up telescopes on Colorado Boulevard and encouraging passersby to take a look at the heavens. He set up a similar program at Columbia, on Harlem's 125th Street, and says the response was overwhelming. "It was so rewarding because a lot of the people walking down the street had never looked through a telescope before, and some of them were blown away by the experience," he says. "When you do that sort of thing, you are really reaching out to people who may be totally ambivalent toward science."

For Hummels, public education is what lies at the heart of his outreach efforts. "Having an educated populace is super important," he says. "I think it's extremely important that we, as scientists who are largely funded by publicly funded agencies, give back to the community. And I think astronomy lends itself very well as a tool for engaging the public in science education—plus it's entertainment!"

Hameetman Auditorium is located in the Cahill Center for Astronomy and Astrophysics at 1216 E. California Blvd. Stargazing will only be possible if the skies are clear. You can check the Astronomy Outreach page on the day of the event for weather status. No reservations are necessary to attend.