Building the World's Most Sensitive Detectors: A Conversation with Rana Adhikari 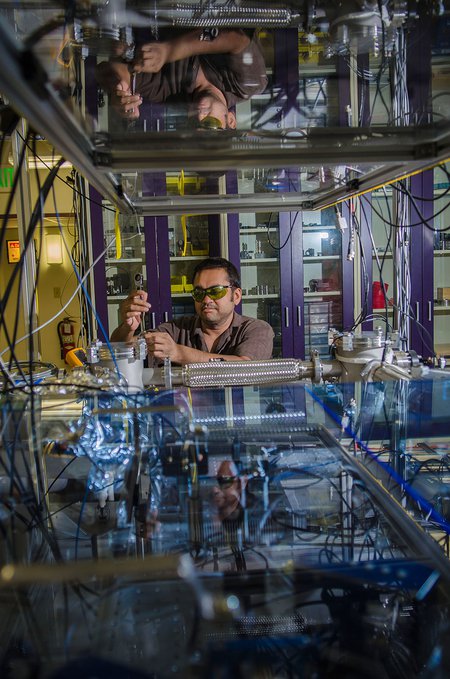 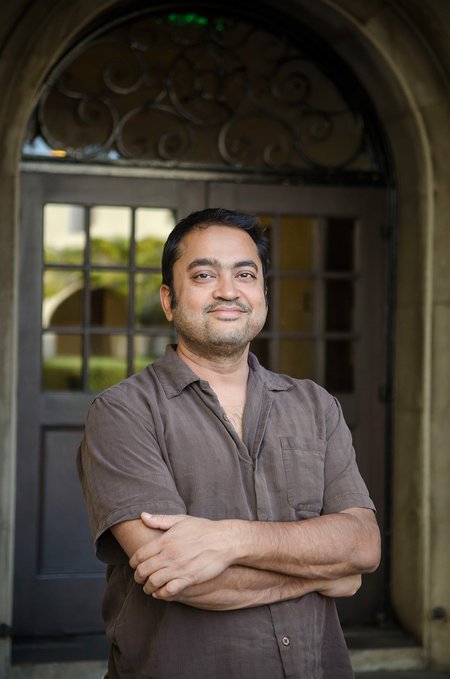 Caltech professor of physics Rana Adhikari has been on a singular quest for 15 years: to detect gravitational waves.

Gravitational waves—ripples in the fabric of space-time—are predicted by Einstein's theory of general relativity. Major astrophysical events such as the collapse of a binary system of neutron stars or black holes or one of each should release intense gravitational waves in the frequency range that we potentially might detect here on Earth. As theorized, gravitational waves are curious things; they move across the universe at the speed of light and pass right through everything they encounter without being affected as electromagnetic waves (such as light and radio waves) would be. And yet they are very weak compared to electromagnetic waves.

Scientists began to search for gravitational waves at the end of the 1960s, trying out a variety of technologies, including metal or ceramic bars that were designed to resonate at the proper frequencies when struck by gravitational waves. By the 1990s, the technology of choice was the laser interferometer, an L-shaped apparatus with two vacuum pipes four feet in diameter through which a laser beam passes. The laser's job is to sense the slightest motion in large glass mirrors hung at the far end of each pipe. Today the LIGO (Laser Interferometry Gravitational-Wave Observatory) project, a cooperative venture between Caltech and the Massachusetts Institute of Technology funded by the National Science Foundation, operates two laser interferometers whose vacuum pipes are four kilometers long: one in Livingston, Louisiana, and the other in Hanford, Washington. The detectors are currently offline while Advanced LIGO, slated to begin operation in 2014, is fitted into the apparatus.

So far the number of gravitational waves we have directly observed is zero.

Professor Adhikari, and indeed the entire LIGO team, is devoted to changing that tally in our favor. Adhikari recently sat down to answer a few questions about his work on LIGO and his experience of the students, staff, and faculty at Caltech.

How did you get started with the search for gravitational waves?

Whoever recruits you into this field says, "This is the best time to get in. You're getting in on the ground floor! The past has been a hard slog, but this is the perfect moment. In the next couple of years, boom! It's all going to play out." I heard that and thought, "Oh yes, I believe you. This is a great deal for me."

Now I say the same thing to potential recruits, but now it's true!

How do you feel about the fact that gravitational waves still haven't been detected?

It can be frustrating. Other astronomers have it a lot easier. Every time they point an instrument at the sky, they detect something. Meanwhile, LIGO has been waiting decades for anything, just one little blip. I went to an astronomy conference in San Francisco a while ago, and I swear, every single person who got up to give a talk said, "For six months we worked on this machine, and then we put it in a remote place in Africa or Chile, and as soon as we did, we saw this pulsar and this explosion. It was wonderful!" When I got up to give my talk, I pounded on the podium for a while and said, "What about me? I've been working on this thing for 15 years, and I've got nothing. Where's my signal?" People came up afterward and patted me on the back and said, "It's all right, it's going to happen for you too, don't worry."

Do you think you will eventually detect gravitational waves?

Yes, if our device is as sensitive as we believe it is, and if the kind of dramatic events that produce significant gravitational waves happen often enough.

I have extremely high confidence that these events are happening. In 1974, two radio astronomers, Russell Hulse and Joe Taylor, then at the University of Massachusetts at Amherst, observed a binary neutron-star system from a radio observatory in Puerto Rico. They and others have been tracking it ever since. The orbit of the stars is gradually decaying, which indicates the presence of gravitation. But more importantly, the decay is exactly as predicted by Einstein's theory. And we know that there are other events like this that would produce gravitational waves. People observe some such events using radio astronomy and optical astronomy. What we don't know is precisely how often they happen.

And you believe that if they happen, LIGO will detect them?

I think the main reason we stick with this effort is because our detectors are working like they should be. We can see a big piece of glass—a 40-kilogram mirror—move back and forth a distance equivalent to one-billionth the size of a hydrogen atom in response to a gravitational wave. You might say it could move by the size of a hydrogen atom and be believed. But one-billionth? Come on. It seems like this level of sensitivity can't be possible. When you tell people how sensitive LIGO is, it sounds like you're a nutcase—but we've measured it to be that precise.

With an instrument that sensitive, how do you avoid measuring everything else?

LIGO reacts to everything. If there's a lightning strike in Kansas, we see a magnetic pulse; if there's an earthquake anywhere in the world, our detector shakes around. Once, we had interference in our signal at the LIGO site in eastern Washington, and it was due to the release of a little extra water by a dam in western Washington.

Our whole concept is to get a thousand different kinds of sensors attached to LIGO: accelerometers, magnetometers, microphones, pressure sensors, devices to measure temperature, cosmic rays, everything. Our detector is the only thing in the world that will ever sense a gravitational wave, because it is so hard to detect. So if you see a blip in any other sensor, you're seeing something other than a gravitational wave.

Are you working to further increase the sensitivity?

All the time. For example, we originally decided to go with glass—fused silica—as the material for the mirrors. People have been studying glass for hundreds of years; it has some almost magical properties that may help LIGO to detect gravitational waves.

More recently we've learned that there may be an even quieter material: silicon crystal. Silicon has some difficult properties, but they vanish at about 120 degrees Kelvin, or about minus 150 degrees centigrade. So now we are looking at developing silicon detectors and keeping them in a cryogenic atmosphere. Unfortunately, this means completely revamping LIGO. So while the next generation of LIGO—Advanced LIGO—is online, we will already be working on its successor.

How are students involved in your work on LIGO?

From the beginning, I thought that if we were going to make LIGO work, we had better get a huge gang of students from Caltech working on this project. That's what makes it all go. My students work from . . . well, sometime after lunch until the sun rises. Starting several years ago, we set students to work on prototyping new, speculative ideas for LIGO. Some of these ideas never add up to anything, but others that we originally thought wouldn't be of any use at all are now the standard vanilla technology of LIGO. We ask ourselves, "How did we ever live without this?"

One of these student projects was to imagine putting a bunch of microphones and vibration sensors around LIGO. Then, without trying to determine which events were creating which reactions, we simply inputted the signals into a computer and told it to subtract the noise out of the interferometer. We found out that there were already learning algorithms like this created by people for other reasons. In fact, to get rid of all kinds of noise in the interferometer we now use similar learning algorithms to those used in noise-canceling headphones.

We have international collaborators in Japan, Italy, France, Germany, Australia, and India, so we always have undergraduate and graduate students coming from these places. Our labs are an international mix of people of different ages and levels. And everyone is really into the project. I don't have to do any cheerleading; they're already self-motivated.

What excites you about Caltech?

Getting to work with the people here. They're all really bright and energetic and thinking about things all the time. Before physics, I had several other jobs, and mostly we tried to figure out how to do the least possible amount of work until five o'clock came around and we could get out. Here the work is so exciting that you can easily lose track of time and leave six hours late.

Caltech is a special place because of its intensity, and also because of all the expertise that is around. We have geophysics, aeronautics, applied physics . . . And the teaching is wonderful. For the past three years I have taught electromagnetism to nonphysics majors. It's full of practical questions like "What is this thing?" I learn a lot from teaching that.