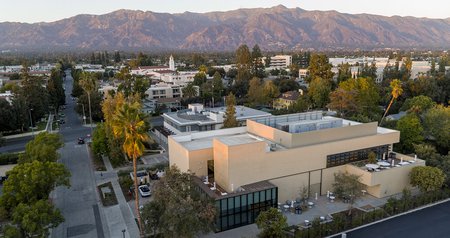 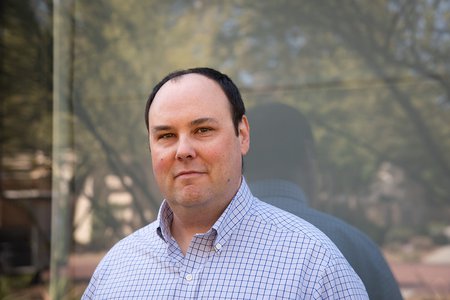 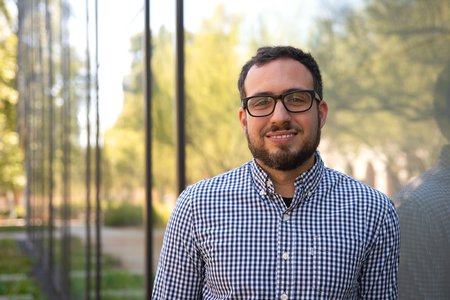 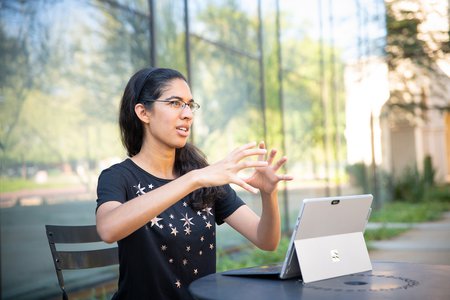 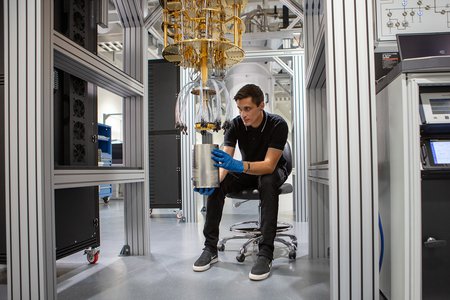 This past year, a new two-story building took shape in the northeast corner of the Caltech campus. Though modest in design, what takes place inside the structure could transform the future of computing. The building is the AWS Center for Quantum Computing, the result of a partnership between Caltech and Amazon Web Services, the cloud-computing branch of Amazon. The goal of the collaboration is to create quantum computers and related technologies that have the potential to revolutionize data security, machine learning, medicine development, sustainability practices, and more.

"Most people know of the company Amazon. We can do a lot of shopping there, but it's also a powerhouse in engineering," says Fernando Brandão, Bren Professor of Theoretical Physics at Caltech and head of quantum algorithms at AWS. "Amazon Web Services is the biggest cloud provider on Earth today. They are thinking about how they can make computing simpler and better for people who use AWS. And they're also thinking about the next step, and how to do computing and cloud computing in the next five or 10 years."

The collaboration will help bridge the commercial side of quantum computing with the fundamental research taking place at Caltech, which has a long history of breakthroughs in the quantum sciences.

"AWS will benefit from the ideas percolating here on campus," says Oskar Painter (MS '95, PhD '01), John G. Braun Professor of Applied Physics and Physics at Caltech and head of quantum hardware at AWS. Painter says quantum computing is still a very young technology, so it is crucial for development efforts to be directly connected to the latest research in academia.

"If we were to just take today's ideas and go forward with them, we would create a dinosaur of a quantum computer," Painter says. "We need to be closely connected and tied into these basic research efforts."

This is the first corporate-partnership building on the Caltech campus, and it reflects Caltech's interests in bringing fundamental science to the marketplace. Through scholarships, internships, and seminars, the center will also support Caltech students and early career scientists.

"Students will have the opportunity to interact with cutting-edge research by way of the center being located at Caltech. This will be pretty amazing for students," says Painter. "And AWS can tap into that talent. Those are the future engineers and scientists who are going to build quantum computers."

One of the biggest challenges in building quantum computers is scaling them up. Because the technology behind the computers is so complex, current prototypes are still in experimental stages. For quantum computers to truly exceed what can be done with today's classical computers—a milestone referred to as quantum advantage—they will need to be much larger.

For instance, today's rudimentary quantum computers work on only a few dozen qubits—the quantum equivalent of bits, or the 1's and 0's that make up the language of classical computers. Researchers want to build quantum computers with thousands of qubits and more.

"Classical computers have billions and even trillions of bits, and that's where we eventually would want to be with qubits," says Brandão.

The ability of qubits to take on multiple states at once is what gives quantum computers the potential to be exponentially more powerful than classical computers for certain types of problems, including those in chemistry, finance, cryptography, and more. But that power comes with drawbacks. Qubits are very fragile; any slight perturbations, such as vibrations or heat, can nudge them out of superposition, a phenomenon known as decoherence. The key to building successful quantum computers of the future lies in controlling these errors.

Caltech is well suited as a hub of quantum innovation thanks to its rich history in the field. The late Richard Feynman, a longtime Caltech physics professor, was one of the first to propose quantum computers. In a 1981 lecture, he famously explained that there are limits to simulating systems in physics with classical computers because "nature isn't classical, dammit, and if you want to make a simulation of nature, you'd better make it quantum mechanical, and by golly, it's a wonderful problem because it doesn't look so easy."

In 1994, Caltech alumnus Peter Shor (BS '81), then at Bell Labs, developed a quantum algorithm that can factor large numbers in very short periods of time, demonstrating the enormous power of the future technology. For instance, a quantum computer would be able to factor a 2,048-digit number in eight hours, whereas this would take a classical computer about 300 trillion years. "When I heard about this, I was awestruck," recalled Amazon scholar John Preskill, the Richard P. Feynman Professor of Theoretical Physics and the director of the Institute for Quantum Science and Technology (IQIM), in a 2013 Caltech article. Shor also helped pioneer the development of quantum error-correction codes.

Caltech's Jeff Kimble, the William L. Valentine Professor of Physics, Emeritus, was among the first, in 1998, to achieve quantum teleportation, whereby information was sent from one light beam to another via entanglement, a process in which particles are connected without being in direct contact with each other. In 2008, he and his colleagues were also the first to store entangled quantum states in a memory device.

"I came to Caltech as a graduate student to study with people like Jeff Kimble, who was measuring small atom-photon quantum systems with exquisite sensitivity, and who was developing quantum protocols with these systems that might ultimately be used to create a form of quantum internet one day," says Painter.

Annika Dugad, a current graduate student at Caltech, says having the AWS center on campus brings even more of a buzz to the cutting-edge quantum research happening at Caltech. Dugad is among several scholars whose graduate studies are being funded by Amazon. She is using the support to study the black-hole information paradox, a mystery first illuminated by Stephen Hawking in the early 1970s that asks what happens to information that gets trapped inside a black hole. Ultimately, Dugad says she would like to take what she has learned and apply it to more practical questions in quantum computing.

"Not many campuses have this type of quantum center," she says. "I know there's an outlet where I can go to collaborate on experiments. Academia is slower paced by nature, but in industry, they have deadlines and can really get things going."

"There's a new paradigm in computing," says Brandão. "It's not just about making our current computers a little bit faster or a little bit better as we have been seeing in the last 50 years at least. It's about building a completely new kind of computer. Quantum computing is very early days, but I think it's also very exciting."