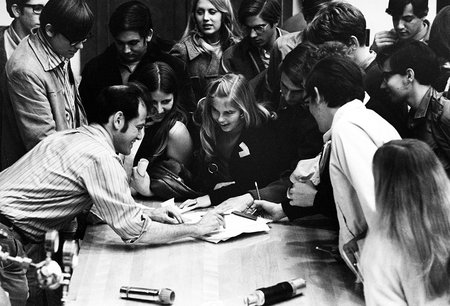 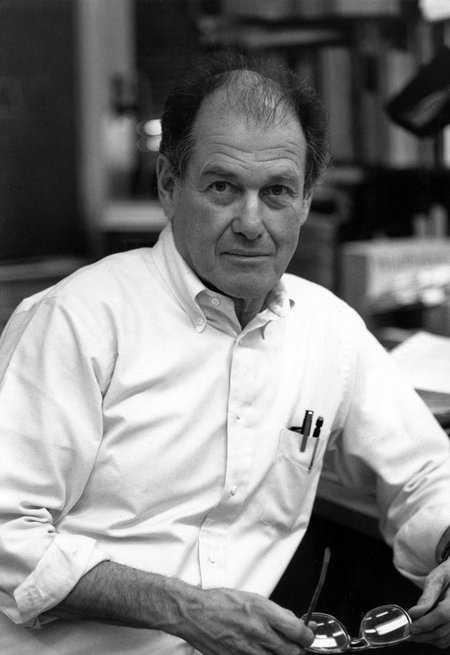 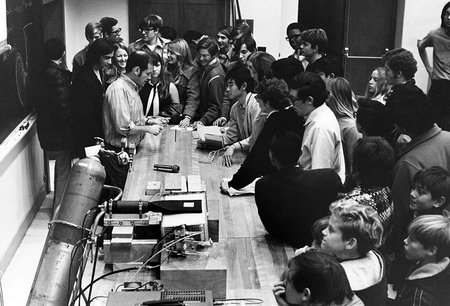 Jerome "Jerry" Pine, a Caltech professor of physics, emeritus, passed away on November 8, 2017. He was 89 years old. Pine served as a professor at Caltech for more than 50 years. In his early career, he undertook research in particle physics at several particle colliders, improving our understanding of the structure of elementary particles. Later, he transitioned into biophysics, developing new ways to study and visualize living neural cells. Pine was also passionate about science education.

"Being an educator was extremely important to Jerry," says Nobel Laureate Barry Barish, the Ronald and Maxine Linde Professor of Physics, Emeritus, and Pine's collaborator during the 1960s on particle physics experiments. "He did education outreach before it was popular. To him, students learned science by doing it, and he would encourage them to do hands-on experiments in the lab."

In the 1960s, Pine did research at several particle colliders, including the Brookhaven National Laboratory, the SLAC National Accelerator Laboratory, and the Fermi National Accelerator Laboratory. While at Brookhaven, Pine worked on experiments in which anti-protons were scattered off other protons, annihilating each other and creating electron and positron pairs. (An anti-proton is the negatively charged version of a proton, which is positively charged, while a positron is the positive equivalent of a negatively charged electron.) This provided a different view of the proton, which helped lead to our current understanding of its structure.

At SLAC, Pine built a device that generated high-energy positrons for experiments comparing positrons to electrons to study the structure of the proton at high energies. The research was related to work subsequently done at the facility by Richard Taylor, Henry Kendall, and Jerome Friedman, who won the Nobel Prize in Physics 1990 for experimental evidence of the quark structure of the proton.

Beginning in the late 1970s, Pine shifted his research focus and transitioned into biophysics, using physics to develop new ways of studying and imaging live brain cells, or neurons. He is credited with inventing a microelectrode array that allows researchers to monitor the growth of neurons in a petri dish.

Together with Caltech's Yu-Chong Tai, the Anna L. Rosen Professor of Electrical Engineering and Mechanical Engineering, Pine developed a neural chip to study the electrical communication between growing neurons.

"Jerry was a tenacious scientist," says Tai, "He never quit anything he did in the lab—his mental strength was unbelievable. He was the driving force behind many of our projects."

"Jerry had a deciding influence on my career," says Markus Meister, the Anne P. and Benjamin F. Biaggini Professor of Biological Sciences at Caltech. "When I met him, Jerry had started to pursue neuroscience, first as a night job, then full time. I distinctly remember the first experiment we did together in the lab of Denis Baylor at Stanford. In the room were Jerry, Denis, myself, and a frog retina sitting in one of Jerry's exquisite multielectrode chambers. As we flashed the ceiling lights on and off, the retina's nerve cells were joyously sending spikes down the electrodes to Jerry's home-built multichannel amplifier. We had an immediate sense that something good just happened, but we did not anticipate that this kind of experiment would feed our scientific curiosity for a couple of decades to come. Jerry's original circuit board is now back at Caltech in my lab's small museum."

In addition to research, Pine was heavily involved with science education and outreach. He developed a freshman physics course at Caltech that emphasized hands-on experimentation. Students received build kits from the start and would do part of the experiments in their own rooms. Their final experiment involved building a microwave transmitter and receiver.

"Jerry believed that part of an undergraduate education should be learning to build things," says Fiona Harrison, the Kent and Joyce Kresa Leadership Chair of Caltech's Division of Physics, Mathematics and Astronomy. "I remember teaching the freshman course that Jerry developed. It was great: students put together circuits and experiments from simple materials—but not in a 'cookbook' way. They learned to troubleshoot and to debug, and at the same time these projects demonstrated fundamental physics principles."

In the 1980s, Pine co-founded the Caltech Precollege Science Initiative (CAPSI)—a K–12 program that collaborated with the Pasadena Unified School District to serve as a national model for systemic reform of science education. The program avoided old-fashioned techniques like rote memorization and lectures, and instead based its science learning on hands-on experimentation. The program also focused on educating teachers throughout California as well as in other states and internationally, again using the same hands-on approach rather than lectures. CASPI won a grant from the National Science Foundation in 1995 for $5 million to expand into other California schools using Pasadena teachers as mentors. Dozens of Caltech graduate students, postdoctoral fellows and faculty would also volunteer their time to help with educating the teachers.

Pine championed the international development of inquiry-based science teaching, working with the late Nobel Laureate Georges Charpak, who, with other members of the French Academy of Sciences, launched their own version of this brand of teaching. The program was later adopted by many other countries. As Pine once said, "To change the system you have to affect all of it."

"I consider myself lucky to have known Jerry Pine, a very rigorous, dedicated, hard-nosed, and strong-spirited scientist," says Maria Spiropulu, the Shang-Yi Ch'en Professor of Physics at Caltech. "He was an admired researcher, a remarkable mentor, a revolutionary teacher, and a good friend to me ever since I arrived at Caltech. I will miss him and his wisdom, inquisitiveness, sharpness, and care."

Pine also served on many science education advisory boards and committees for various groups, including the National Center for Improving Science Education from 1988 to 1995, and the National Academy of Sciences' working group on science teaching standards from 1992 to 1995.

Pine is survived by his wife Nancy; his three children Zachary and Samuel Pine and Linda Fortney; six grandchildren; his siblings Susan and Steven Pine; and Jazz, the beloved family cat.