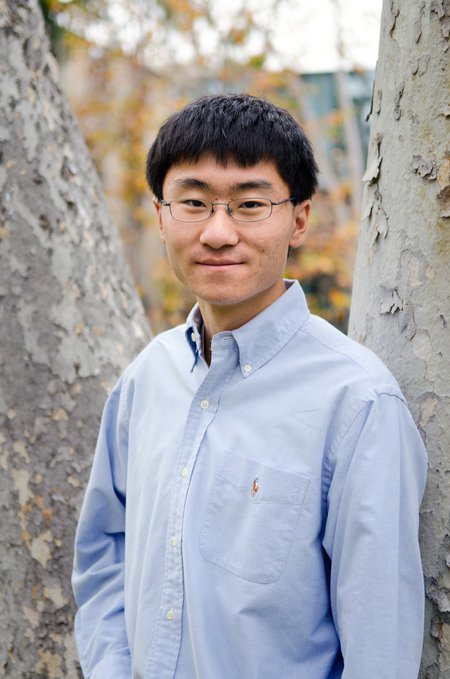 Caltech senior Andrew Meng has been selected to receive a Churchill Scholarship, which will fund his graduate studies at the University of Cambridge for the next academic year. Meng, a chemistry and physics major, was one of only 14 students nationwide who were chosen to receive the fellowship this year.

Taking full advantage of Caltech's strong tradition of undergraduate research, Meng has worked since his freshman year in the lab of Nate Lewis, the George L. Argyros Professor and professor of chemistry. Over the course of three Summer Undergraduate Research Fellowships (SURFs) and several terms in the lab, Meng has investigated various applications of silicon microwire solar cells. Lewis's group has shown that arrays of these ultrathin wires hold promise as a cost-effective way to construct solar cells that can convert light into electricity with relatively high efficiencies.

Meng, who grew up in Baton Rouge, Louisiana, first studied some of the fundamental limitations of silicon microwires in fuel-forming reactions. In these applications, it is believed that the microwires can harness energy from the sun to drive chemical reactions such as the production of hydrogen and oxygen from splitting water. Meng's work showed that the geometry of the microwires would not limit the fuel-forming reaction as some had expected.

More recently, Meng has turned his attention to using silicon microwires to generate electricity. He is developing an inexpensive electrical contact to silicon microwire chips, using a method that facilitates scale-up and can be applied to flexible solar cells.

"Andrew is one of the best undergraduates that I have had the pleasure of working with in over a decade," says Lewis. "He excels in academics, in leadership, and in research. I believe he is truly worthy of the distinction of receiving a Churchill Fellowship. "

As he pursues a Master of Philosophy degree in chemistry at the University of Cambridge over the next year, Meng will work in the group of theoretical chemist Michiel Sprik. He plans to apply computational methods to his studies of fuel-forming reactions using solar-energy materials.

"I'm very grateful for this opportunity to learn a computational perspective, since up until now I've been doing experimental work," Meng says. "I'm very excited, and most importantly, I'd like to thank Caltech and all of my mentors and co-mentors, without whom I would not be in this position today."

According to the Winston Churchill Foundation's website, the Churchill Scholarship program "offers American citizens of exceptional ability and outstanding achievement the opportunity to pursue graduate studies in engineering, mathematics, or the sciences at Cambridge. One of the newer colleges at the University of Cambridge, Churchill College was built as the national and Commonwealth tribute to Sir Winston, who in the years after the Second World War presciently recognized the growing importance of science and technology for prosperity and security. Churchill College focuses on the sciences, engineering, and mathematics." The first Churchill Scholarships were awarded in 1963, and this year's recipients bring the total to 479 Churchill Scholars.

Each year, a select group of universities, including Caltech, is eligible to nominate students for consideration for the scholarship. Meng is the seventh Caltech student to have won the award since the year 2000. A group of Caltech faculty members and researchers work with Lauren Stolper, director of fellowships advising, to identify and nominate candidates. This year, the members of the group were Churchill Scholar alumni John Brady, the Chevron Professor of Chemical Engineering and professor of mechanical engineering; Mitchio Okumura, professor of chemical physics; Alan Cummings, senior research scientist; and Eric Rains, professor of mathematics.