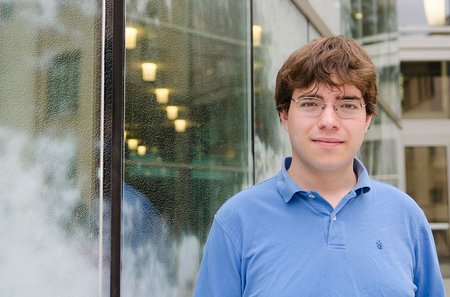 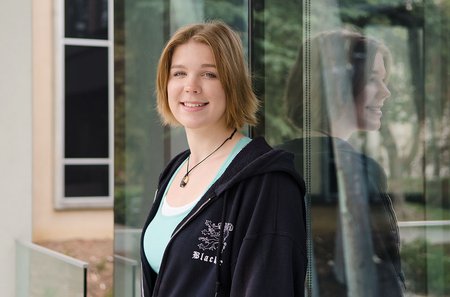 Two Caltech seniors, Adam Jermyn and Kerry Betz, were named as winners of this year's Library Friends' Senior Thesis Prize. The Thesis Prize is intended to encourage undergraduates to complete a formal work of scholarship as a capstone project for their undergraduate career and to recognize sophisticated in-depth use of library and archival research. For their achievement, recipients of the $1,200 prize are listed in the commencement program.

Caltech faculty nominate seniors whose theses they deem to be deserving of the prize. Nominated students then supply a research narrative that explains their research methodology, detailing not only the sources they used, but the way they obtained access to them.

Adam Jermyn, a physics major from Longmeadow, Massachusetts, won the prize for his thesis titled "The Atmospheric Dynamics of Pulsar Companions." The Library Friends committee described it as a "tour de force in its breadth of scholarship, creativity and significance," and Jermyn's faculty adviser Sterl Phinney, professor of theoretical astrophysics and executive officer for astronomy, said in his nomination that the thesis is "comparable to the best PhDs in impact and innovation."

Jermyn's work is a study of the ways in which the radiation emitted from pulsars changes the atmospheres of other nearby stars. Pulsars are a highly magnetized and rapidly rotating type of neutron star, the dense remnants of a star gone supernova. They often orbit closely together with a low-mass "companion star" that can receive enormous amounts of radiation from the nearby pulsar.

"It's been a really fantastic experience. My mentor, Professor Phinney, has been amazing at encouraging me in productive directions and enthusiastically went along with me when I wanted to go off in a strange direction on a hunch," Jermyn says. "You think you've rounded the corner and found the answer, only to realize that you've just walked into more rich and complicated phenomena."

Jermyn, also the recipient of a Hertz Fellowship, a Marshall Scholarship, and a National Science Foundation Graduate Research Fellowship, will start his graduate work at the University of Cambridge in the fall.

Kerry Betz, a chemistry major from Boulder, Colorado, won the prize for her thesis titled "A Novel, General Method for the Construction of C-Si Bonds by an Earth-Abundant Metal Catalyst." Robert Grubbs, the Victor and Elizabeth Atkins Professor of Chemistry and Betz's faculty adviser, praised the thesis in his nomination for its "significance, creativity, and novelty."

Betz's work concerns the use of a new catalyst to form carbon-silicon bonds through a process called silylation. The newly discovered catalyst is highly efficient and can operate at room temperature and pressure. Traditionally these reactions require expensive and inefficient precious metal catalysts, such as platinum or palladium. Betz's catalyst is made from the abundant metal potassium, which is more effective than state-of-the-art precious metal complexes at running very challenging chemical reactions.

"I've done this research over the last three years, and I really enjoyed how writing it up brought it all together," says Betz. "Writing up my work revealed new questions and directions to pursue. It showed me how unpredictable and exciting research can be." She will continue her research at Caltech for a year and will then begin graduate studies at Stanford University in the fall of 2016.