The Caltech Space Challenge: Mission to a Martian Moon 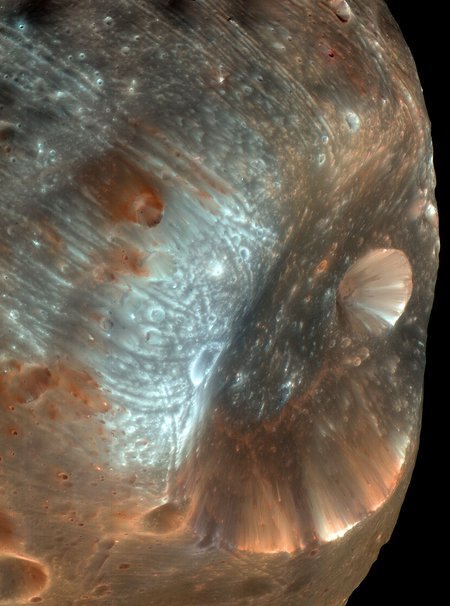 The mission: travel to one of Mars's two moons, explore its surface, collect some rocks, and return to Earth in one piece. Now plan it—in five days.

Dozens of students from Caltech and around the world converged on campus during the last week of March to do just that, compete in the Caltech Space Challenge, which pits two teams against each other to design the best manned space mission.

"It was an intense, challenging, and exciting experience," says Melissa Tanner, a fourth-year graduate student in mechanical engineering at Caltech and member of Team Voyager, which faced off against Team Explorer.

The Space Challenge, which was led by aeronautics graduate students Nick Parziale and Jason Rabinovitch, featured lectures and workshops given by expert rocket scientists from Caltech, the Jet Propulsion Laboratory, and the aerospace industry. The two 16-member teams were even treated to an appearance by astronaut Buzz Aldrin, the second human to have walked on the moon. "I think one of the coolest parts of the experience was having world-class mentors," Tanner says.

Most of the week, however, was filled with hard work and little sleep. The students—a mix of undergraduates and graduates—had to plan and consider every aspect of long-term space travel, from choosing a propulsion system to keeping the astronauts healthy and fit. (Both teams emphasized the importance of exercise; Team Voyager proposed mandatory Jazzercise classes.)

Landing on a martian moon is considered a stepping-stone toward the ultimate goal of landing a human on Mars and was one of the recommendations that the U.S. Human Space Flight Plans Committee, an independent review commissioned by the White House, made in 2009. A round-trip to one of Mars's moons is much easier than one to Mars, primarily because Mars's gravity is so much stronger than that of its moons. Landing on any planetary body is a difficult and harrowing task—the Curiosity rover famously went through a landing sequence akin to a Rube Goldberg machine and was dubbed the "seven minutes of terror." And, no previous Mars mission—let alone a manned one—has ever landed on the surface and returned to Earth.

The Martian moons—Phobos and Deimos—are like asteroids, with gravity so weak that a spacecraft can approach one of the moons and grab onto its surface. The gravity on Phobos—the larger of the two, yet with a radius of just 11 kilometers (roughly 7 miles)—is so slight that an object dropped from 1 meter above its surface would take more than 18 seconds to "fall."

The Space Challenge's 32 participants came from 21 universities and 11 countries, and were chosen from 175 applicants. They were selected because they brought a particular skill or expertise to their team. For example, Tanner's research at Caltech is in robotics; in particular, she works on the Axel rover, which is a tethered, two-wheeled robot designed to explore cliffs and other extreme terrain on other planets. Because of that expertise, she helped her team determine how its astronauts would explore the surface of a martian moon.

"I think the most rewarding part was meeting all these other people who know so much," says Jay Qi, a first-year mechanical engineering graduate student at Caltech and a member of Team Explorer. "It was really crazy how much I learned just from talking to people."

Although members from the two teams interacted freely—some of the visiting students even roomed with opposing team members—they were careful not to influence each other's designs so as to maintain the spirit of competition, Qi says.

Still, because both teams were faced with the same problems, they often came up with the same solutions. Both teams ended up with similar mission designs, choosing to go to Phobos, for example, because its bigger size offered potentially more interesting scientific discoveries. And both decided to use a multistage spacecraft assembled in low-Earth orbit that would depart for a six-month trip to Phobos in April 2033. Furthermore, in each plan, the spacecraft would separate into two parts: one that remained in orbit around Phobos and a second—equipped with robotic claws to cling onto the moon's surface—that would transport two astronauts to the moon. After exploring Phobos for about a month, the astronauts would return home.

But there were many differences between the two mission plans. For example, while Team Voyager opted to send three astronauts, the Explorer mission wanted to send four. Team Voyager also included a more detailed robotic precursor mission that would visit both Phobos and Deimos, whereas Team Explorer's manned mission itself included exploring robots.

A group of jurors consisting of experts from Caltech, JPL, and the aerospace industry evaluated the two teams based on their final presentations and reports. The competition was close, said lead juror Joe Parrish, deputy manager of the Mars Program Formulation Office at JPL. "It was never immediately obvious which team was going to prevail," he said at the closing banquet held at the Athenaeum. "Both teams did an unbelievable job." The jury went back and forth but finally decided that Team Voyager presented the better proposal, awarding it a bonus to the stipend that each member received to support his or her trip to Pasadena.

Caltech graduate students Prakhar Mehrotra and Jonathan Mihaly came up with the Caltech Space Challenge; the first challenge, held in 2011, was to plan a manned mission to a near-Earth asteroid. The two faculty advisors for the program are Guillaume Blanquart, assistant professor of mechanical engineering, and Joseph Shepherd, the C. L. Kelly Johnson Professor of Aeronautics and Professor of Mechanical Engineering. The program is organized by the Graduate Aerospace Laboratories of the California Institute of Technology (GALCIT) and supported by Caltech, JPL, the Keck Institute for Space Studies, and corporate and individual sponsors.