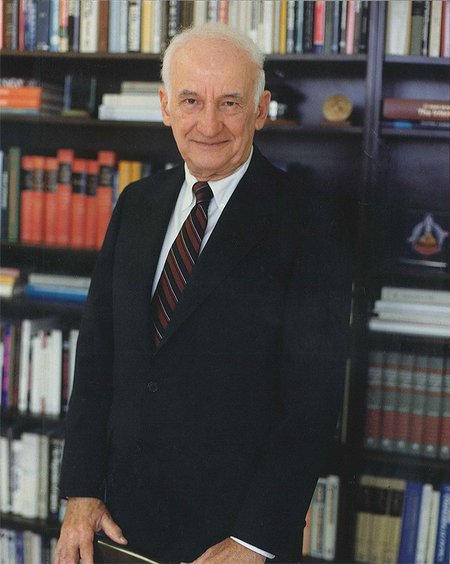 Alumnus and life member of the Board of Trustees Simon "Si" Ramo (PhD '36), a founding giant of the aerospace industry and chief architect of the nation's intercontinental ballistic missile system, passed away on June 27, 2016. He was 103.

First appointed to the Caltech Board of Trustees in 1964, Ramo was elected a Life Member of the board on May 7, 1985, in which capacity he served Caltech until the time of his death. During his active service on the board, Ramo served as vice chair and chair of the Nominating Committee, and as a member of the Investment Committee and the Jet Propulsion Laboratory Committee.

"Si lived the Caltech dream. He was a scientist, entrepreneur, educator, advisor, trustee, benefactor, and friend," says David L. Lee (PhD '74), chair of the Caltech Board of Trustees. "His life was dedicated to an unflinching search for solutions to a wide array of challenges. He will be missed by us all."

"Si Ramo was not only a great leader, but also an important mentor to many. Among thousands of others, he had an important influence on my life," says Thomas Everhart, president emeritus and professor of electrical engineering and applied physics, emeritus, at Caltech. "The nation, Caltech, and the many other organizations that Dr. Ramo provided insight, leadership, and personal support to, have lost a great friend. We are all richer for having known him."

Ramo joined the General Electric Research Laboratories in Schenectady, New York, in 1936 and accumulated 25 patents before turning 30. He was a pioneer in microwave transmission and detection equipment and was the first researcher in the U.S. to produce microwave pulses at the kilowatt level. He developed GE's electron microscope, published the first book on microwave electricity, and authored a book on electromagnetic fields and waves that for 50 years was a leading text in universities worldwide.

In 1946, Ramo joined Hughes Aircraft Company in Culver City, California, where, as vice president for operations, he developed radar, navigation, computer, and other electronics systems for aircraft. He also led the development of their Falcon air-to-air guided missiles, used in the Korean War.

Along with engineer Dean Wooldridge, Ramo left Hughes in 1953 to found the Ramo-Wooldridge Corporation. The company was responsible for developing Atlas, Titan, and Minuteman intercontinental ballistic missiles (ICBMs)—with Ramo serving as the chief scientist from 1954–58 of the U.S. ICBM program—and produced other defense and research missiles, including those that carried exploratory probes into space in the late 1950s and 1960s. Ramo-Wooldridge merged with Thompson Products in 1958 to become Thompson Ramo-Wooldridge, Inc. (later shortened to TRW).

At TRW, Ramo served vice chairman of the board of directors and chairman of the board's executive committee before retiring. He created TRW's Space Technology Laboratories, which won NASA's first spacecraft contract and built the Pioneer 1 probe, which, on October 11, 1958, became the first spacecraft launched by NASA. Under Ramo's guidance, TRW was a pioneering developer of missile systems and spacecraft, including the Pioneer 10 and Pioneer 11 probes to Jupiter and the outer solar system; instruments for the Viking 1 and Viking 2 martian landers; and NASA's Compton Gamma Ray Observatory and Chandra X-ray Observatory, among other projects.

He served on numerous corporate and university boards and in government advisory roles that included positions on the National Science Board, the White House Council on Energy R&D, the Advisory Council to the Secretary of Commerce, and the Advisory Council to the Secretary of State for Science and Foreign Affairs. Ramo was chairman of Gerald Ford's President's Advisory Committee on Science and Technology and was Science Adviser to the President of the Republic of China under Ronald Reagan.

The recipient of numerous honors and honorary degrees, Ramo was awarded the Presidential Medal of Freedom in 1983, the National Medal of Science in 1979, and the Founders Medal of the Institute of Electrical and Electronics Engineers in 1980. He was named a Distinguished Alumnus of Caltech in 2012.

In December 2013, Ramo was awarded patent 8,606,170 for a computer-based learning invention, making him, at 100 years old, the oldest person to ever receive a U.S. patent. He was also the author of many books, on topics ranging from microwaves and communication electronics, to management, to tennis.

Virginia Ramo, his wife of seven decades, preceded him in death in 2009. He is survived by sons James and Alan.