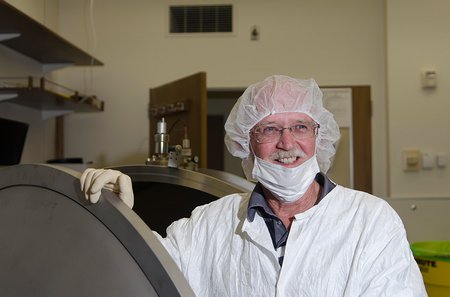 The 60th Annual Staff Service Awards will be presented in Beckman Auditorium on Thursday, June 4, at 10 a.m. During the ceremony, nearly 250 staff members whose service ranges from 10 to 45 years will be honored for their commitment to Caltech. A full list of awardees is online.

Among the honorees is Robert A. Taylor, who has worked at the Institute for the last 45 years, most recently in the Division of Physics, Mathematics and Astronomy (PMA) for the Laser Interferometry Gravitational-Wave Observatory (LIGO) project. We spoke with Taylor about his four-and-a-half decades at Caltech.

Can you tell us how you originally came to Caltech and a little about your career?

In 1969, I was attending Pasadena City College, majoring in electronics analysis. I came to class one evening and my instructor, who was the chief engineer for the Seismology Laboratory at Caltech, asked if I would like to work for Caltech. I said yes. The job was in the Division of Geology and Planetary Sciences with Dr. Anderson [Don L. Anderson, the late Eleanor and John R. McMillan Professor of Geophysics, Emeritus, and former director of the Seismology Lab] to help build the seismometer that was to go to the moon.

In GPS, I enjoyed working with the students on their thesis projects and on other projects that have come along over the years. Some of those projects have taken me to places that most people never get to go. I observed an atomic bomb detonation in Nevada, serviced a seismic station at the base of the Andes Mountains in Peru, and dove on coral reefs off Sumatra, Indonesia. In the deserts of California, Arizona, and New Mexico, I did experiments with the first rocks brought back from the moon. That is just the first half of my time here at Caltech.

The second half is still ongoing. In 2001, I transferred to PMA, to continue my journey with LIGO, running the ultrahigh-vacuum bake lab. The purpose is to clean the parts that go into the vacuum envelope of the interferometer. LIGO is by far the most interesting project I have worked on since I have been here at Caltech.

What were your first impressions of Caltech?

Quite frankly, I was a bit intimidated at first. I had never worked in an academic atmosphere before with the kind of prestigious people that I come in contact with on a daily basis. For example, the first office that I had was across the hall from Dr. Charles F. Richter [developer of the Gutenberg-Richter law for measuring the size of an earthquake]. Could that be more awesome? But I soon realized that the people around me were accepting me as part of the team at Caltech.

What has been the most exciting moment for you so far at Caltech?

There are two moments that stick in my mind. The first is the research that we did in Indonesia with Dr. Sieh [Kerry Sieh, formerly Caltech's Robert P. Sharp Professor of Geology], taking coral samples from reefs in the Batu Islands off Sumatra. The other was the first time I visited the LIGO Livingston Observatory and saw firsthand a full-size interferometer.

What has changed the most for you here over the last 45 years?

I think what has changed most is my idea of what is possible. At Caltech, the possibilities are limitless.

How much longer do you think you will stay?

Let's just put it this way: I love what I do. I feel like the luckiest person alive to have been invited to participate and be a part of Caltech.