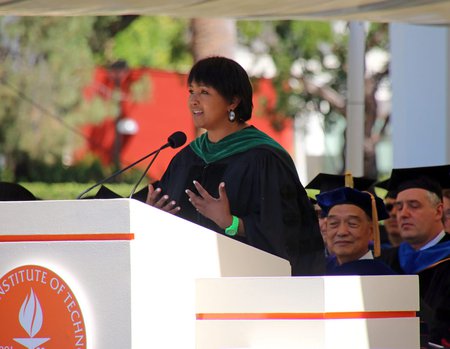 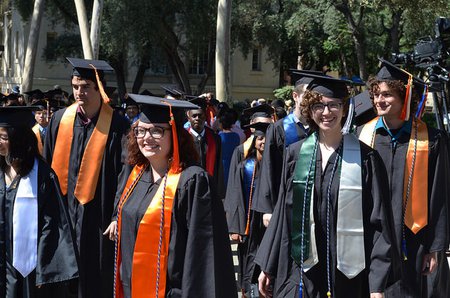 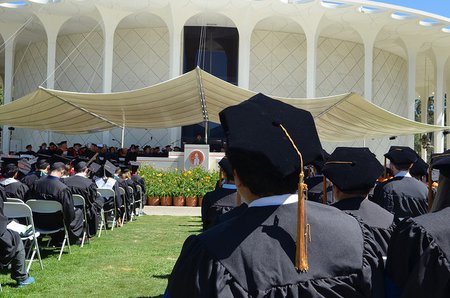 On Friday, June 16, David Lee (PhD '74), chair of the Caltech Board of Trustees, opened the Institute's 123rd annual commencement ceremony with a reminder that discovery is a never-ending process. "Accomplishment and discovery never close the door on inquiry. Rather, they open new worlds to explore," he remarked. "So too does the end of your time at Caltech mark the beginning of new challenges and triumphs in your studies, in your careers, and in your lives among the friends and family with us today."

Lee noted some of the past year's achievements, such as the discovery of a link between the microbiome and Parkinson's disease, the third LIGO (Laser Interferometer Gravitational-wave Observatory) detection of gravitational waves, the creation of the Tianqiao and Chrissy Chen Institute for Neuroscience at Caltech, and the final flybys of Saturn by the Jet Propulsion Laboratory's Cassini mission. He also thanked Edward M. Stolper, the William E. Leonhard Professor of Geology and the Carl and Shirley Larson Provostial Chair, for his service to Caltech as provost, as Stolper's tenure comes to a close this year.

The 2017 Caltech commencement speaker was Mae Jemison, an engineer, physician, and NASA astronaut.

"I believe that life is best when we live deeply, and look up," Jemison said to the graduates. "You don't have to go up to space to feel deeply, to feel infinite. If we dig deep we have the ability to do wonderful things."

Looking up, Jemison said, allows us to remember that there is more that connects us than divides us. "Connection to the greater universe is something I hope for you throughout your lives. Never forget to look up and keep the bigger picture in mind. Look up at the sky, the moon, the stars when you need to recharge. Let the gravity of Earth give you a warm hug when you're feeling low. Look up to remember what inspires you. Keep the sparkle in your eyes, keep it long past graduation."

In his closing charge to the graduating class, Caltech president Thomas Rosenbaum, the Sonja and William Davidow Presidential Chair and professor of physics, remarked, "You will move through life shaped by your time here, creating new spaces for yourself. I wish you wholeness and magic on your journey forward."

In addition to 254 Bachelor of Science, 122 Master of Science, one Engineer, and 180 Doctor of Philosophy degrees, four students were honored with prizes at the ceremony.

Nikita Sirohi graduated with a BS in computer science and was the recipient of the 32nd annual Mabel Beckman Prize in recognition of "academic and personal excellence, contributions to the Institute community, and outstanding character and leadership." In the fall, Sirohi will join Pure Storage, a data storage company in Mountain View, California.

Robert (Bobby) Sanchez graduated with a BS in geophysics with a minor in environmental science and engineering and was the recipient of the Hinrichs Memorial Award. The award is presented to the senior or seniors who have made the greatest contribution to the student body during their undergraduate years, "students of outstanding character, leadership, and responsibility." He plans to attend the Scripps Institute of Oceanography in La Jolla, California, where he will pursue a PhD in physical oceanography.

The George W. Housner Award was presented to Suchita Nety. The prize is given to a senior who has demonstrated "excellence in scholarship and in the preparation of an outstanding piece of original scientific research." Nety received a bachelor's degree in chemistry with a minor in English and will attend the MD/PhD program at the Harvard-MIT Division of Health Sciences and Technology starting this fall.

Finally, the Milton and Francis Clauser Doctoral Prize was awarded to Sho Takatori for his doctoral thesis, "Forces, Stresses and the (Thermo?) Dynamics of Active Matter: The Swim Pressure." The Clauser Prize is awarded to a student whose PhD thesis, completed within the previous 12 months, reflects "extraordinary standards of quality, innovative research, ingenuity, and especially the potential of opening new avenues of human thought and endeavor." After graduation, Takatori will work as a Miller Research Fellow at UC Berkeley. From there, he will join the chemical engineering faculty at UC Santa Barbara.