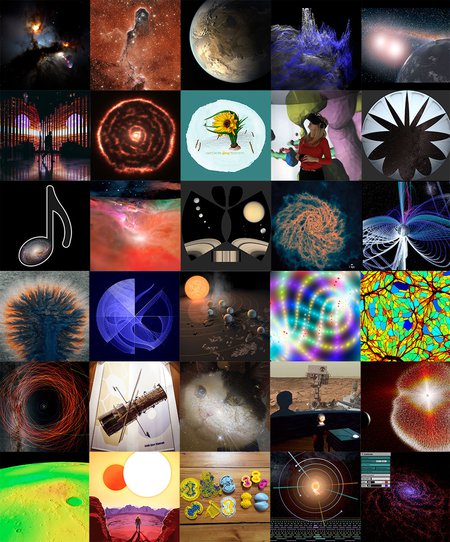 Participants in the AstroViz 2018 workshop came from planetariums and other institutions around the world. This mosaic shows some of their astronomical visualizations. Credit: AstroViz 2018/Caltech/IPAC
Tags:
astronomy & physics

Space can be a colorful place. Pictures from NASA's Hubble and Spitzer space telescopes capture sparkling nebulas and their glowing wisps of gas and dust not only in colors we see with our eyes but in invisible "colors," such as infrared light. And when cosmic objects are too faint or far to be seen, space artists come up with vibrant depictions imagining plausible, other-worldly scenes.

From June 13–15, the creators of those images—and other educational and outreach experts—met at Caltech's science and data center for astronomy, known as IPAC, to exchange tools and techniques and form new collaborations. Called AstroViz 2018, the conference was put together by the communications and education team at IPAC—the same team behind many of NASA's artist concepts, such as those depicting the seven planets of the TRAPPIST-1 system revealed by the Spitzer Space Telescope.

"The idea was to re-establish a community of practice for astro visualization professionals," says Janice Lee, an astronomer at IPAC and an organizer of the event, which was facilitated by NASA's Universe of Learning education program. "The workshop also provided an opportunity to step back from our deadline-packed daily lives and discuss common goals and challenges in anticipation of the new era of data and discovery with the next generation of telescopes."

In addition to attending talks, workshops, and demos—including the latest space-based virtual reality (VR) experiences—conference participants will produce a "white paper" over the next few months outlining future goals and strategies for facilitating collaborations between astronomical visualization teams.

Meeting attendees came from around the world and included representatives from NASA centers across the U.S., the American Museum of Natural History in New York City, the Morrison Planetarium in San Francisco, the European Southern Observatory (ESO)—which just built a new planetarium in Munich, Germany—and many other institutions.

The keynote speaker on the first day of the conference was Rick Sternbach, an astronomical visualization expert who has served as a production designer for the Star Trek franchise and worked on Carl Sagan's original 1980 television series Cosmos. Sternbach showed historical space artwork dating back to before there were any space missions to beam back pictures, and then talked about his own experiences working on Cosmos in the late 1970s. He and his team would build physical models of the planets—for example, their Saturn had Plexiglass rings—and then would take pictures of the models for the show. But around that same time, NASA's Voyager mission started sending back stunning pictures of the planets, changing everything they thought they knew.

"Our special effects were being obsoleted every week," said Sternbach. He explained that he and his colleagues would take in whatever scientific information they had at the time and ask, "Is this plausible, and does it look cool?"

Robert Hurt, a visualization scientist at IPAC, says this is a common theme in their field. "You do the best you can given the current data, and then yes, sometimes you have to go back and change the artwork when more data are captured." Hurt created artwork along with multimedia producer Tim Pyle for the Spitzer TRAPPIST finding—the first known star system to host seven Earth-size planets. Hurt and Pyle ended up redoing all of their TRAPPIST artwork after Spitzer and other telescopes had gathered more precise data on their compositions.

Other speakers at the conference talked about how hard it is to find a job title that appropriately sums up their duties. Frank Summers, an astronomer who does visualization work for NASA's Hubble Space Telescope, says he invented a new job title that represents the merger of his astrophysics and visualization skills—"astrovizicist." Another speaker said he refers to himself as a "pixel farmer."

Travis Rector, an astrophotographer and astronomer at the University of Alaska Anchorage, said that the public often questions the veracity of colorful, star-studded space images. "The public is with us… but there are a lot of questions about how we do things," he said. When Rector brought up the term "false color"—most often used to describe astronomical images in which invisible wavelengths have been assigned visible colors—he got hisses from the audience. As Hurt later explained, the creators of space images prefer the term "translated color," because the colors are not randomly assigned but have scientific meaning.

Another topic for discussion: the need to teach the public not only what astronomers know but how they know it. Lee said it can often be more challenging to explain the process leading to an exciting finding than to just show the result, but these explanations are an essential part of sharing science with the public. "It's important, particularly in this day and age, to enable the public to understand and appreciate this process of critical thinking," she says.

A highlight of the conference was the demo session. Experts from planetariums and elsewhere showed off their latest digital space adventures, from trekking across the asteroid Vesta to flying through the TRAPPIST-1 planetary system to stargazing from Stonehenge. Some of the demos involved VR goggles and others could be experienced on websites.

"The level of creativity and inspiration displayed at this conference was truly awesome," says Hurt. "From swapping ideas and techniques to showing off innovative ways that data can be heard or touched, we all have a lot of new tools in our arsenal for communicating the wonders of the universe."

All the conference sessions are online here.