Four decades after the launches of the Voyager probes, Caltech hosted a panel discussion on the record's making and impact 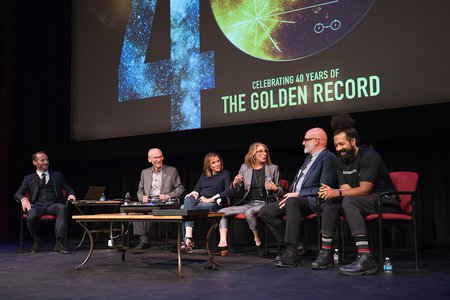 Forty years ago, when the twin Voyager spacecraft were launched from Earth and sent into the far reaches of the universe, each carried an identical golden record. And each record carried a message.

Voyager 1, currently racing from Earth at 38,000 miles per hour, is now 13 billion miles away and has passed the boundary into interstellar space, making it the manmade object farthest from our planet. Voyager 2, which is traveling a little slower, is 11 billion miles away. Each is the ultimate needle in a haystack, a tiny lump of metal in the boundless reaches of space. However, if intelligent life does indeed exist beyond Earth and if that life ever finds one of the Voyager spacecraft, the golden records will offer a greeting from the people of Earth: songs, sounds, and words from humanity, along with 115 images of life on this planet.

Caltech hosted a panel discussion on the history and cultural impact of the Voyager Golden Records on September 28. Panelists included Ed Stone, Voyager project scientist for JPL and Caltech's David Morrisroe Professor of Physics; Ann Druyan, creative director of the Voyager Interstellar Message; Lynda Obst, author and producer of movies such as Interstellar and Contact; David Pescovitz, the co-producer of the first vinyl release of the Golden Record; and Reggie Watts, a musician, comedian, and technologist. The panel was moderated by KCRW Music Director Jason Bentley.

The contents of the record were originally assembled by a committee chaired by Carl Sagan, then an astronomer at Cornell University. "Everyone involved in this project immediately felt that this was a sacred undertaking; that we were creating a kind of Noah's Ark of human culture," said Druyan. "To have touched something like that when you're 26 years old is to be given a gift for the rest of your life, to feel how mythic and romantic life can be."

Druyan, who married Sagan in 1981, made an hour-long recording of her brainwaves while she considered a variety of topics, including what it felt like to fall in love; that recording was included on the Golden Records. "For me it's a tremendous comfort to know that how I felt at that moment, which was affirmed with every beat of my heart since then, is going to last and possibly exist a billion years from now. That's really... I'll never wrap my head around it," she said.

For practical reasons, the cover of the record includes an illustration intended to show whoever finds it how to build a device to play back the recordings, along with a map to Earth using pulsars as landmarks.

"Any intelligent being would know where those are, and would know how to find the earth," said Stone, earning a laugh from an audience primarily filled with people who knew they could not locate their home planet with only a map of pulsars to aid them.

Druyan and her colleagues paid pennies for the so-called "galactic" publishing rights to include popular works like Chuck Berry's "Johnny B. Goode" on the record. When Pescovitz and his friend Tim Daily decided to try to publish the record for the masses, they found that re-gathering publication rights for the audience on Earth was a challenge.

To aid their efforts, they launched a Kickstarter that generated $1.3 million, making it the most successful musical Kickstarter campaign to date. The vinyl edition of the Golden Record was published earlier this year.

When it was created in 1977, the original record was criticized by some for presenting an unrealistic, utopian vision of life on Earth. And while the team grappled with whether humanity should present an account of its own crimes—genocide, war, and violence—Sagan ultimately said that the technology of Voyager would speak for itself, telling any discoverers that humanity was a race in its technological adolescence.

Pescovitz praised that decision. "It gives us something to aspire to," he said. "This may not be the story of Earth, but it's a story, and it's a beautiful story... I feel good that someday, billions of years from now, long after we're burned to a crisp, some intelligence may look at it and think, 'Wow, this was life on this planet.'"