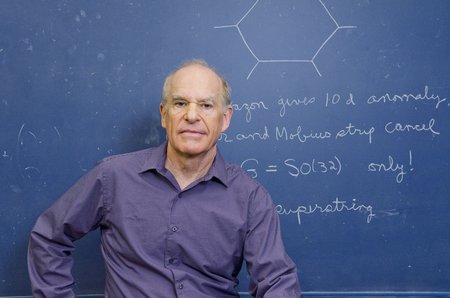 John H. Schwarz, the Harold Brown Professor of Theoretical Physics at Caltech, and Michael B. Green of the University of Cambridge have been awarded the 2014 Fundamental Physics Prize in recognition of the new perspectives they have brought to quantum gravity and the unification of the fundamental physical forces of the universe. The prize comes with a $3 million award.

The prize was announced at an award ceremony at NASA's Ames Research Center in Silicon Valley on December 12. Alexander Varshavsky, Caltech's Howard and Gwen Laurie Smits Professor of Cell Biology received the 2014 Breakthrough Prize in Life Sciences at the same ceremony. Schwarz and Green were awarded the Physics Frontiers Prize earlier this year, which admitted them to candidacy for the Fundamental Physics Prize. The 2014 Physics Frontiers Prize was also awarded to Joseph Polchinski of the University of California, Santa Barbara, a Caltech alumnus (BS, 1975).

The Fundamental Physics Prize is awarded by the Fundamental Physics Prize Foundation, which was established in July 2012 by Russian physicist and Internet entrepreneur Yuri Milner to recognize groundbreaking work in the field. Previous winners include Caltech's Alexei Kitaev, the Ronald and Maxine Linde Professor of Theoretical Physics and Mathematics. He and the other recipients of the award—including theoretical physicist Stephen Hawking—served on the selection committee for this year's prize.

Schwarz and Green were honored for developing superstring theory during their collaboration between 1979 and 1986. Its predecessor, string theory, originated in the late 1960s in response to the discovery of many new particles via accelerator experiments. Theoretical physicists, says Schwarz, tried "to make order out of all this chaos" by postulating that the fundamental object of the universe is the string and that the various particles in the universe could be adequately described as different oscillation modes of the string. It was thought for a time that string theory would yield an explanation of the strong nuclear force that binds protons and neutrons together in an atom's nucleus (or even more fundamentally, the quarks and gluons that make up protons and neutrons). But then in the mid-1970s, quantum chromodynamics provided an excellent account of the strong nuclear force, and string theory fell out of favor among most theoretical physicists.

In 1974, Schwarz and his then collaborator, Joel Scherk, suggested a different possible use of string theory: a quantum theory of gravity and the unification of all the forces in nature. To follow up on this suggestion, Schwarz began his collaboration with Green in 1979, and together they created superstring theory, a version of string theory that relies on the property of supersymmetry to relate the two fundamental types of particles in quantum theory—bosons and fermions—to one another.

This optimism regarding the ultimate success of superstring theory has not always been shared throughout the scientific community. When Schwarz and Green began their work together in 1979, it was, says Schwarz, "not particularly fashionable or popular." But in 1984, the pair's discovery of the so-called Green-Schwarz anomaly cancellation mechanism brought new excitement to superstring theory. "It has remained popular ever since—30 years later," Schwarz remarks.

Schwarz notes that he is especially honored to receive the Fundamental Physics Prize because "the people who were making the selection were other theoretical physicists who've already won the prize, and they are people that I respect and admire. Being chosen by them is particularly meaningful." Schwarz and Green are now eligible to serve on the selection committee for future Fundamental Physics Prizes.