Let There Be Light: Finding the Earliest Galaxies 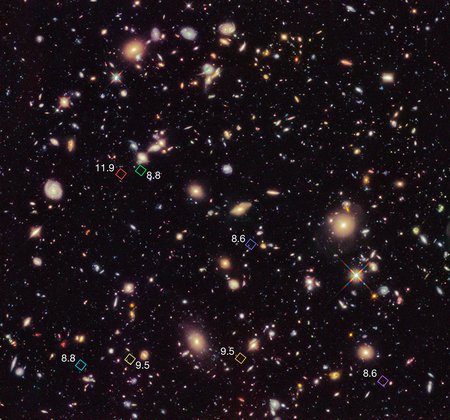 Richard S. Ellis, the Steele Family Professor of Astronomy, is on the verge of seeing as far back as it is possible to see—not quite back to the dawn of time itself but to the dawn of the first galaxies. He describes the journey at 8 p.m. on Wednesday, October 16, in Caltech's Beckman Auditorium. Admission is free.

A: I study distant galaxies. When we look deep into space with the Hubble Space Telescope and at the W. M. Keck Observatory, we're looking back in time. I'm trying to look back to the moment the very first stars switched on—to the "cosmic dawn." Before then, there was no starlight, and we call that period the Dark Ages.

The universe today is 13.8 billion years old, and we can now look about 97 percent of the way back to the Big Bang. We think we need to look maybe another half-percent farther back, or about another 100 million years, in order to find the very earliest objects. We will do this with a large telescope called the Thirty Meter Telescope, which should begin construction in April, and the James Webb Space Telescope, which, I hope, will be launched in 2018.

The very first stars would only contain hydrogen and helium, and we will be able to recognize them by their colors and spectra. Our models tell us that such objects, free from heavy elements such as magnesium and iron, should be extraordinarily blue.

You might ask, "Why is this important?" And the answer is that, in many ways, we're searching for our origins. Stars produced the elements that make up you and me and everything else around us. We are, in a sense, stardust. The discovery of the microwave background radiation from the Big Bang was a big milestone in cosmic history. The moment when the universe switched on its starlight—cosmic dawn—is another important milestone.

Q: What is the best thing about what you do?

A: Above all, I like observing with large telescopes; it's inspirational to search for objects that are extraordinarily distant. And I like working with graduate students; it's remarkable that Caltech students can accompany me to the telescope and share in the discoveries.

Q: How did you get into this line of work?

A: I became convinced I wanted to be an astronomer when I was six years old. I grew up in Wales, and our public library had a little book called Out Into Space by the late Sir Patrick Moore, the famous popularizer of astronomy. It was about a boy and girl who went to their eccentric uncle's house, and he had a telescope. That hooked me. I never wanted to do anything else. Forty years later, I appeared on his television program, The Sky at Night, and he gave me a signed copy. And when I reread it, I still remembered the relevant chapters.

Q: So, do you now qualify as an eccentric uncle yourself?

A: I do, yeah [laughter]. I am an uncle, and I definitely am eccentric. You can ask my sister's kids [more laughter].