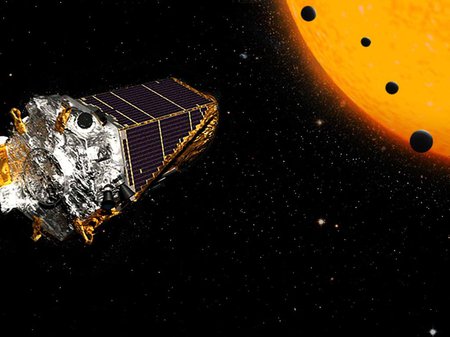 This artist's concept shows NASA's Kepler Space Telescope on its K2 mission. In July 2016, an international team of astronomers announced they had discovered more than 100 new planets using this telescope. The batch includes four planets in the size range of Earth that are orbiting a single dwarf star, depicted in this illustration. Credit: NASA/JPL-Caltech
Tags:
astronomy & physics

An international team of astronomers has discovered and confirmed a treasure trove of new worlds using NASA's Kepler spacecraft on its K2 mission. Out of 197 initial planet candidates, scientists have confirmed 104 planets outside our solar system. Among the confirmed is a planetary system comprising four promising planets that could be rocky.

These four planets, all between 20 and 50 percent larger than Earth by diameter, are orbiting the M dwarf star K2-72, found 181 light-years away in the direction of the Aquarius constellation. The host star is less than half the size of the sun and less bright. The planets' orbital periods range from five-and-a-half to 24 days, and two of them may experience irradiation levels from their star comparable to those on Earth. Despite their tight orbits—closer than Mercury's orbit around our sun—the possibility that life could arise on a planet around such a star cannot be ruled out, according to lead author Ian Crossfield of the University of Arizona's Lunar and Planetary Laboratory in Tucson. Crossfield is a NASA Sagan Fellow, a program administered by the NASA Exoplanet Science Institute at Caltech.