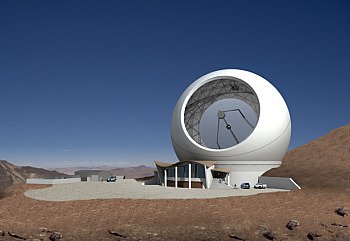 PASADENA, Calif.—In an announcement August 13 at the National Academies in Washington, D.C., the National Research Council (NRC) recommended three space- and ground-based astronomy and astrophysics projects with potential major roles for researchers at the California Institute of Technology (Caltech): CCAT, a submillimeter telescope to be erected in the Chilean Andes, which will help unravel the cosmic origins of stars, planets, and galaxies; the Laser Interferometer Space Antenna (LISA), designed to detect gravitational waves, ripples in the fabric of space and time formed by the most violent events in the universe; and the development of a Giant Segmented Mirrored Telescope (GSMT)—the Thirty Meter Telescope (TMT) being one of two such telescopes under development—which will yield the clearest and deepest view of the universe.

The recommendations were the result of the Astro2010 a decadal survey, in which a panel of experts was convened by the NRC to look at the coming decade and prioritize research activities in astronomy and astrophysics, as well as activities at the interface of these disciplines with physics.

"It is particularly gratifying to see that Caltech faculty are prepared to play leading roles in three of the major projects identified by the Astro2010 study," says Tom Soifer, professor of physics, director of the Spitzer Science Center, and chair of the Division of Physics, Mathematics and Astronomy at Caltech. "Many of the important discoveries in the coming decades will be based on CCAT, TMT, and LISA, and our deep involvement in these projects will ensure that Caltech remains a vibrant, exciting center for astrophysics."

CCAT was recommended for an immediate start. CCAT is a collaboration between Caltech and the Jet Propulsion Laboratory (JPL), managed by Caltech for NASA; Cornell University; the University of Colorado; and consortia in both Germany and Canada. It will be a 25-meter telescope located on a mountain site in Chile at an elevation of 18,500 feet above sea level. Taking advantage of recent advances in detector technology, CCAT will employ cameras and spectrometers to survey the sky at millimeter and submillimeter wavelengths, providing an unprecedented combination of sensitivity and resolution across a wide field of view. CCAT will reveal young galaxies, stars, and solar systems enshrouded in clouds of dust that make these objects very faint or invisible at other wavelengths.

"We are making rapid progress on all fronts—in detectors, instruments, and new facilities—and this is leading to important scientific discoveries," says Jonas Zmuidzinas, Merle Kingsley Professor of Physics at Caltech, director of the Microdevices Laboratory at JPL, and a CCAT project scientist. "With CCAT, we will gain real insight into the evolution of stars and galaxies."

According to Riccardo Giovanelli, CCAT director and professor of astronomy at Cornell University, "CCAT will allow us to explore the process of formation of galaxies, which saw its heyday about a billion years after the Big Bang, some 13 billion years ago; to peek into the interior of the dusty molecular clouds within which stars and planets form; and to survey the pristine chunks of material left intact for billions of years on the outskirts of our solar system."

CCAT is a natural complement to the international Atacama Large Millimeter Array (ALMA) project now under construction in Chile, which will provide detailed, high-resolution images of individual objects over narrow fields of view. This complementarity provides a strong impetus to begin construction of CCAT as soon as possible. Indeed, as Nobel Laureate and CCAT Design Review Committee Chair Robert W. Wilson noted, "CCAT is very timely and cannot wait."

This sentiment was echoed in the Decadal Review Committee's report, which stated that "CCAT is called out to progress promptly to the next step in its development because of its strong science case, its importance to ALMA, and its readiness." The Committee recommended federal support for 33 percent of the construction cost for CCAT, as well as support in the operations phase.

The decadal survey recommended LISA as one of NASA's next major space missions, to start in 2016 in collaboration with the European Space Agency (ESA). In the U.S. the LISA project is managed by the NASA Goddard Space Flight Center and includes significant participation by JPL, which is managed by Caltech for NASA.

LISA is designed to be complementary to the ground-based observatories (such as the Laser Interferometer Gravitational Wave Observatory, or LIGO) that currently are actively searching for signs of gravitational waves, which carry with them information about their origins and about the nature of gravity that cannot be obtained using conventional astronomical tools.

The LISA instrument will consist of three spacecraft in a triangular configuration with 5-million-kilometer arms moving in an Earth-like orbit around the sun. Gravitational waves from sources throughout the universe will produce slight oscillations in the arm lengths (changes as small as about 10 picometers, or 10 million millionths of a meter). LISA will capture these motions using laser links to monitor the displacements of gold–platinum test masses floating inside the spacecraft. It is slated for launch in the early 2020s. The instrument will observe gravitational waves in a lower frequency band (0.1 milliHertz to 1 Hertz) than that detectable by LIGO and other ground-based instruments and will sense ripples coming simultaneously from tens of thousands of sources in every direction.

The survey recommended LISA because of the expectation that observations of gravitational waves in space will answer key scientific questions about the astrophysics of the cosmic dawn and the physics of the universe.

"We are very pleased with the NRC's recognition of LISA's revolutionary research opportunities in astrophysics and fundamental physics and we are looking forward to unveiling a new window on the universe by observing thousands of gravitational wave sources," says Tom Prince, professor of physics at Caltech, senior research scientist at the Jet Propulsion Laboratory (JPL), and the U.S. chair of the LISA International Science Team.

The decadal survey rated the development of a Giant Segmented Mirrored Telescope as a high priority. The TMT is one of two such telescopes under development by consortia with major involvement by private and public entities in the U.S., including Caltech.

Building on the success of the twin Keck telescopes, the core technology of TMT will be a 30-meter segmented primary mirror. This will give TMT nine times the collecting area of today's largest optical telescopes and three-times-sharper images. The TMT has begun full-scale polishing of the 1.4-meter mirror blanks that will make up the primary mirror. TMT also has developed many of the essential prototype components for the telescope, including key adaptive optics technologies and the support and control elements for the 492 mirror segments.