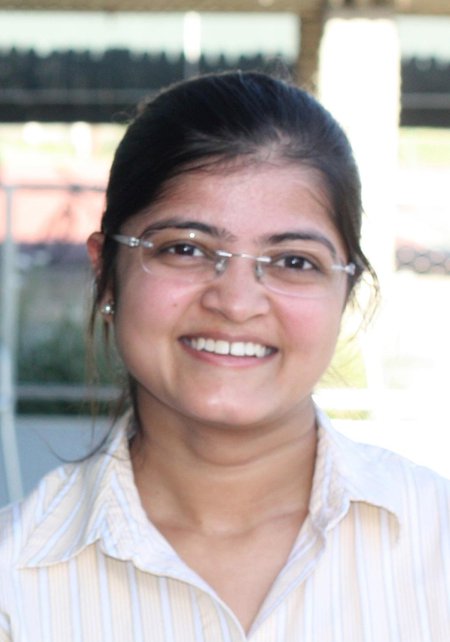 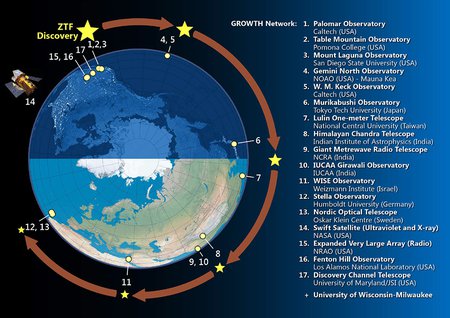 GROWTH is a coordinated northern network of astronomers and telescopes unbeaten by sunrise. As the transient fades and the earth rotates, the baton to collect data is relayed from country-to-country (orange arrows). Credit: Image courtesy Mansi Kasliwal/Caltech
Tags:
astronomy & physics

An international project led by Caltech astrophysicist Mansi M. Kasliwal has been selected to receive $4.5 million over five years by the National Science Foundation through its Partnership for International Research and Education (PIRE) program. The project aims to improve our understanding of cosmic transients—extremely bright flashes of light that suddenly appear in the night sky, shining like new stars, a million to a billion times brighter than the sun, and then quickly fade away.

The project, dubbed Global Relay of Observatories Watching Transients Happen (GROWTH), is a collaboration among six universities in the United States and six abroad. It formally establishes a network of telescopes at longitudes throughout North America, Asia, and Europe (see illustration at right) to extend the hours of night-time observing, enabling researchers to continue monitoring cosmic transients that might otherwise disappear before the next night in a single location.

"There are many questions in astrophysics that depend on these hour timescales, where all the action happens in that first night," says Kasliwal, a new assistant professor of astronomy at Caltech. "So we aim to stay unbeaten by sunrise."

This is the fifth round of PIRE funding since the program started in 2005 with the goal of supporting innovative, high-quality projects in which advances in research and education could not occur without international collaboration.

"In astronomy, where international collaboration is the norm, the PIRE award provides the resources for students and postdocs to interact closely with international partners through extended visits and internships. Such experiences will be invaluable in their future scientific careers," says Tom Prince, an investigator on the GROWTH project, professor of physics and director of the W.M. Keck Institute for Space Studies at Caltech, and senior research scientist at JPL.

Many GROWTH observations will begin with a transient candidate discovered in the data stream generated every night by the Palomar Transient Factory (PTF), a fully automated, wide-field survey systematically searching for such flashes using a camera mounted on the 48-inch Samuel Oschin Telescope at Palomar Observatory.

"GROWTH is extremely timely. By 2017, we will have commissioned the Zwicky Transient Facility, or ZTF, at Palomar, which will be an order of magnitude more sensitive than PTF. GROWTH follow-up of these transients should result in spectacular science," says Shri Kulkarni, an investigator on the GROWTH project, principal investigator on PTF and ZTF, the John D. and Catherine T. MacArthur Professor of Astronomy and Planetary Science, and director of the Caltech Optical Observatories.

If a transient candidate looks promising, Kasliwal might trigger larger optical telescopes like the Gemini North telescope or the W. M. Keck Observatory, both in Hawaii, gaining three additional hours of darkness. After collecting data there, the team might contact members of the network in Japan or Taiwan, then India, Israel, Sweden, and Germany. "We just go around the globe and keep passing the baton so that the sky remains dark," says Kasliwal.

While supernovae—explosions related to the collapse of massive stars—typically fade over months, some cosmic transients, especially rarer events such as the merger of two extremely dense stellar remnants called neutron stars, or the merger of a neutron star and a black hole, are believed to disappear in a matter of hours—a day at most. Some of these more exotic transients are thought to be the source of heavy elements, such as gold and platinum. But no one has seen, in action, the process that creates them. "None of the explosions that we've found so far has been extreme enough to actually synthesize enough heavy elements," says Kasliwal. "As you try to find these rarer and rarer events, you need to be able to respond quickly because the flash of light they produce is even more short-lived, and that's where GROWTH becomes necessary."

Even being able to observe supernovae within a few hours of the blast yields important information that is lost if observations are completed later. That is because after the initial burst flash-ionizes everything, a shock wave follows, sweeping up all the surrounding material. And with that material goes a lot of data about the progenitor, the star that exploded.

"If you respond quickly enough to a young supernova, you can get direct clues about the progenitor system," explains Kasliwal. "With our network, the most common events that we will follow up are very young supernovae that are within a few hours of explosion. For the first time, we're seeing certain ionization lines, which tell us what sort of star it was that just died and gave rise to this particular supernova."

Beyond rapid response, the GROWTH network is also able to use ground- and space-based telescopes to observe cosmic transients at X-ray, ultraviolet, infrared, optical, and radio wavelengths. "Within minutes to hours, we will be able to get a panchromatic picture," says Kasliwal.

That will be key for the network's coordination with Advanced LIGO (aLIGO). That project, led by Caltech and MIT, is searching for gravitational waves—ripples in the fabric of space and time that are predicted to accompany violent events in the universe such as the merger of a neutron star with a black hole. PTF will receive notifications of events that aLIGO identifies as possible sources of gravitational waves. But aLIGO can only narrow the source down to a swath of the sky that is hundreds of square degrees (the full moon on the sky covers about half a degree). PTF will image that swath of sky and pinpoint new transients within it, most likely identifying tens of thousands of events. Then, using new software, the researchers will be able to narrow those down to just a few promising candidates, which will then be fully investigated by the GROWTH network.

"Then we will have data to actually inform us that this one is just a blip, this one is a supernova that has nothing to do with an Advanced LIGO event, and this one is the real counterpart," says Kasliwal. "You need the full picture to be able to get to the heart of the physics."

In addition to its work with transients, the GROWTH network will also help detect and characterize small near-Earth asteroids—those with a diameter smaller than about 140 meters, which can still do significant damage.

"I am very excited about GROWTH's capability for following up detections of small near-Earth asteroids," says Prince. "Determination of the orbits of such objects is critical, and the GROWTH network of telescopes will allow us to make such determinations much more effectively."

Additional participants in the consortium include Lin Yan, a staff scientist at Caltech; Bryan Penprase of Pomona College; Robert Quimby of San Diego State University; Przemek Wozniak of Los Alamos National Laboratory; Stuart Vogel of University of Maryland College Park; David Kaplan of University of Wisconsin–Milwaukee; Nobuyuki Kawai of the Tokyo Institute of Technology; Chow-Choong Ngeow of National Central University in Taiwan; G. C. Anupama of Indian Institute of Astrophysics in Bengalore, India; Varun Bhalerao of The Inter-University Centre for Astronomy and Astrophysics in Pune, India; Eran Ofek of Weizmann Institute of Science in Israel; Ariel Goobar of Stockholm University in Sweden; and Marek Kowalski of Humboldt University in Germany.