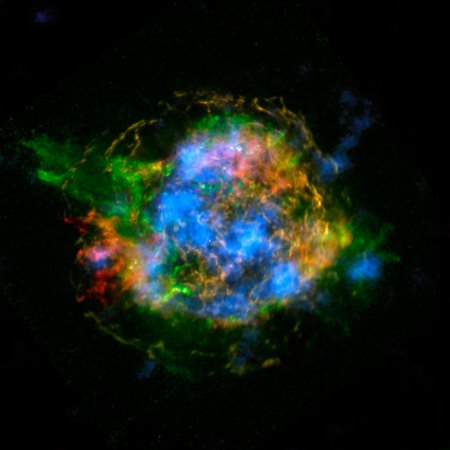 This map of the Cassiopeia A remnant shows radioactive material mapped in high-energy X-rays (shown in blue) by NuSTAR as well as heated, non-radioactive elements (shown in red, yellow, and green) previously imaged by NASA's Chandra X-ray Observatory. Credit: NASA/JPL-Caltech/CXC/SAO 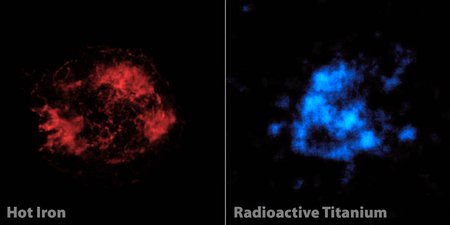 The pattern of radioactive titanium observed by NuSTAR (right) does not match the pattern of heated iron seen by NASA's Chandra X-ray Observatory (left). The two elements were forged together in the supernova explosion, so researchers had expected their distributions to match. Credit: NASA/JPL-Caltech/CXC/SAO
Tags:
astronomy & physics

Using its X-ray vision to observe what is left of a massive star that exploded long ago, NASA's Nuclear Spectroscopic Telescope Array (NuSTAR) spacecraft has shed new light on an old question: How exactly do stars go out with such a bang? For the first time, NuSTAR has mapped radioactive material from the core of such a supernova explosion. The results suggest that the core of the star actually sloshes around before shock waves rip it apart.

Between August 2012 and June 2013, NuSTAR trained its eyes multiple times on the Cassiopeia A (Cas A) remnant—the leftovers of a star that collapsed and exploded more than 11,000 years ago. With the observatory's sensitivity to high-energy X-rays, it was able to image and then map the distribution in Cas A of radioactive titanium-44, an atom produced at the core of the exploding star. Members of the NuSTAR team report the observations in the February 20 issue of the journal Nature.

"We are excited about these new results. Probing supernova explosions is one of the things that NuSTAR was specifically designed to do," says Fiona Harrison, the Benjamin M. Rosen Professor of Physics and Astronomy at Caltech and NuSTAR's principal investigator. "NuSTAR is the only spacecraft currently capable of making the measurements that led to these new insights."

Although other powerful X-ray telescopes, such as NASA's Chandra X-ray Observatory and the European Space Agency's XMM-Newton, have imaged the Cas A remnant before, those observatories can only detect material that has been heated by the explosion. NuSTAR's specially coated optics and newly developed detectors allow it to image at higher energies. So what is particularly exciting about the NuSTAR map is that it shows all of the titanium-44, revealing both the heated and unheated material from the heart of the explosion.

"With NuSTAR we have a new forensic tool to investigate the explosion," says Brian Grefenstette, lead author of the paper, also from Caltech. "Previously, it was hard to interpret what was going on in Cas A because the material that we could see only glows in X-rays when it's heated up. Now that we can see the radioactive material, which glows in X-rays no matter what, we are getting a more complete picture of the core of the explosion."

The distribution of titanium-44 that NuSTAR observed suggests that supernova explosions of Cas A's kind are not completely symmetric, nor are they driven by powerful jets, as some had hypothesized. Instead, computer simulations that match the NuSTAR data suggest that stars like Cas A slosh around before exploding and therefore disperse the radioactive material at their cores in a mildly asymmetric way.

"When we try to recreate supernovas with spherical models, the shock wave from the initial collapse of the star's core stalls out," explains Harrison. "Our new results point to strong distortions of a spherical shape as key to the process of reenergizing the blast wave. The exploding star literally sloshes around before detonating."

As revealing as the NuSTAR findings are, they have also created a new mystery for scientists to ponder. Since both the iron and titanium in the remnant originated in the star's core, the researchers had expected to find significant overlap between the titanium-44 map and a previous map based on Chandra's observations of iron in the remnant. Instead, the two did not match up well. So, the researchers say, the case of the Cas A remnant is far from closed.