Voyager: Getting to Know the Magnetic Highway 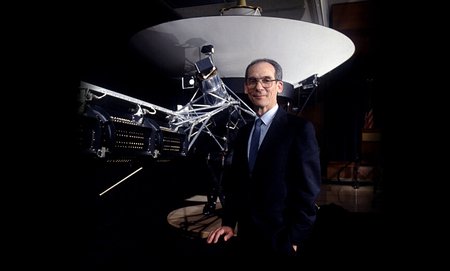 Caltech's Ed Stone stands before a model of the Voyager spacecraft

Since last August, NASA's farthest-flung robotic envoy, Voyager I, has been exploring a distant region just shy of interstellar space, some 11 billion miles (18 billion kilometers) away. Now, in three new papers in Science Express, Voyager scientists, including Caltech's Ed Stone, are sharing what they have learned about the peculiar region known as the "magnetic highway."

In this unexpected region, energetic particles from inside the heliosphere—the "bubble" containing charged particles streaming away from the sun—have escaped and disappeared along a highway of magnetic field lines. Their disappearance has allowed Voyager to see even low-energy cosmic rays that are zipping into the heliosphere from interstellar space.

Stone, the David Morrisroe Professor of Physics at Caltech and the mission's project scientist since 1972, says that what's really interesting is that, although Voyager is still within the realm of the sun's magnetic field, the spacecraft is already getting a taste of what's outside the bubble.

For more on the findings, read the full NASA release.