My general area of research is observational cosmology, with particular interest in the process of galaxy formation and the nature of the intergalactic medium. Whereas the large-scale structure of the universe is dictated primarily by dark matter, the behavior of the normal, baryonic matter embedded in the dark-matter structure is what shapes the observable universe. These baryonic processes are very complex, and relatively poorly understood. By using spectroscopic observations of objects at high redshifts, we attempt to observe directly the most important cosmic epochs as they are happening. Such observations are used to reconstruct the history of galaxies, and the reservoir of diffuse gas between the galaxies, over a large fraction of the age of the universe.

We are interested in measuring key physical parameters of galaxies such as mass, chemistry, large-scale spatial distribution, and the impact of energetic processes such as black hole accretion, star formation, and supernova explosions on their environments in the young universe. Most of our work is conducted using a combination of the Palomar 200-inch telescope and the twin 10m Keck telescopes in Hawaii, though we also have projects using Hubble, Spitzer, and Chandra space telescopes. 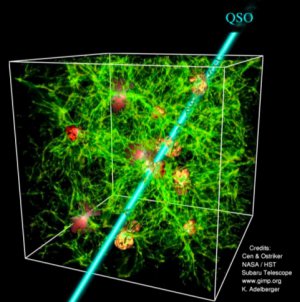 I spend a fair fraction of my time on the development of new observatories (I have been working on the Thirty Meter Telescope project since 1998) and on state-of-the-art instruments for current and future telescopes. For instance, I have spent a significant amount of time overseeing the building (in a high-bay clean room here at Caltech) of MOSFIRE, a new near-IR (0.9-2.5 micron) wide-field multi-object spectrograph and imager for the Keck I telescope.

I enjoy working with graduate students, and in fact I maintain collaborations with all of my former students well after they move on to the next step in their careers. I was a Caltech graduate student myself back in the day (Ph.D. 1989), and returned as faculty in 1995.