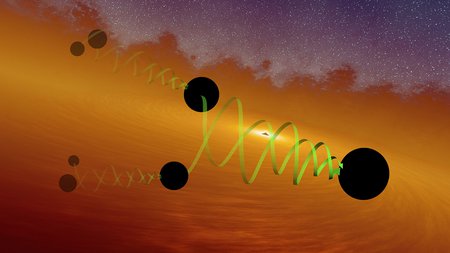 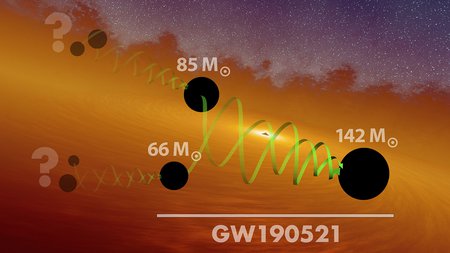 This artist's concept illustrates a hierarchical scheme for merging black holes. LIGO and Virgo recently observed a black hole merger with a final mass of 142 times that of the sun, making it the largest of its kind observed in gravitational waves to date. The event is thought to have occurred when two black holes of about 66 and 85 solar masses spiraled into each other and coalesced. Theoretical models indicate that nature is not likely to form black holes of this heft; in particular models identify a range of masses between 65 and 130 solar masses, called the pair instability mass gap, in which it is thought that black holes cannot be formed by a collapsing star. So how did the two merging black holes observed by LIGO and Virgo originate? Scientists think that these black holes may have themselves formed from the earlier mergers of two smaller black holes, as indicated in the illustration. Credit: LIGO/Caltech/MIT/R. Hurt (IPAC) 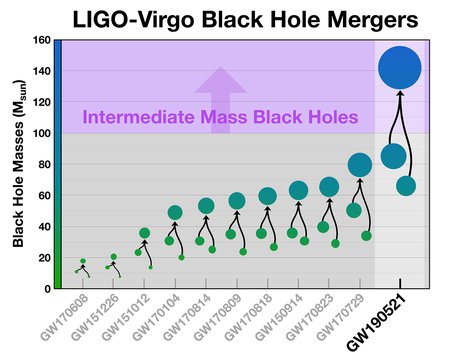 LIGO and Virgo have observed their largest black hole merger to date, an event called GW190521, in which a final black hole of 142 solar masses was produced. This chart compares the event to others witnessed by LIGO and Virgo and indicates that the remnant of the GW190521 merger falls into a category known as an intermediate-mass black hole. This is the first clear detection of a black hole of this type. Intermediate-mass black holes, which have previously been predicted theoretically, would have masses between those of stellar-mass black holes and the supermassive ones at the hearts of galaxies. Credit: LIGO/Caltech/MIT/R. Hurt (IPAC)
Tags:
LIGO, astronomy & physics

For all its vast emptiness, the universe hums with activity in the form of gravitational waves. Produced by extreme astrophysical phenomena, these reverberations ripple forth and shake the fabric of space-time, like the clang of a cosmic bell.

Now researchers have detected a signal from what may be the most massive black hole merger yet to be observed in gravitational waves. The product of the merger represents the first clear detection of an "intermediate-mass" black hole, with a mass between 100 and 1,000 times that of the sun.

The signal, which has been labeled GW190521, was detected on May 21, 2019, with the National Science Foundation's (NSF) Laser Interferometer Gravitational-wave Observatory (LIGO), a pair of identical 4-kilometer-long interferometers in the United States, and Virgo, a 3-kilometer-long detector in Italy.

The signal resembles about four short wiggles and is extremely brief in duration, lasting less than one-tenth of a second. From what the researchers can tell, GW190521 was generated by a source located roughly 5 gigaparsecs away, and thus occurred when the universe was about half its age, making it one of the most distant gravitational-wave sources detected so far.

What produced this signal? Based on a powerful suite of state-of-the-art computational and modeling tools, scientists think that GW190521 was most likely generated by a binary black hole merger with unusual properties.

Almost every confirmed gravitational-wave signal to date has been from the merger of a binary pair of objects—either two black holes or two neutron stars. This newest merger appears to be the most massive yet and involved a pair of black holes with 85 and 66 times the mass of the sun that spiraled toward each other and coalesced.

The LIGO–Virgo team has also measured each black hole's spin and discovered that as the black holes were circling ever closer together, they could have been spinning about their own axes at angles that were out of alignment with the axis of their orbit. The black holes' misaligned spins likely caused their orbits to wobble, or "precess," as the two Goliaths spiraled toward each other.

The new signal likely represents the instant that the two black holes merged. The merger created an even more massive black hole of about 142 solar masses, and released an enormous amount of energy, equivalent to around eight solar masses, that spread across the universe in the form of gravitational waves.

"This doesn't look much like a 'chirp,' which is what we typically detect," says Virgo member Nelson Christensen, a researcher at the French National Centre for Scientific Research (CNRS). Compared to the signal to LIGO's first detection of gravitational waves in 2015, he says, "this is more like something that goes 'bang,' and it's the most massive signal LIGO and Virgo have seen."

The international team of scientists, who make up the LIGO Scientific Collaboration (LSC) and the Virgo Collaboration, has reported their findings in two papers published today. One, appearing in Physical Review Letters, details the discovery, and the other, in The Astrophysical Journal Letters, discusses the signal's physical properties and astrophysical implications.

"LIGO once again surprises us not just with the detection of black holes in sizes that are difficult to explain but doing it using techniques that were not designed specifically for stellar mergers," says Pedro Marronetti, program director for gravitational physics at the NSF. "This is of tremendous importance since it showcases the instrument's ability to detect signals from completely unforeseen astrophysical events. LIGO shows that it can also observe the unexpected."

In the mass gap

The uniquely large masses of the two colliding black holes, as well as the final black hole, have raised a slew of questions about their formation.

All of the black holes observed to date fit within one of two categories: stellar-mass black holes, which measure from a few solar masses up to tens of solar masses and are thought to form when massive stars die, or supermassive black holes, such as the one at the center of the Milky Way galaxy, which range from hundreds of thousands to billions of times the mass of our sun.

However, the final 142-solar-mass black hole produced by the GW190521 merger lies within an intermediate-mass range between stellar-mass and supermassive black holes, and is the first of its kind ever detected.

The two progenitor black holes that produced the final black hole also seem to be unique with respect to their size. They are so massive that scientists suspect one or both of them may not have formed from a collapsing star, as do most stellar-mass black holes.

According to the physics of stellar evolution, outward pressure from the photons and gas in a star's core support it against the force of gravity pushing inward so that the star is stable, like the sun. After the core of a massive star fuses atomic nuclei that are as heavy as iron, it can no longer produce enough pressure to support the star's outer layers. When this outward pressure is less than gravity, the star collapses under its own weight triggering an explosion called a core-collapse supernova, which can leave behind a black hole.

This process can explain how stars as massive as 130 solar masses can produce black holes that are as much as 65 solar masses. But for heavier stars, a phenomenon known as pair instability is thought to kick in. When the core's photons become extremely energetic, they can morph into an electron and antielectron pair. These pairs generate less pressure than photons, causing the star to become unstable against gravitational collapse. The resulting explosion is so powerful that nothing is left behind. Even more massive stars, those above 200 solar masses, would eventually collapse directly into a black hole of at least 120 solar masses. A collapsing star, then, should not be able to produce a black hole between approximately 65 and 120 solar masses, a range that is known as the pair instability mass gap.

But in the current detection, the heavier of the two black holes that produced the GW190521 signal, at 85 solar masses, is the first to be detected that falls within the pair instability mass gap.

"The fact that we're seeing a black hole in this mass gap will make a lot of astrophysicists scratch their heads and try to figure out how these black holes were made," says Christensen, who is the director of the Artemis Laboratory at the Nice Observatory in France.

One possibility, which the researchers consider in their second paper, is a hierarchical merger, in which the two progenitor black holes each first formed from the merger of two even smaller black holes; this pair of newly formed black holes then migrated together and eventually also merged.

"This event opens more questions than it provides answers," says LIGO member Alan Weinstein, professor of physics at Caltech. "From the perspective of discovery physics, it's a very exciting thing."

There are many remaining questions regarding GW190521.

As LIGO and Virgo detectors listen for gravitational waves passing through Earth, automated searches comb through the incoming data for interesting signals. These searches can use two different methods: algorithms that pick out specific wave patterns in the data that may have been produced by compact binary systems and more general "burst" searches, which essentially look for anything out of the ordinary.

LIGO member Salvatore Vitale, assistant professor of physics at MIT, likens compact binary searches to "passing a comb through data, that will catch things in a certain spacing," in contrast to burst searches that are more of a catch-all approach.

In the case of GW190521, a burst search picked up the signal slightly more clearly, opening the very small chance that the gravitational waves arose from something other than a binary merger.

"The bar for asserting we've discovered something new is very high," Weinstein says. "We typically apply Occam's razor: the simpler solution is the better one, which in this case is a binary black hole."

But what if something entirely new produced these gravitational waves? It is a tantalizing prospect, and in their paper, the scientists briefly consider other sources in the universe that might have produced the signal they detected. For instance, the gravitational waves might have been emitted by a collapsing star in our galaxy. The signal could also arise from a cosmic string produced just after the universe inflated in its earliest moments. But neither of these exotic possibilities matches the data as well as a binary merger.

"Since we first turned on LIGO, everything we've observed with confidence has been a collision of black holes or neutron stars," Weinstein says. "This is the one event where our analysis allows the possibility that this event is not such a collision. Although this event is consistent with being from an exceptionally massive binary black hole merger, and alternative explanations are disfavored, it is pushing the boundaries of our confidence. And that potentially makes it extremely exciting, because we have all been hoping for something new, something unexpected, that could challenge what we've learned already. This event has the potential for doing that."

This research was funded by the NSF.

LIGO is funded by the NSF and operated by Caltech and MIT, which conceived of LIGO and lead the project. Financial support for the Advanced LIGO project was led by the NSF with Germany (Max Planck Society), the U.K. (Science and Technology Facilities Council), and Australia (Australian Research Council-OzGrav) making significant commitments and contributions to the project. Approximately 1,300 scientists from around the world participate in the effort through the LIGO Scientific Collaboration, which includes the GEO Collaboration. A list of additional partners is available at https://my.ligo.org/census.php.

The Virgo Collaboration is currently composed of approximately 520 members from 99 institutes in 11 different countries including Belgium, France, Germany, Hungary, Italy, the Netherlands, Poland, and Spain. The European Gravitational Observatory (EGO) hosts the Virgo detector near Pisa in Italy, and is funded by Centre national de la recherche scientifique (CNRS) in France, the Istituto Nazionale di Fisica Nucleare (INFN) in Italy, and Nikhef in the Netherlands. A list of the Virgo Collaboration groups can be found at http://public.virgo-gw.eu/the-virgo-collaboration/. More information is available on the Virgo website at http://www.virgo-gw.eu.