The Art of Exoplanets

JPL Video: The Art of Exoplanets 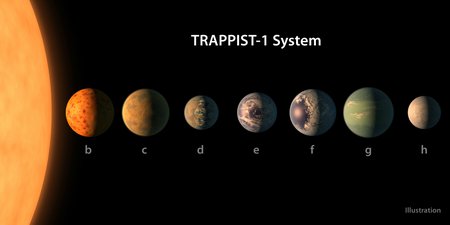 This artist's concept shows what the TRAPPIST-1 planetary system may look like, based on available data about the planets’ diameters, masses and distances from the host star. TRAPPIST-1 is an ultra-cool dwarf star in the constellation Aquarius, and its planets orbit very close to it. They are likely all tidally locked, meaning the same face of the planet is always pointed at the star, creating a perpetual night side and perpetual day side on each planet. Credit: NASA/JPL-Caltech 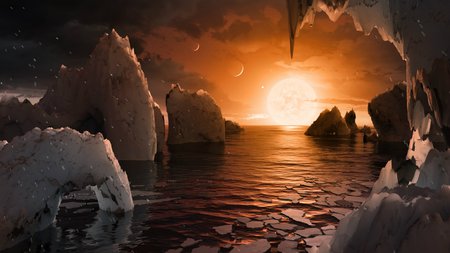 Imagine standing on the surface of the exoplanet TRAPPIST-1f. This artist's concept is one interpretation of what it could look like. Credit: NASA/JPL-Caltech
Tags:
astronomy & physics

Recently, NASA's Spitzer Space Telescope helped reveal that a star called TRAPPIST-1 is circled by seven Earth-size planets—the first system of this kind found to date. The data collected by Spitzer and other telescopes reveal the exoplanets' sizes and distances to their stars, while theoretical models predict additional information about the planets' atmospheres and surfaces. But what do these planets really look like? Do they have continents, lava, or oceans?

Astronomers do not know what exoplanets look like to this level of detail, so they enlist artists like Robert Hurt and Tim Pyle of Caltech's IPAC, a science and data center for astronomy, to help imagine the worlds. Hurt, a visualization scientist and astronomer, and Pyle, a multimedia producer, teamed up to create a suite of images and videos of the TRAPPIST-1 system that are both eye-catching and scientifically plausible. One of the graphics—a lineup of all seven sunlit worlds—adorned the front page of The New York Times on February 23, 2017, the day after the discovery was announced.

In addition to exoplanets, Hurt and Pyle have created artwork of everything from asteroids to brown dwarfs to dead pulsing stars. To learn more about Caltech's space artists, check out a new video and feature story from the Jet Propulsion Laboratory, which is managed by Caltech for NASA.