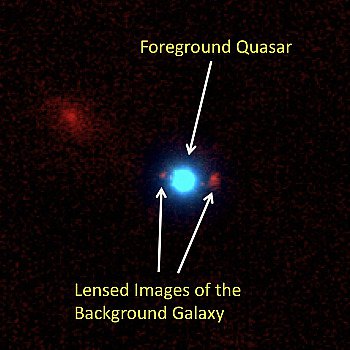 PASADENA, Calif.—Astronomers at the California Institute of Technology (Caltech) and Ecole Polytechnique Fédérale de Lausanne (EPFL) in Switzerland have discovered the first known case of a distant galaxy being magnified by a quasar acting as a gravitational lens. The discovery, based in part on observations done at the W. M. Keck Observatory on Hawaii's Mauna Kea, is being published July 16 in the journal Astronomy & Astrophysics.

Quasars, which are extraordinary luminous objects in the distant universe, are thought to be powered by supermassive black holes in the cores of galaxies. A single quasar could be a thousand times brighter than an entire galaxy of a hundred billion stars, which makes studies of their host galaxies exceedingly difficult. The significance of the discovery, the researchers say, is that it provides a novel way to understand these host galaxies.

"It is a bit like staring into bright car headlights and trying to discern the color of their rims," says Frédéric Courbin of EPFL, the lead author on the paper. Using gravitational lensing, he says, "we now can measure the masses of these quasar host galaxies and overcome this difficulty."

According to Einstein's general theory of relativity, if a large mass (such as a big galaxy or a cluster of galaxies) is placed along the line of sight to a distant galaxy, the part of the light that comes from the galaxy will split. Because of this, an observer on Earth will see two or more close images of the now-magnified background galaxy.

The first such gravitational lens was discovered in 1979, and produced an image of a distant quasar that was magnified and split by a foreground galaxy. Hundreds of cases of gravitationally lensed quasars are now known. But, until the current work, the reverse process—a background galaxy being lensed by the massive host galaxy of a foreground quasar—had never been detected.

"We were delighted to see that this idea actually works," says Georges Meylan, a professor of physics and leader of the EPFL team. "This discovery demonstrates the continued utility of gravitational lensing as an astrophysical tool."

"Quasars are valuable probes of galaxy formation and evolution," says Professor of Astronomy S. George Djorgovski, leader of the Caltech team. Furthermore, he adds, "discoveries of more such systems will help us understand better the relationship between quasars and the galaxies which contain them, and their coevolution."

Other coauthors of the Astronomy & Astrophysics paper, entitled "First case of strong gravitational lensing by a QSO: SDSS J0013+1523 at z = 0.120," are Malte Tewes and François Rerat of EPFL, Ashish Mahabal of Caltech, and Dominique Sluse of the Astronomical Research Institute in Heidelberg, Germany. The work done at Caltech was supported by the National Science Foundation and the Ajax Foundation.

Images are available at http://www.astro.caltech.edu/~george/qsolens/.