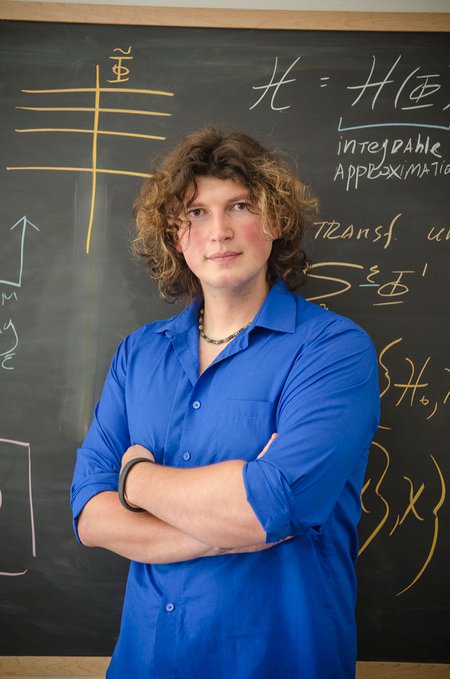 Among the many descriptors assigned to Caltech scientists, "rock star" is not the most common.

But when Konstantin Batygin (MS '10, PhD '12), an assistant professor of planetary science at Caltech, was recently included in Forbes's "30 Under 30" list in the science category, the editors used just those words, describing Batygin as "the next physics rock star." And indeed, in addition to having already published 21 papers as first author, the 28-year-old planetary scientist is a lead singer in a band called The Seventh Season.

The Forbes list, now in its third year, spotlights 30 "game changers, movers, and makers" under 30 years old, in 20 different categories ranging from venture capital to music.

When he is not playing gigs with his band or flying remote-controlled planes—a favorite pastime he picked up during graduate school—Batygin researches the evolution of planetary orbits, from their chaotic beginnings to the eventual end of their parent solar systems. By studying the dynamical structure of our own planetary system, Batygin and his team are developing a theoretical understanding of the origins and long-term evolution of other such systems throughout the galaxy.

Batygin also studies the interiors of exoplanets. Many of the exoplanets that have been discovered reside in close proximity to their host stars and so are bathed in intense stellar radiation. This can cause their atmospheres to become electrically conductive. Batygin studies how the interaction between an exoplanet's magnetic field and its electrically charged atmosphere can induce electrical currents that heat the planet's interior and perturb atmospheric circulation patterns.

"I am deeply humbled by this recognition," says Batygin. "More than anything, this is a tribute to the outstanding mentorship that I have received over the years from my advisers, particularly during my time here at Caltech as a graduate student."

Batygin is not Caltech's first talented young researcher to be recognized on the "30 Under 30" list. Assistant Professor of Biology Mitchell Guttman has appeared on the list twice, in 2013 and 2014; Assistant Research Professor Elaine Hsiao was named to the list in 2013; and two Caltech alumni and a graduate students also made the list in 2012.