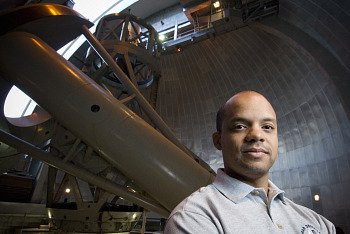 PASADENA, Calif.—Hundreds of extrasolar planets have been found over the past decade and a half, most of them solitary worlds orbiting their parent star in seeming isolation. With further observation, however, one in three of these systems have been found to have two or more planets. Planets, it appears, come in bunches. Most of these systems contain planets that orbit too far from one another to feel each other's gravity. In just a handful of cases, planets have been found near enough to one another to interact gravitationally.

Now, however, John A. Johnson, an assistant professor of astronomy at the California Institute of Technology (Caltech), and his colleagues have found two systems with pairs of gas giant planets locked in an orbital embrace.

Adds Eric Ford of the University of Florida in Gainsville, "A planetary system with such closely spaced giant planets would be destroyed quickly if the planets weren't doing such a well synchronized dance. This makes it a real puzzle how the planets could have found their rhythm."

A paper by Johnson, Ford, and their collaborators describing the planets and their intriguing orbital dynamics has been accepted for publication in the Astronomical Journal (see http://arxiv.org/abs/1007.4552 for a preprint).

All of the four newly discovered exoplanets are gas giants more massive than Jupiter, and like most exoplanets were discovered by measuring the wobble, or Doppler shift, in the light emitted by their parent stars as the planets orbit around them. Surprisingly, however, the members of each pair are located remarkably close to one another.

Planets often move around after they form, in a process known as migration. Migration is thought to be commonplace—it even occurred to some extent within our own solar system—but it isn't orderly. Planets located farther out in the protoplanetary disk can migrate faster than those closer in, "so planets will cross paths and jostle each other around," Johnson says. "The only way they can 'get along' and become stable is if they enter an orbital resonance."

When planets are locked in an orbital resonance, their orbital periods are related by the ratio of two small integers. In a 2:1 resonance, for example, an outer planet will orbit its parent star once for every two orbits of the inner planet; in a 3:2 resonance, the outer planet will orbit two times for every three passes by the inner planet, and so forth. Such resonances are created by the gravitational influence of planets on one another.

"There are many locations in a protoplanetary disk where planets can form," says Johnson. "It's very unlikely, however, that two planets would just happen to form at locations where they have periods in one of these ratios."

A 2:1 resonance—which is the case for the planets orbiting 24 Sextanis—is the most stable and the most common pattern. "Planets tend to get stuck in the 2:1. It's like a really big pothole," Johnson says. "But if a planet is moving very fast"—racing in from the outer part of the protoplanetary disk, where it formed, toward its parent star—"it can pass over a 2:1. As it moves in closer, the next step is a 5:3, then a 3:2, and then a 4:3."

Johnson and his colleagues have found that the pair of planets orbiting HD 200964 is locked in just such a 4:3 resonance. "The closest analogy in our solar system is Titan and Hyperion, two moons of Saturn which also follow orbits synchronized in a 4:3 pattern," says Ford. "But the planets orbiting HD 200964 interact much more strongly, since each is around 20,000 times more massive than Titan and Hyperion combined."

"This is the tightest system that's ever been discovered," Johnson adds, "and we're at a loss to explain why this happened. This is the latest in a long line of strange discoveries about extrasolar planets, and it shows that exoplanets continuously have this ability to surprise us. Each time we think we can explain them, something else comes along."

Johnson and his colleagues found the two systems using data from the Keck Subgiants Planet Survey—a search for planets around stars from 40 to 100 percent larger than our own sun. Subgiants represent a class of stars that have evolved off the "main sequence," and have run out of hydrogen for nuclear fusion, causing their core to collapse and their outer envelope to swell. Subgiants eventually become red giants—voluminous stars with big, puffy atmospheres that pulsate, making it difficult to detect the subtle spectral shifts caused by orbiting planets.

"Subgiants are rotating very slowly and they're cool," unlike rapidly rotating, hot main sequence stars, "but they haven't expanded enough to be too fluffy and too jittery," Johnson says. "They're 'Goldilocks' stars: not too fast, not too hot, not too fluffy, not too jittery"—and, therefore, ideal for planet hunting.

"Right now, we're monitoring 450 of these massive stars, and we are finding swarms of planets," he says. "Around these stars, we are seeing three to four times more planets out to a distance of about 3 AU—the distance of our asteroid belt—than we see around main sequence stars. Stellar mass has a huge influence on frequency of planet occurrence, because the amount of raw material available to build planets scales with the mass of the star."

Eventually, perhaps 10 or 100 million years from now, subgiant stars like HD 200964 and 24 Sextanis will become red giants. They will throw off their outer atmospheres, swelling to the point where they could engulf the inner planet of their dancing pair, and will throw off mass, changing the gravitational dynamics of their whole system. "The planets will then move out, and their orbits will become unstable," Johnson says. "Most likely one of the planets will get flung out of the system completely"-and the dance will end.