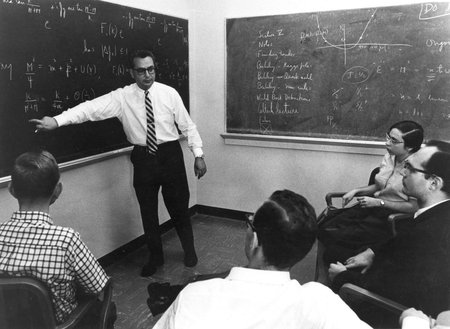 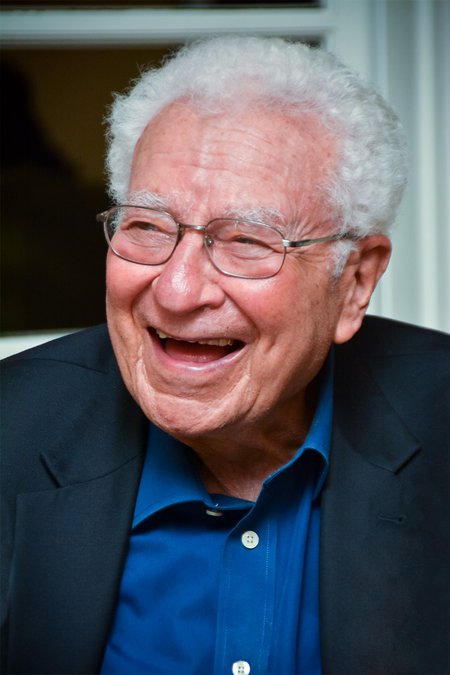 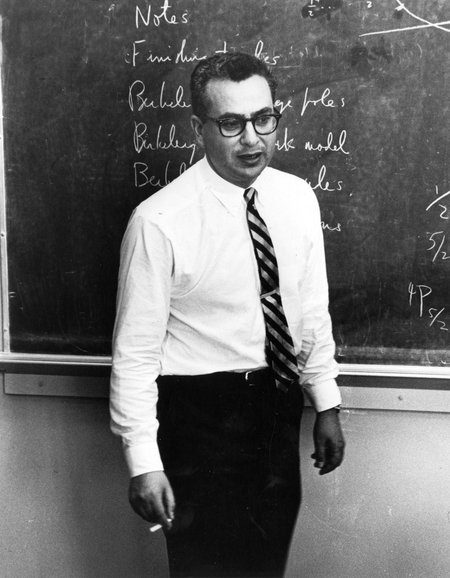 Murray Gell-Mann, Caltech's Robert Andrews Millikan Professor of Theoretical Physics, Emeritus, and a winner of the 1969 Nobel Prize in Physics, passed away on May 24, 2019. He was 89 years old.

Gell-Mann helped bring order to the field of particle physics in the 1950s and 1960s—a time when a bewildering array of new particles was being found in "atom-smashing" experiments. He devised a new method for sorting the particles into simple groups of eight, based on their electric charge, spin, and other characteristics (Israeli scientist Yuval Ne'eman also came up with a similar classification scheme). Gell-Mann termed his method the "eightfold way" after the Buddhist Eightfold Path to enlightenment, and for this research and related work he was awarded the Nobel Prize in Physics.

He is perhaps best known for developing the theory of "quarks," indivisible components of matter that make up protons, neutrons, and various other subatomic particles. He famously named quarks after the exclamation, "Three quarks for Muster Mark!" in James Joyce's novel Finnegans Wake. Quarks are never seen individually, nor can they be dislodged from the larger particles they inhabit. They also possess charges of -1/3 and 2/3, an attribute originally thought to be a physical impossibility. Later experiments confirmed the existence of quarks, and these objects now form the basis for our physical understanding of the universe.

"Murray Gell-Mann was a seminal figure in the history of physics," says Caltech president Thomas Rosenbaum, the Sonja and William Davidow Presidential Chair and professor of physics. "A polymath, a discerner of Nature's fundamental patterns, and, as such, an expositor for the connections of physics to other disciplines, Murray helped define the approaches of generations of scientists."

"Murray was one of the great theoretical physicists of his time, and a fixture in the theory group at Caltech. He left his mark on generations of students and postdocs," says Fiona Harrison, the Benjamin M. Rosen Professor of Physics and the Kent and Joyce Kresa Leadership Chair in Caltech's Division of Physics, Mathematics and Astronomy.

Gell-Mann was born in New York City on September 15, 1929. His father, Arthur, was born in Austria and later moved to Manhattan to find work, securing a variety of jobs; he counseled children at an orphanage, worked on Wall Street, did German correspondence for a toy-importing firm, and opened a language school. In 1919, Arthur married Gell-Mann's mother Pauline, who was also born in Austria. In an oral history for the Caltech Archives, Gell-Mann noted that his mother "always had dreams for me, of doing great things," and that her dreams were realized when he tested into a private grammar school with a full scholarship. He ended up skipping several grades.

Gell-Mann described his broad interests in his oral history: "My principal interests were all in subjects involving individuality, diversity, evolution. History, archeology, linguistics, natural history of various kinds—birds, butterflies, trees, herbaceous flowering plants, and so on—those are the things that I loved. Plus mathematics. Plus all sorts of other things—art, for example, and music," he said.

He received his bachelor of science degree in physics from Yale University in 1948 and a doctorate in physics from MIT in 1951 His father persuaded him to choose physics as his major at Yale. Physics, according to Gell-Mann, was "the only course in which I did badly in high school, and hated it." But his father told him he would love quantum mechanics and relativity. "So I took physics, and after a while I got to like it. And I found that my father was right, in fact—uncharacteristically, he was quite right. Quantum mechanics and relativity were marvelous."

In the 1950s, fundamental physicists had increasingly powerful ways of probing short distances using particle accelerators. In high-energy physics, examining smaller scales offers ever more fundamental elements of the universe. An issue, however, was translating the experimental evidence provided by these particle accelerators into a cohesive understanding.

"Dr. Gell-Mann had this clear vision and penetrating insight to look through the large amounts of data that were coming from experiments and make sense of it," says Caltech's Hirosi Ooguri, Fred Kavli Professor of Theoretical Physics and Mathematics and director of the Walter Burke Institute for Theoretical Physics. "He opened a new paradigm in particle physics."

"Gell-Mann was one of the great theoretical physicists of the second half of the 20th century," says Mark B. Wise, the John A. McCone Professor of High Energy Physics at Caltech. "He is best known for his contribution to the physics of strongly interacting particles, bringing order out of chaos through his discovery of an approximate flavor symmetry that organized the masses of all these particles into almost degenerate multiplets, and for his discovery of quarks as the fundamental constituents of these particles."

The idea of quarks (which was also independently proposed around the same time by a former Caltech professor George Zweig (PhD '64)) was a part of Gell-Mann's body of work to classify the elementary particles and their interactions, for which he received the Nobel Prize. Among other concepts he introduced are "strangeness," which governs how some families of particles decay, and "color charge," which relates to the grip exerted by the strong nuclear force to hold protons and neutrons together within atomic nuclei. Working with others, he later developed a quantum field theory of quarks, called quantum chromodynamics, which accounts for nuclear particles and their strong interactions.

From 1974 to 1984, Gell-Mann championed the work of John Schwarz, who is now Caltech's Harold Brown Professor of Theoretical Physics, Emeritus. At the time, Schwarz was working on an upstart idea known as string theory—which was not very popular with the physics establishment.

"It was a time when the standard model of elementary particles—which Gell-Mann established—was developing rapidly. Everyone was working on that, so superstring theory wasn't popular. But Dr. Gell-Mann saw that this research that Schwarz was doing was very important and supported him for 10 years," says Ooguri. Gell-Mann secured funding to support Schwarz as a research associate at Caltech until his major breakthrough in 1984, when he and Michael Green of Cambridge discovered a way for superstring theory to explain the weak interaction of electrons.

"It's rare to support someone whose research is not very popular. He had to believe in what Schwarz was doing, and he had to trust his judgement in supporting it," Ooguri says. "It made Caltech a very special place in the world of theoretical physics, that he had that kind of foresight."

"Murray Gell-Mann was a great scientist, and he was very important in my career," says Schwarz. "During the 10-year period from 1974 to 1984, when I and a few collaborators were developing superstring theory as a possible framework for a unified quantum theory of all fundamental particles and forces (including gravity), with very little encouragement from the rest of the theoretical physics community, he recognized that this approach might turn out to be correct. Murray was an advocate for preserving endangered species, and he said that I fell in this category."

In later years, Gell-Mann became interested in the issues of complexity at the heart of biology, ecology, sociology, and computer science. He co-founded the Santa Fe Institute in Santa Fe, New Mexico in 1984 to study such complex systems, and authored The Quark and the Jaguar, published in 1994, to present his ideas on simplicity and complexity to a general readership. He married his second wife, Marcia Southwick, in 1992 and retired from Caltech in 1993.

Ooguri recalls Gell-Mann returning to Caltech's campus in 2013 for a symposium marking the 50th anniversary of his quark model. "He was a warm person, and curious about people. He was also extremely generous with his ideas. He was not like the lone genius; he was very open, and generous to other people."

"It would be hard to overestimate the degree to which Murray dominated theoretical particle physics during his heyday in the 1950s and 1960s. He contributed so many deep ideas that drove the field forward, many of which are just as relevant today," says John Preskill, the Richard P. Feynman Professor of Theoretical Physics at Caltech. "Murray was extremely kind and supportive when I was a young Caltech faculty member. He'll be sorely missed. This is a very sad day for Caltech and for the world of physics."

Gell-Mann was a director of the John D. and Catherine T. MacArthur Foundation from 1979 to 2002 and was a board member of the Wildlife Conservation Society from 1994 to 2006. He served as chairman of the board of trustees of the Aspen Center for Physics from 1973 to 1979; was a Citizen Regent of the Smithsonian Institution from 1974 to 1988; and served on the U.S. President's Science Advisory Committee (1969–72) and on the President's Committee of Advisors on Science and Technology (1994–2001).

Among numerous awards and honors, Gell-Mann was the recipient of the Albert Einstein Medal of the Albert Einstein Society (2005), the Ernest Orlando Lawrence Memorial Award of the Atomic Energy Commission (1996), the Franklin Medal of the Franklin Institute (1967), and the John J. Carty Award of the National Academy of Sciences (1968). In 1988, Gell-Mann was listed on the United Nations Environment Programme's Roll of Honour for Environmental Achievement. He also shared the 1989 Ettore Majorana "Science for Peace" prize.

He is survived by his children Nicholas Gell-Mann and Elizabeth Gell-Mann; and stepson Nicholas Southwick Levis.