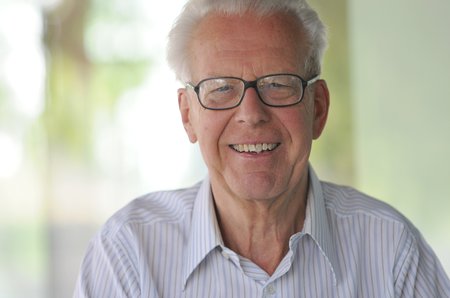 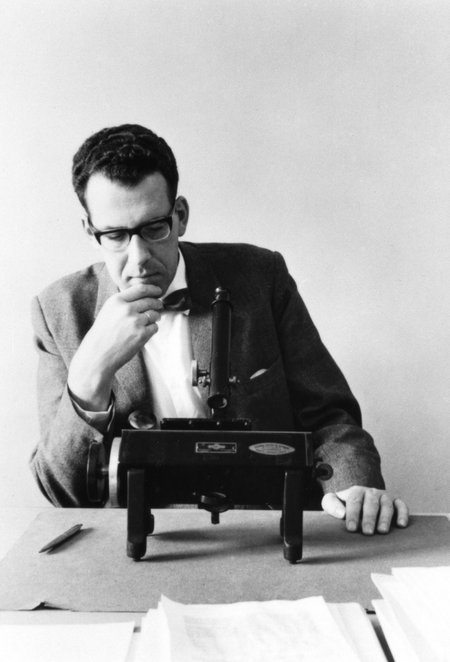 Maarten Schmidt used this microscope to examine quasar spectra. The photo was taken after his 1965 discovery of five quasars residing in the early universe. Credit: James McClanahan, E&S magazine, May 1965. Courtesy of the Caltech Archives 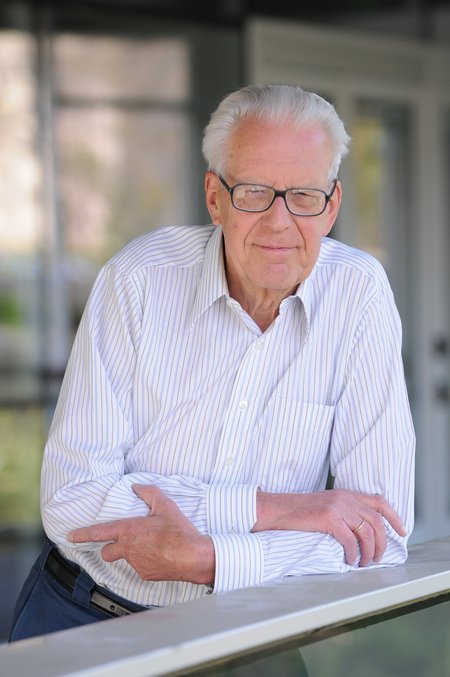 Maarten Schmidt, Francis L. Moseley Professor of Astronomy, Emeritus, at Caltech, passed away on Saturday, September 17, 2022. He was 92 years old. Schmidt is best known for his 1963 discovery of quasars—ferociously bright and faraway cosmic objects powered by supermassive black holes. At the time of their discovery, quasars, which are typically billions of light-years away, were among the farthest objects known in the universe. Schmidt's discovery in essence broke open the exploration of the distant universe and even placed him on the cover of Time magazine in 1966. Later, in 2008, Schmidt, together with former Caltech postdoc Donald Lynden-Bell, would win the inaugural Kavli Prize for their quasar findings.

"In the '60s, people were astonished that a single quasar that sits in a galaxy could be so bright and yet so very far away," says Richard Ellis, a former Caltech professor and colleague of Schmidt's who is now based at University College London and remains a visiting associate at Caltech. "Many people didn't believe it and thought these objects must be in our Milky Way galaxy. His discovery created this excitement that the 200-inch [telescope at Palomar Observatory] could look back at the evolution of our universe."

In addition to his research, Schmidt worked in administration at Caltech, serving as the executive officer for astronomy from 1972 to 1975, chair of the Division of Physics, Mathematics and Astronomy from 1976 to 1978, and director of the Hale Observatories from 1978 to 1980. He was president of the American Astronomical Society from 1984 to 1986. He ultimately returned to research full time and continued to study quasars, revealing how they evolve over cosmic time.

Schmidt was born on December 28, 1929, in Groningen, the Netherlands. In an essay about his life that he wrote for the Kavli Prize website at the time of his award, Schmidt talked about first gazing at the stars during World War II, when Germany occupied the Netherlands. "All during the war, a strict blackout was enforced. This made it possible to see the night sky even in the middle of the city. My father would often take me on a walk at night, unless there was an air alarm when Allied bombers would fly over, or sometimes bombard, the city of Groningen. These walks may well have played a role in awakening my interest in astronomy."

Schmidt's uncle, Dik Schmidt, a pharmacist and amateur astronomer, also helped shape his interest in the cosmos. In the Kavli essay, Schmidt wrote that his uncle "showed me the sky through his telescope on an upper floor of his pharmacy. I found a lens at my paternal grandfather's workshop in Berkhout and soon put my first little telescope together." (Schmidt's first telescope consisted of a lens and a toilet paper roll, as he described in his oral history for the Caltech Archives.)

Schmidt and his friend Jan Borgman, who would go on to become an astronomer and the president of the University of Groningen, also built telescopes when they were young. The two met while walking to school, when Schmidt was in the fourth grade and Borgman in the second grade. In his oral history, Schmidt describes grinding mirrors for telescopes in a metal shop with Borgman in wartime Holland in 1944. "In these circumstances, where you couldn't find tires for your bicycle, where there was no butter, no sugar, essentially no meat—there was a very small amount of bread, but all rationed—we managed to build telescopes under those circumstances."

In the Oort Cloud

After earning his bachelor's and master's degrees from the University of Groningen, Schmidt moved to Leiden. While attending an astronomy conference, he met the astronomer Jan Oort, who was the first to describe a cocoon of comets surrounding our solar system, now called the Oort cloud. Oort invited Schmidt to be an assistant at Leiden Observatory. Schmidt accepted, and after as short post in the army, he returned to the observatory and ultimately attended graduate school at Leiden University, earning his PhD in 1956. There, he worked with his advisor Oort to measure the brightness of comets and study how their brightness changes as the comets travel in toward the sun.

During this time, Schmidt left Leiden for about 15 months to work at a Dutch observatory in Kenya, where he measured the position of stars as a means to understand the structure of the galaxy. In his oral history, Schmidt talks about his time in Kenya, saying he played a lot of bridge, learned Swahili, and made sure to watch out for the local leopards sleeping in nearby trees. He also talked about the beautiful views from the observatory.

"The site was really remarkable. It was more than 9,000 feet high, in the highlands of Kenya, way inland. … It was very beautiful. At sunset, we could often see Lake Victoria in reflection down there. At sunrise, I could see Mount Kenya, which is way above Nairobi, hundreds of miles north."

To the Milky Way and Beyond

After earning his PhD, Schmidt did postdoctoral work at the Mount Wilson and Mount Palomar observatories for two years as a Carnegie Fellow. He then returned to the University of Leiden for one year before moving to the United States to work at Caltech. Schmidt joined Caltech in 1959 as an associate professor of astronomy. He became full professor in 1964, Institute Professor in 1981, and Moseley Professor in 1987.

Around the time he arrived at Caltech, Schmidt focused on the mass distribution and dynamics of galaxies. During this period, he published a paper titled "The Rate of Star Formation," in which he outlined a relationship between gas density and star formation rate in a given region—a relationship that came to be known as the Schmidt law. "When a galaxy forms, it's one big ball of gas, and stars form out of it," said Schmidt in his oral history. "And when these stars age and die, they throw much of the gas out into the galaxy again, and then new stars are formed from that. So, there is an exchange between the mass going into stars and then eventually back into the gas in the galaxy, from which new stars are formed."

In the early 1960s, Schmidt began studying a strange source of radio waves, called 3C 273, that had been identified in Australia by astronomer Cyril Hazard. The object was shared with astronomer Tom Matthews of Caltech who passed it to Schmidt for further observations. The object appeared to be a star but was much brighter. Schmidt spent a couple of nights pointing Caltech's 200-inch Hale Telescope at 3C 273 and captured its spectrum. If the object were a star, it should have recognizable fingerprints of atoms, such as hydrogen. But the observed spectral lines were a complete mystery.

That is until Schmidt, sitting in his office at Caltech, had the remarkable realization that he was in fact looking at the spectral signature of hydrogen. The signature was there all along but had been shifted to the red end of the spectrum, or "red shifted," due to the expansion of the universe. 3C 273 was not a nearby star but something traveling away from us at 30,000 miles per second that is, shockingly, 3 billion light-years away.

"So I got all excited, I must say," recalled Schmidt in his oral history. "I was pacing up and down in the office … [a]nd here I see Jesse [Greenstein]. I say, 'Jesse, come and see what happened.' So I showed him. He said, 'Oh my god.'" Greenstein had been working on a similarly perplexing object, which the two astronomers then realized was also an incredibly bright beacon shining from far beyond the Milky Way.

"I once heard Maarten say that at first he had no idea what was going on," says Caltech's Anneila Sargent (MS '67, PhD '77), the Ira S. Bowen Professor of Astronomy, Emeritus, recalling a talk Schmidt gave about the discovery years later. (Sargent's husband, the late Wallace Sargent, who was also a professor of astronomy at Caltech, was good friends with Schmidt; the two would have coffee every morning for years.) "Maarten tried anything and everything to explain the signatures. When he finally tried the hydrogen line spectrum, he found it hard to believe. I think it helped that he brought an unusually open mind to the problem because this was not his main field at the time."

Schmidt would go on to observe several more of these "quasi-stellar objects," or quasars, at great distances, developments that he said were "really explosive," and kicked off efforts to look farther back into the history of the universe. (The term "quasar" was actually coined by Hong-yee Chiu in a 1964 article in Physics Today). Then, in 1969, Cambridge astronomer Lynden-Bell solved the mystery of what powers quasars. His work confirmed that disks of material circling around supermassive black holes are pulled on by the enormous gravity of the black holes, heating up the material and releasing intense amounts of light.

In later work, Schmidt studied how quasars evolve over time primarily using telescopes at Palomar Observatory. Ultimately, he and his colleagues showed that the peak of quasar formation occurred between 10 billion and 11 billion years ago. Schmidt also worked on ROSAT (Röntgen X-Ray Satellite) and studied gamma-ray bursts with the Compton Gamma Ray Observatory.

In addition to the Kavli Prize, Schmidt is the recipient of numerous awards and honors, including the Bruce Medal (1992), the James Craig Watson Medal (1991), the Gold Medal of the Royal Astronomical Society (1980), the Henry Norris Russel Lectureship (1978), and the Helen B. Warner Prize (1964).

Marshall Cohen, professor of astronomy, emeritus, who shared an office with Schmidt for many years, recalls having regular lunches with Schmidt at Caltech's Athenaeum. They dined at a designated table there, informally referred to as the "old folks table," where they talked about a wide range of current issues in science and engineering. Schmidt would "bring order to the table discussions," according to Cohen. "He had a very thoughtful and controlled way of speaking," says Cohen. "He knew what he was talking about and was very good at public speaking."

Later in life, Schmidt could be found having dinner at Celestino restaurant in Pasadena with his wife, Cornelia (Corrie),recalls Ellis. "When Maarten won the 'big prize,' the inaugural Kavli award jointly with Donald Lynden-Bell, Corrie, announced that she had decided with such a magnificent financial prize she saw no reason to continue to cook for Maarten!" says Ellis. "Accordingly, they set up a near-permanent dining arrangement every night at Celestino. Like many, I often dined there and saw Maarten and Corrie in the distance and often went to say hello." Sargent adds, "Eventually visiting astronomers who couldn't find Maarten on campus were told to go to Celestino."

Schmidt was married to Corrie Schmidt-Tom for 65 years. She passed away in 2020. He is survived by his three daughters: Elizabeth, Marijke, and Anne, four grandchildren, and five great-grandchildren.