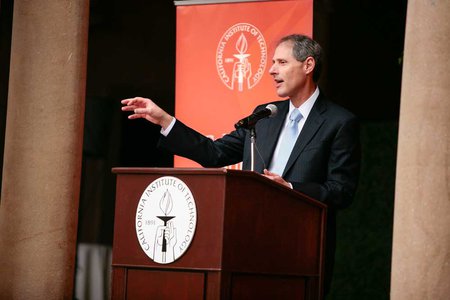 To: The Caltech Community

Today it is our great privilege to announce the appointment of Thomas F. Rosenbaum as the ninth president of the California Institute of Technology.

Dr. Rosenbaum, 58, is currently the John T. Wilson Distinguished Service Professor of Physics at the University of Chicago, where he has served as the university's provost for the past seven years. As a distinguished physicist and expert on condensed matter physics, Dr. Rosenbaum has explored the quantum mechanical nature of materials, making major contributions to the understanding of matter near absolute zero, where such quantum mechanical effects dominate. His experiments in quantum phase transitions in matter are recognized as having played a key role in placing these transitions on a theoretical level equivalent to that which has been developed for classical systems.

But Dr. Rosenbaum's scientific achievements were not solely what captured and held the attention of those involved in the presidential search. We on the search committee were impressed by Dr. Rosenbaum's deep dedication, as Chicago's provost, to both undergraduate and graduate education—both critical parts of Caltech's mission. He has had responsibility for an unusually broad range of institutions and intellectual endeavors. Among his achievements as provost was the establishment of the Institute for Molecular Engineering in 2011, the University of Chicago's very first engineering program, in collaboration with Argonne National Lab.

We also believe that Dr. Rosenbaum's focus on strengthening the intellectual ties between the University of Chicago and Argonne National Lab will serve him well in furthering the Caltech-JPL relationship.

As provost, Dr. Rosenbaum was also instrumental in establishing collaborative educational programs serving communities around Chicago's Hyde Park campus, including the university's founding of a four-campus charter school that was originally designed to further fundamental research in education but which has also achieved extraordinary college placement results for disadvantaged Chicago youths.

This successful conclusion to our eight-month presidential search was result of the hard work of the nine-member Faculty Search Committee, chaired by Fiona Harrison, and the 10-member Trustee Selection Committee, chaired by David Lee. We are grateful both to the trustees and faculty on our two committees who made our job so very easy as well as to those faculty, students, staff, and alumni who provided us with input and wisdom as we scoured the country for just the right person for our Caltech.

"Tom embodies all the qualities the faculty committee hoped to find in our next president," Harrison says. "He is a first-rate scholar and someone who understands at a deep level the commitment to fundamental inquiry that characterizes Caltech. He is also the kind of ambitious leader who will develop the faculty's ideas into the sorts of innovative ventures that will maintain Caltech's position of prominence in the next generation of science and technology."

"The combination of deep management experience and visionary leadership Tom brings will serve Caltech extremely well in the coming years," Lee adds. "The Board is excited about collaborating closely with Tom to propel the Institute to new levels of scientific leadership."

"The Caltech community's palpable and deep commitment to the Institute came through in all my conversations, and it forms the basis for Caltech's and JPL's lasting impact," Dr. Rosenbaum says. "It will be a privilege to work closely with faculty, students, staff, and trustees to explore new opportunities, building on Caltech's storied accomplishments."

Dr. Rosenbaum received his bachelor's degree in physics with honors from Harvard University in 1977, and both an MA and PhD in physics from Princeton University in 1979 and 1982, respectively. He did research at Bell Laboratories and at IBM Watson Research Center before joining the University of Chicago's faculty in 1983. Dr. Rosenbaum directed the university's Materials Research Laboratory from 1991 to 1994 and its interdisciplinary James Franck Institute from 1995 to 2001 before serving as vice president for research and for Argonne National Laboratory from 2002 to 2006. He was named the university's provost in 2007. His honors include an Alfred P. Sloan Research Fellowship, a Presidential Young Investigator Award, and the William McMillan Award for "outstanding contributions to condensed matter physics." Dr. Rosenbaum is an elected fellow of the American Physical Society, the American Association for the Advancement of Science, and the American Academy of Arts and Sciences.

Joining the Caltech faculty will be Dr. Rosenbaum's spouse, Katherine T. Faber, the Walter P. Murphy Professor of Materials Science and Engineering at Northwestern University. Dr. Faber's research focuses on understanding stress fractures in ceramics, as well as on the fabrication of ceramic materials with controlled porosity, which are important as thermal and environmental barrier coatings for engine components. Dr. Faber is also the codirector of the Northwestern University-Art Institute of Chicago Center for Scientific Studies in the Arts (NU-ACCESS), which employs advanced materials science techniques for art history and restoration. Dr. Rosenbaum and Dr. Faber have two sons, Daniel, who graduated from the University of Chicago in 2012, and Michael, who is currently a junior there.

Dr. Rosenbaum will succeed Jean-Lou Chameau, who served the Institute from 2006 to 2013, and will take over the helm from interim president and provost Ed Stolper on July 1, 2014. The board, the search committee, and, indeed, the entire Institute owes Dr. Stolper a debt of gratitude for his unwavering commitment to Caltech, and for seamlessly continuing the Institute's forward momentum through his interim presidency.

As you meet Dr. Rosenbaum today and over the coming months, and learn more about his vision for Caltech's future, we believe that you will quickly come to see why he is so well suited to guide Caltech as we continue to pursue bold investigations in science and engineering, to ready the next generation of scientific and thought leaders, and to benefit humankind through research that is integrated with education.