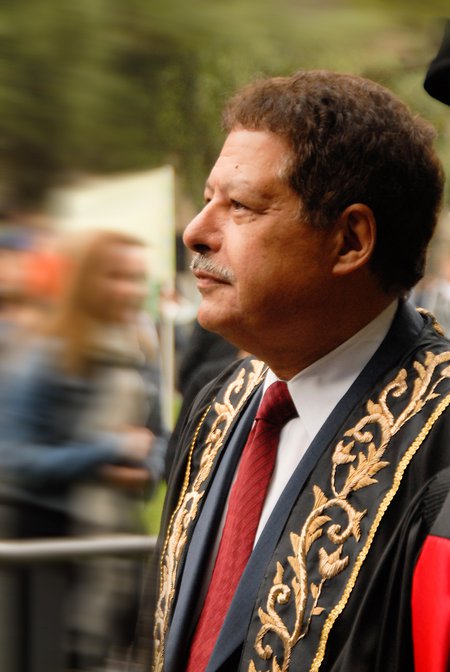 Ahmed Zewail, Linus Pauling Professor of Chemistry and professor of physics, has been selected as one of 26 members of a new Scientific Advisory Board established by the United Nations secretary-general.

The board, which will meet twice per year, will provide advice on science, technology, and innovation concerning sustainable development to the secretary-general and the heads of UN organizations. The creation of this new board, which was formally announced September 24 at the UN's first High-Level Political Forum on Sustainable Development, was the result of a recommendation from the report of the High-Level Panel on Global Sustainability in January 2012.

Made up of scientists from various fields in the natural, social, and human sciences, the board will have the main objective of improving the linkage between science and policy and of ensuring that up-to-date and rigorous science is reflected in policy discussions within the UN. In addition, board members will also advise on issues related to the public visibility and public understanding of science. The United Nations Educational Scientific and Cultural Organization (UNESCO) will serve as the secretariat of the board.

"I am pleased to be a member of this United Nations Scientific Advisory Board. Its objectives coincide with my vision to promote science in education and science in diplomacy," Zewail says. "The UN is an excellent platform for an outreach to all nations."

In 1999, Professor Zewail was awarded the Nobel Prize in Chemistry for developing the field of femtochemistry, which uses ultrashort laser flashes to enable the study of chemical reactions in real time at the scale of quadrillionths of a second. He and his group later developed a technique called four-dimensional electron microscopy for the direct imaging of matter in the three dimensions of space and in time with applications spanning the physical and biological sciences.

He is currently director of the Center for Physical Biology at Caltech funded by the Moore Foundation.

Zewail's new involvement with the UN reflects his long-standing interest in global affairs, particularly as they relate to science, education, and world peace. His commentaries on such global issues have been presented in numerous articles, a number of books, and public addresses all over the world. Since the 2011 revolution in Egypt—his native country—Zewail has also played a critical role in that nation's events.

In addition to his international interests, Zewail has been involved in domestic science policy. In 2009, he was appointed to President Obama's Council of Advisors on Science and Technology, and he was named the first U.S. Science Envoy to the Middle East as part of a program sponsored by the White House and the State Department to foster science and technology collaborations between the United States and nations throughout the Middle East, North Africa, and South and Southeast Asia.

Among other honors, Zewail has received the Albert Einstein World Award of Science, the Benjamin Franklin Medal, the Robert A. Welch Award, the Leonardo da Vinci Award, the Wolf Prize, the Priestley Medal, and the King Faisal International Prize. He is a recipient of the Grand Collar of the Order of the Nile, Egypt's highest state honor, and has been featured on postage stamps issued to honor his contributions to science and humanity. Zewail holds honorary degrees from 40 universities around the world and is an elected member of many professional academies and societies, including the National Academy of Sciences, the American Philosophical Society, The Royal Society of London, and the Swedish, Russian, Chinese, and French academies. In recognition of his contributions as a world leader in science and public service, he has received the Top American Leaders award given jointly by the Washington Post and Harvard Kennedy School's Center for Public Leadership.