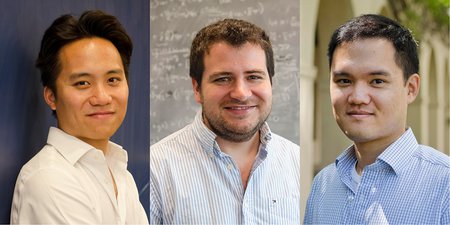 Cheung, a member of the Caltech Particle Theory Group, received his PhD from Harvard University in 2009 and joined the Caltech faculty in 2012. Caltech professor of physics and former executive officer for physics Kenneth G. Libbrecht says he expects Cheung to assume a leadership role in the theoretical particle physics field as new discoveries at the Large Hadron Collider and other facilities "cause scientists to revise their current understanding of the laws of nature at the most fundamental level."

Phillip Hopkins received his PhD from Harvard in 2008 and became a member of the Caltech faculty in 2013. A theoretical and computational astrophysicist, Hopkins studies the formation and evolution of galaxies, stars, and supermassive black holes throughout the universe. According to Caltech professor of theoretical astrophysics and executive officer for astronomy E. Sterl Phinney, Hopkins has a "unique ability to synthesize vast quantities of complicated observational data, identify physical and computational models that will improve our understanding of that data, and communicate this to the world in a way that inspires further investigation."

David Hsieh received his PhD from Princeton University in 2009 and joined the Caltech faculty in 2012. Hsieh's research focuses on spectroscopic investigations of topologically ordered electronic systems. According to Libbrecht, Hsieh is well-known in the physics research community for his expertise in angle-resolved photo-emission spectroscopy measurements. "He is clearly a gifted experimental physicist, and he seems destined to become a central figure in the emerging study of 3-D topological materials."

"Caltech has a well-established reputation for excellence in physics research and education," says B. Thomas Soifer, professor of physics and chair of Caltech's Division of Physics, Mathematics and Astronomy. "The fact that three early-career Caltech physicists were chosen to receive Sloan Research Fellowships for 2014 is a sign of the Institute's strength in this area, and it shows great promise for the future."