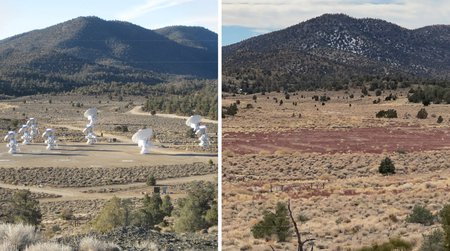 A before and after look at the CARMA site in the Inyo Mountains. The patchy area of land without vegetation (right) has been seeded by native plants. Credit: Nick Sower/TEAM Engineering & Management, Inc.
Tags:
instrumentation, astronomy & physics

On December 8, officials at the U.S. Forest Service declared the restoration of the mountainous site of the former CARMA radio telescopes to be complete. As part of the decommissioning process for the venerable radio observatory, which leased land in the Inyo Mountains of eastern California from the U.S. Forest Service from 2004 to 2015, its structures were removed and terrain restored to its original state.

"I have mixed feelings," says James Lamb, a Caltech instrument scientist who has worked at the nearby Owens Valley Radio Observatory (OVRO) for 25 years and helped oversee the restoration of the CARMA site. "CARMA was very productive in radio astronomy, and we were sad to see it go, but we are also proud that we did our best to return the land to its natural state."

CARMA, or the Combined Array for Research in Millimeter-wave Astronomy, was one of the most successful millimeter radio observatories in the world (millimeter waves are on the higher-frequency end of the radio portion of the electromagnetic spectrum). The array made many discoveries in the areas of stellar birth, early planet formation, supermassive black holes, galaxies, galaxy mergers, and more.

Originally consisting of 15 radio dishes belonging to a consortium of Caltech's OVRO and the Berkeley-Illinois-Maryland Association (BIMA), the array later acquired eight more dishes from the University of Chicago. CARMA's site in the Inyo Mountains was chosen over that of OVRO, which sits in a valley to the west, because millimeter observations require dry air.

"Blobs of water in the air can corrupt the signal of radio waves that we're trying to observe," explains Lamb. "The air at higher elevations has less water in it."

As part of CARMA's contract with the U.S. Forest Service to lease the land, the consortium agreed to restore the site to resemble its original state. This process included removing buildings and other equipment, as well as recontouring hills and narrowing roads. The final phase involved revegetating the land.

Two outside companies were contracted to help with the environmental engineering. Amec Foster Wheeler came up with the original design for revegetation as well as metrics for monitoring the progress, while TEAM Engineering & Management Inc., oversaw the seeding of the land with native plants, such as sagebrush and grasses.

"In some ways, the hardest part was the revegetation," says Lamb, "since that is very unpredictable, particularly with the significant changes we are seeing in our climate."

Most of CARMA's telescope dishes were previously moved back to OVRO, while some, owned by the University of Arizona, are now at various sites in Arizona and Colorado. The largest of the telescopes, named Leighton dishes for the late Caltech professor Robert Leighton (BS '41, MS '44, PhD '47), who designed them in the 1970s, are now at OVRO and are being repurposed for other projects, including COMAP, or Carbon Monoxide (CO) Mapping Array Pathfinder, which studies the evolution of galaxies. One dish is also slated for use by EHT, or the Event Horizon Telescope, a worldwide network of radio dishes that image supermassive black holes.

Lamb says that taking care of the environment, as well as relationships with the Big Pine Paiute native people who live in the area, is vital to the success of OVRO. Representatives of the tribe were involved in the decommissioning of CARMA and will play a role in the prototype installation of the proposed DSA-2000 project, a vast network of 2,000 dishes. The plan is to construct the prototype antennas at OVRO, with the final array placed at a site to be selected in Nevada not far from OVRO. This goal of the project is to create the first real-time radio images.

"Native people have a very long history with this area," says Lamb. "We acknowledge their willingness to work with us in ensuring that modern technology and ancient customs can coexist on the same sites."