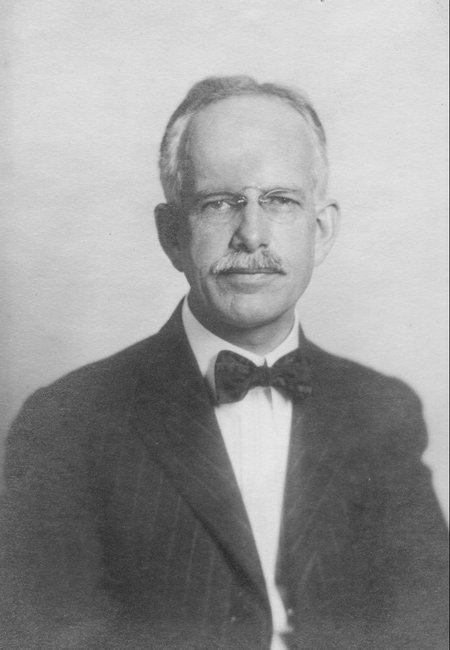 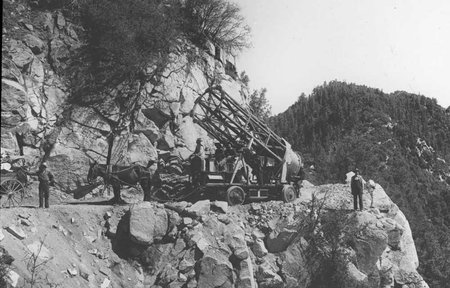 The 60-inch telescope tube being transported to the top of Mount Wilson. Credit: Carnegie/ Huntington Library 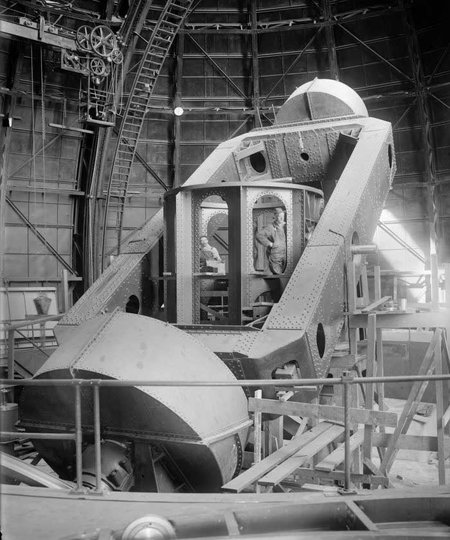 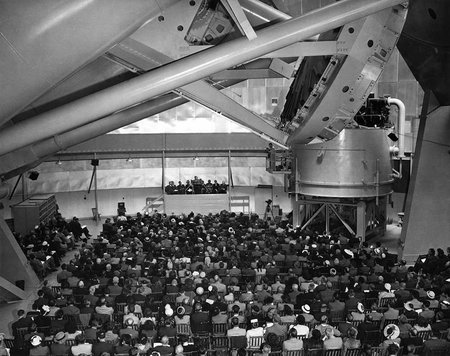 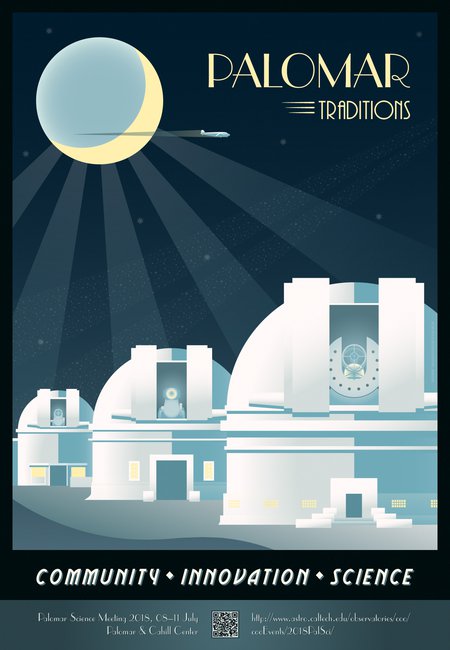 The Palomar Observatory has created a series of posters for the Palomar 2018 science meeting, in commemoration of the 70th anniversary of the Hale Telescope. Digital, high-resolution versions are available for downloading here. Credit: Palomar/Caltech /A. Mejía
Tags:
instrumentation, Institute affairs, astronomy & physics

When George Ellery Hale climbed Mount Wilson, a nearly 6,000-foot peak rising high above Pasadena, in 1903, he had a vision for building a new and bigger window to the cosmos. He had already built the world's largest telescope at the University of Chicago's Yerkes Observatory, but Hale wanted a superior vista to the stars and would soon oversee construction of the 60-inch telescope on Mount Wilson, which would be, for nearly a decade, the world's largest. Over the coming decades, he would help build the world's largest telescope twice more: the 100-inch Hooker Telescope at Mount Wilson, completed in 1917, and the 200-inch Hale Telescope at Caltech's Palomar Observatory, which was dedicated in 1948, 10 years after Hale's death.

That might sound like more than a lifetime of accomplishments for one person, but Hale's vision was also responsible for helping transform a small Pasadena vocational school called Throop University—founded in 1891—into Caltech, one of the top science and engineering universities in the world.

"Hale was a one-man show who had a hunger to make things happen," says Shrinivas (Shri) Kulkarni, who this year was named Caltech's George Ellery Hale Professor of Astronomy and Planetary Science. "The telescopes he built are just magnificent, and the 200-inch Hale Telescope at Palomar is still doing cutting-edge science today, 70 years after it opened. Somehow Hale managed to transform Caltech into a premier science university, build the world's largest telescopes four times over, talk the railroad and real estate businessman Henry Huntington into making Pasadena a cultural destination, get the beautiful city hall built, and more."

In celebration of Hale's 150th birthday on June 29, 2018, Mount Wilson is hosting a series of events on June 30 and July 1, including free public tours and stargazing. In July, Caltech is hosting a science conference to be held at both Palomar Observatory and the Caltech campus in honor of the 70th anniversary of the 200-inch Hale Telescope. During that conference, there will be a public lecture at Caltech—on Tuesday, July 10, at 2 p.m.—featuring Ronald Florence, author of The Perfect Machine, a book about the building of Hale Telescope. The event will also include the official dedication for Palomar's newest instrument, the Zwicky Transient Facility.

Stargazing from His Bedroom

George Ellery Hale was born in 1868 in Chicago. His father, a wealthy elevator manufacturer, instilled in Hale a love for tools and public affairs; his mother, an appreciation for classic literature such as The Iliad and The Odyssey and stories like Robinson Crusoe and Grimm's Fairy Tales. Hale's passion for astronomy began at a young age, when he transformed his bedroom into a laboratory and built a small telescope for observing the spectral lines of the sun. After high school, he studied physics at MIT—returning home during his summers off to continue his solar research in a special lab built for him by his father on a lot next to their home.

Hale then went on to become a professor of astrophysics at the University of Chicago, where he persuaded the streetcar magnate Charles T. Yerkes to donate funds for the university's 40-inch refracting telescope, the Yerkes Observatory, which opened in 1897.

Hale, like other astronomers of his time, knew that bigger and bigger telescopes would ultimately be needed to collect more light from the beckoning cosmos. With more light-collecting power, telescopes can study astronomical objects in more detail and see farther into space. After earning support from the Carnegie Institution of Washington, Hale oversaw the construction of the 60-inch telescope at Mount Wilson, which at the time—before light pollution took over Los Angeles—was a pristine site for astronomical viewing. The 60-inch, and the subsequent observatories Hale would help build, were all reflecting telescopes, meaning they consisted of mirrors instead of the lenses used in refracting telescopes like Yerkes. Refracting telescopes have limits to their size because the lenses become too heavy, while reflecting telescopes are easier and cheaper to make in large sizes.

Discoveries made using the 60-inch include astronomer Harlow Shapley's revelation that our sun is not at the center of our Milky Way galaxy but rather located about halfway out, toward the edge of its spiral disk.

Despite the challenges of building the 60-inch on Mount Wilson—a harrowing endeavor that, at times, involved cutting roads into the mountain for horse- and mule-drawn carts—Hale wanted to build a still larger telescope at the same location. Securing funding from philanthropists John Hooker and Andrew Carnegie, Hale oversaw construction of the 100-inch Mount Wilson telescope, which opened in 1917.

"The 100-inch was a game changer and probably the most successful telescope in all of history," says Kulkarni.

Using the 100-inch, astronomer Edwin Hubble made observations that showed our universe consists of not just one galaxy but many and that galaxies are racing away from each other, indicating the expansion of the universe. Other discoveries include Shapley's first realistic estimate of the size of our Milky Way galaxy and the first evidence of dark matter, a finding from Caltech's Fritz Zwicky, the namesake of the Zwicky Transient Facility.

The Fourth and Last of Hale's "World's Largest Telescopes"

In the 1920s, Hale once again made the case that an even larger telescope was needed to further explore the hidden universe. In a 1928 Harper's Magazine article, he wrote, "Like buried treasures, the outposts of the Universe have beckoned to the adventurous from immemorial times. … Each expedition into remoter space has made new discoveries and brought back permanent additions to our knowledge of the heavens." That same year, Hale had secured funds from the Rockefeller Foundation for a 200-inch telescope at Palomar Mountain.

The 200-inch project was enormously complex, requiring many innovations. For example, the mirror—a 200-inch, 14.5-ton piece of Pyrex glass—was carefully ground and shaped in the optical shop at Caltech, where it resided for 11.5 years in part due to delays caused by World War II. When the mirror was originally delivered to Caltech by train in 1936, thousands of people lined the tracks to watch it pass.

The 200-inch was dedicated as the Hale Telescope in June 1948 and opened in 1949. It remained the world's largest working telescope until 1993, when the W. M. Keck Observatory in Hawaii opened.

"The 200-inch is where our knowledge of the expansion of the universe went from a first detection to the opening of a new field—observational cosmology," says Andy Boden, deputy director of Caltech Optical Observatories, who explains that much of the research around the expansion of the universe was done with this telescope. Other findings include the determination of the chemical compositions of stars, which led to the discovery of how elements are made in stars, and the first signs of black holes, previously only theorized. Today, the telescope is still a major workhorse in astronomy.

Somehow, in the midst of revolutionizing astronomy, Hale helped found Caltech. As a member of the board of trustees of the Throop College of Technology (the university's name as of 1913), Hale recruited two well-known scientists—chemist Arthur A. Noyes from MIT and physicist Robert A. Millikan from the University of Chicago—to Pasadena, and the three would transform Caltech into a renowned science university. (Millikan's 150th birthday anniversary is also this year.) Throop was renamed the California Institute of Technology in 1920, around the time that Millikan, Noyes, and Hale were recruiting the brightest minds to the Institute.

Today, 150 years after the birth of one of Caltech's founders, the Institute is still a leader in observational astronomy and instrumentation. Caltech is a partner in the Thirty Meter Telescope (TMT), which, when completed in the late 2020s, will be one of only a few new extremely large telescopes, dwarfing those in operation today.

"Hale's vision and leadership made Pasadena the center of the astronomer's universe," says George Djorgovski, a professor and executive officer for astronomy at Caltech. "Without him, Caltech—with its impact reaching far beyond astronomy—would not have existed. I think that Hale would have been proud to see where his vision led."