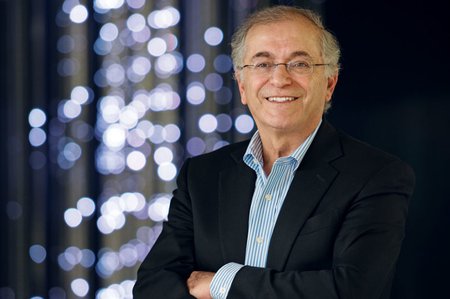 Charles Elachi (PhD '71), professor of electrical engineering and planetary science, emeritus, at Caltech, has been selected to receive the 2020 Michael Collins Trophy for Lifetime Achievement, a trophy presented by the Smithsonian's National Air and Space Museum for "outstanding achievements in the fields of aerospace science and technology and their history." The trophy was renamed this year for the Apollo 11 command module pilot Michael Collins.

Elachi served as the director of the Jet Propulsion Laboratory (JPL), from 2001 to 2016, overseeing more than 20 missions, including several Earth-surveying missions; the Cassini mission to Saturn and the Juno mission to Jupiter; the Dawn asteroid-exploration mission; and three Mars rovers: Spirit, Opportunity, and Curiosity, the latter of which is still roaming Mars.

"Charles Elachi is an inspired choice," says Thomas Rosenbaum, Caltech president, Sonja and William Davidow Leadership Chair and professor of physics. "His contributions extend from influential technology development to unparalleled leadership of JPL to the embodiment of space exploration on the international scene. We join the Smithsonian in celebrating Charles's accomplishments."

He began teaching at Caltech in 1971 while also serving in various management positions at JPL, which Caltech manages for NASA. Before Elachi became director of JPL, he led a team that pioneered the use of space-based radar imaging of Earth and the planets, and served as principal investigator on a number of NASA studies and flight projects. In 1994, he became the director for the Space and Earth Science Programs at JPL.

Elachi is the recipient of numerous other awards, including the Aviation Week Lifetime Achievement Award (2016), an honorary doctorate from the American University of Beirut (2013), the National Academy of Engineering Arthur M. Bueche Award (2011), the Chevalier de la Légion d'Honneur from the French Republic (2011), the American Institute of Aeronautics and Astronautics Carl Sagan Award (2011), the Royal Society of London Massey Award (2006), the Lebanon Order of Cedars (2006 and 2012), the International von Kármán Wings Award (2007), the American Astronautical Society Space Flight Award (2005), the NASA Outstanding Leadership Medal (2004, 2002, 1994), and the NASA Distinguished Service Medal (1999).

He has also taken part in several archaeological expeditions in the Egyptian desert, the Arabian Peninsula, and the western Chinese desert, using satellite data to search for old trading routes and buried cities.

Elachi will be presented with the Michael Collins Trophy at a ceremony at the museum on March 26.