The City of Astronomy 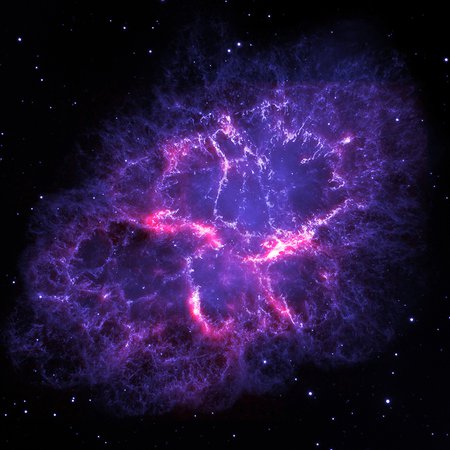 This image shows a composite view of the Crab nebula, an iconic supernova remnant in our Milky Way galaxy, as viewed by the Herschel Space Observatory and the Hubble Space Telescope. The image combines Hubble's view of the nebula at visible wavelengths, obtained using three different filters sensitive to the emission from oxygen and sulphur ions and is shown here in blue. Herschel's far-infrared image reveals the emission from dust in the nebula and is shown here in red. Credit: ESA/Herschel/PACS/MESS Key Programme Supernova Remnant Team; NASA, ESA and Allison Loll/Jeff Hester (Arizona State University)
Tags:
Institute affairs, astronomy & physics, earth & planetary science

Pasadena has a rich history of astronomy discoveries, from the exploration of planets at NASA's Jet Propulsion Laboratory (JPL), to the discovery of the universe's expansion at Mount Wilson Observatory, to determining the extragalactic distance scale of the universe at Carnegie Observatories. This year, 10 Pasadena-based scientific institutions and organizations have partnered to celebrate Pasadena as the "City of Astronomy" during Pasadena's first Astronomy Week from October 16–22.

"Royal Astronomer Martin Rees called Pasadena the center of 'the universe of astronomers' a generation ago," says Caltech president Thomas F. Rosenbaum, Sonja and William Davidow Presidential Chair and professor of physics. "Caltech is pleased to help build on this tradition and we are indebted to Mayor Terry Tornek for his leadership in making Astronomy Week a reality."

For the past 100 years, Caltech has been a hub for astronomy. The university facilitated the telescopes at Mount Palomar and Owens Valley in California, the twin Keck telescopes in Hawaii, and is a founder in the efforts to build the Thirty Meter Telescope, astronomy's next-generation observatory. Also at Caltech, the Infrared Processing and Analysis Center (IPAC) was founded more than 25 years ago to support the US astronomers using space-based astronomy programs. IPAC currently manages science operations for NASA's Spitzer Space Telescope, an infrared observatory that studies everything from planets to distant galaxies. NuSTAR, a NASA X-ray telescope, is exploring black holes, young exploded stars and many other phenomena, and is led by Fiona Harrison, the Benjamin M. Rosen Professor of Physics and Kent and Joyce Kresa Leadership Chair, Division of Physics, Mathematics and Astronomy at Caltech.

"Pasadena's concentration of astronomy facilities gives it a unique place in the world," says Gordon Squires, senior staff scientist with IPAC and coordinator of IPAC's involvement with Astronomy Week. "Institutions within Pasadena have developed, several times, the largest telescope in the world. Another interesting fact that many people don't know is that George Ellery Hale, a solar astronomer and one of the founders of Caltech, helped design the Pasadena Civic Center and City Hall, shaping and defining the character of our city. We are hoping that Pasadena Astronomy Week will be a place to tell these stories."

Pasadena Astronomy Week will begin with Carnegie Observatories' annual open house. Caltech will host three evenings of Astronomy on Tap—short talks, given by astronomers about general astronomy and astrophysics, at a bar in Old Town Pasadena called Der Wolfskopf. Astronomy on Tap was started this summer by the Caltech Astronomy Outreach group, led by NSF Postdoctoral Fellow Cameron Hummels. "Not only have Caltech scientists made seminal contributions to the field of astronomy, but we have worked extensively for public science education in the larger Los Angeles community with free public activities including lectures, stargazing, and discussions," Hummels says.

The week will also include stargazing opportunities at a Pasadena public elementary school and Mount Wilson, a public lecture at JPL, and the first Pasadena Astronomy Festival.

The week was chosen to coincide with the annual meeting of the Division of Planetary Sciences (DPS) of the American Astronomical Association, held in Pasadena this year. As part of Astronomy Week, DPS will host a free public talk and access to the conference's astronomy art exhibit.

"The DPS meeting is a major international astronomy conference. Its location in Pasadena this year is a great opportunity for partnership," says Squires.

A full list of events can be found here: http://www.cityofastronomy.org/events/