A Close Encounter of the First Kind 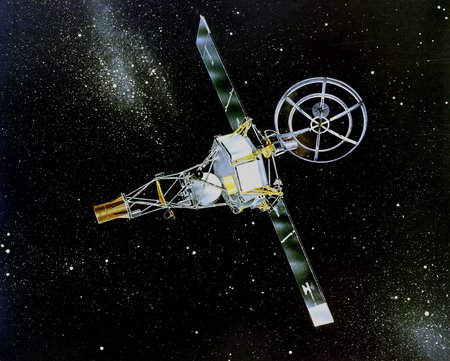 JPL's Mariner 2 was the world's first successful interplanetary spacecraft. On December 14, 1962, it passed within about 34,000 kilometers (21,000 miles) of Venus. The flyby found that Venus has no detectable magnetic field or radiation belts, and confirmed that the average temperature on the surface is about 500° C (900° F), hot enough to melt lead. Credit: NASA/JPL 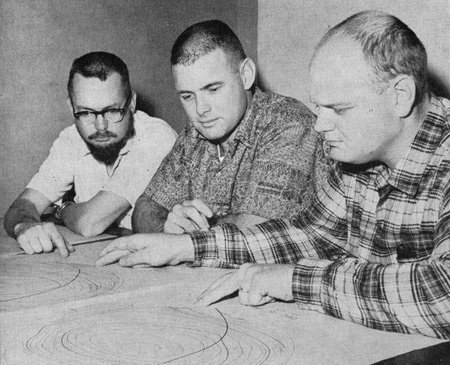 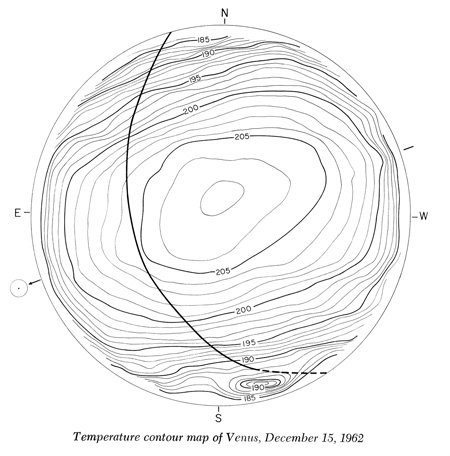 The first detailed map ever made of Venus's atmospheric temperatures was created from infrared data taken with the 200-inch Hale Telescope at Caltech's Palomar Observatory at the time of the Mariner 2 Venus flyby. The heavy black line marks the boundary between Venus's day and night sides, with the small circle to the left of Venus showing the sun's relative position. Temperatures grow colder toward the north and south poles, but are equal across the dark and sunlit sides, indicating a surprisin Credit: Bruce Murray
Tags:
Institute affairs, earth & planetary science

Fifty years ago today, on December 14, 1962, Mariner 2 became the world's first successful interplanetary mission when it swept some 21,000 miles above Venus's impenetrable veil of clouds. The flyby shattered any remaining illusions that Venus, Earth's near-twin in size and orbit, might be in any way habitable. It was known that Venus's atmosphere was incredibly dense and mostly carbon dioxide. Mariner discovered that it was at least 20 times more dense than Earth's (the latest estimate is 92 times as dense) and confirmed that this thick, insulating blanket trapped the sun's heat, making Venus's surface hot enough to melt lead—even on the night side.

Spaceflight is a high-risk business even today, but back then it was so dicey that JPL built everything in pairs. The Mariners' design was based on JPL's Ranger series of moon probes and used many of the same parts. Four Rangers had been launched by then, none of which had successfully completed their missions. And the moon is right next door, in planetary terms—a mere 239,000 miles, give or take, and a couple of days' journey. Mariner 2's flight path to Venus was a gently curving trajectory 182,000,000 miles long, and it would take 109 days to get there. Attempting a Venus shot was gutsy indeed.

The first Mariner didn't go well. It was blown up by Cape Canaveral's range safety officer within five minutes of launch on July 22, 1962. A succession of errors in the guidance system, including a typo in a critical line of computer code, was sending it plunging toward a watery doom—or worse, toward the Florida coast. Mariner 2 was dispatched to Canaveral post haste, and on August 27, a little more than a month later, it managed to make it into space successfully.

The spacecraft carried six instruments, four of which were designed to study deep space throughout the entire trip. A micrometeorite counter tallied hits from cosmic dust particles, which proved to be far less abundant out in the void than they were near Earth. The plasma detector, designed to study the portion of the sun's outermost atmosphere called the corona, revealed the existence of the solar wind—a continuous stream of plasma "blowing off the boiling surface of the sun into interplanetary space," as Caltech's Engineering & Science magazine reported in October 1962, when Mariner was still millions of miles from Venus. The wind "at times reaches hurricane force with outbursts, such as solar flares, on the sun. Even though this gas is exceedingly tenuous under any terrestrial scale, it is definitely dense enough, and is moving fast enough, to be able to push the interplanetary magnetic field around as it sees fit."

Mariner's magnetometer offered another surprise: Venus, unlike Earth, had no detectable magnetic field. This hinted that Venus probably rotated too slowly to generate one; Mariner's charged-particle detector corroborated this by showing that Venus has no radiation belts equivalent to Earth's Van Allen belts, either.

As Mariner approached Venus, the other two instruments were turned on: a microwave radiometer to measure surface temperatures, and an infrared radiometer to do the same for the atmosphere. Mariner carried no cameras; since Venus was a featureless ball of clouds, there didn't seem to be any point in dragging the extra weight along.

Meanwhile, down on the ground, Caltech postdocs Bruce Murray and Robert Wildey (BS '57, MS '58, PhD '62) and staff scientist Jim Westphal were scanning the face of Venus through the 200-inch Hale Telescope at Palomar Observatory, using a recently declassified infrared detector that had been developed for the heat-seeking Sidewinder missile. The system worked in the 10-micron band—wavelengths about 20 times longer than visible light—and performed up to 50 times better than civilian technology. The detector, a germanium crystal doped with mercury atoms, owed its extreme sensitivity to being cooled to –423° F in a bath of liquid hydrogen. (And yes, the Sidewinders carried a small supply of liquid hydrogen, which would boil off during flight—the thing was designed to blow up anyway.) "It was a mess," Murray, now a professor of planetary science and geology, emeritus, recalled in his Caltech oral history. "It leaked a lot."

Caltech physics professor Gerry Neugebauer (PhD '60) was on Mariner's infrared radiometer team, and about two weeks before the Venus encounter somebody realized that it might be a good idea to try to get some confirmatory data from the ground in case the spacecraft saw something big. The planetary scientists were granted a block of "twilight time" when the sky was too bright for deep-space observations, and in the hours before sunrise on the nights of December 13 through 16, the mighty 200-inch telescope was turned toward Venus. At that focal length, a patch of clouds just a few hundred miles in diameter filled the field of view, but this extreme close-up wasn't recorded as a picture. Instead, a pen line on a paper strip chart wobbled up and down with the intensity of the light received. The telescope methodically worked along horizontal tracks from top to bottom, taking as many as 30 passes to cover the disk.

"On the first night, which was the 13th, we got just these few scans, because we hadn't the slightest idea what we were doing," recalled Westphal (who also became a Caltech professor of planetary science) in an oral history for the Smithsonian Air and Space Museum. Even so, "higher up, the thing was obviously brighter on one side than it was on the other. [On] the other side of the planet, the inverse was true." Wildey wasn't on the mountain that first night, says Westphal, so "Bruce and I . . . stood there and we looked at the damn strip chart [in] the morning twilight; and we said, what do you suppose that is?" They drew a circle representing Venus and laid the strips of paper with the scans on top of it, "and since both of us had a background in geology, we kind of contoured it. . . . Cold at the top, cold at the bottom, and hot at the middle. We both stood there, and we grinned, and we said, we know which way the pole of Venus is!" The tilt of a planet's axis and the rate at which it spins are usually measured by tracking the progress of some landmark across the face of the disk, an impossible feat given Venus's cloud cover. But the atmosphere on a rotating planet will always have a band of warm air running along the equator and cold regions at the poles. "We knew something very fundamental about Venus that nobody [else] knew," Westphal continued.

Not even the Mariner team knew—the spacecraft's radiometers were programmed to scan across the planet's limb, or edge, looking sideways thorough the atmosphere in order to find out how the temperature varied with depth. These scans proved that Venus's stultifying heat was, in fact, radiating from its surface; the atmosphere's upper reaches turned out to be ice-cold.

JPL lost contact with Mariner 2 on January 2, 1963. The spacecraft is still in orbit around the sun, but a replica built at JPL from spare parts is on display in the Smithsonian's Air and Space Museum.