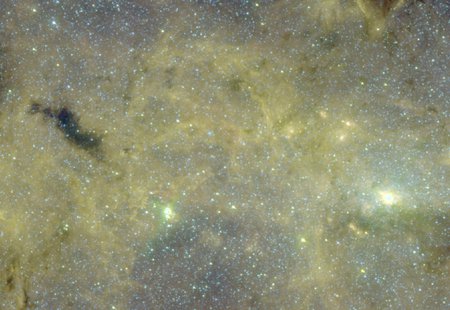 This image, taken with NASA's Spitzer infrared space telescope, shows the mysterious galactic cloud, seen as the black object on the left. The galactic center is the bright spot on the right. Credit: NASA/Spitzer/Benjamin et al., Churchwell et al. 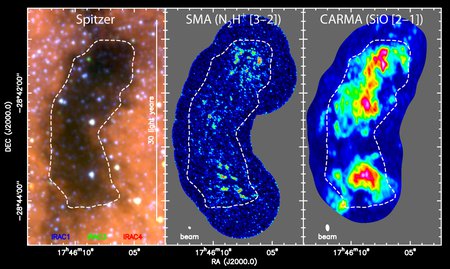 The Spitzer image of the cloud (left). The SMA image (center) shows the relative lack of dense cores of gas that are thought to form stars. The CARMA image (right) shows the presence of silicon monoxide, which suggests the cloud might be the result of two colliding clouds. (full image) Credit: Caltech/Kauffmann, Pillai, Zhang
Tags:
astronomy & physics

PASADENA, Calif.—It's the mystery of the curiously dense cloud. And astronomers at the California Institute of Technology (Caltech) are on the case.

Near the crowded galactic center, where billowing clouds of gas and dust cloak a supermassive black hole three million times as massive as the sun—a black hole whose gravity is strong enough to grip stars that are whipping around it at thousands of kilometers per second—one particular cloud has baffled astronomers. Indeed, the cloud, dubbed G0.253+0.016, defies the rules of star formation.

In infrared images of the galactic center, the cloud—which is 30 light-years long—appears as a bean-shaped silhouette against a bright backdrop of dust and gas glowing in infrared light. The cloud's darkness means it is dense enough to block light.

According to conventional wisdom, clouds of gas that are this dense should clump up to create pockets of even denser material that collapse due to their own gravity and eventually form stars. One such gaseous region famed for its prodigious star formation is the Orion Nebula. And yet, although the galactic-center cloud is 25 times denser than Orion, only a few stars are being born there—and even then, they are small. In fact, the Caltech astronomers say, its star-formation rate is 45 times lower than what astronomers might expect from such a dense cloud.

"It's a very dense cloud and it doesn't form any massive stars—which is very weird," says Jens Kauffmann, a senior postdoctoral scholar at Caltech.

In a series of new observations, Kauffmann, along with Caltech postdoctoral scholar Thushara Pillai and Qizhou Zhang of the Harvard-Smithsonian Center for Astrophysics, have discovered why: not only does it lack the necessary clumps of denser gas, but the cloud itself is swirling so fast that it can't settle down to collapse into stars.

The results, which show that star formation may be more complex than previously thought and that the presence of dense gas does not automatically imply a region where such formation occurs, may help astronomers better understand the process.

The team presented their findings—which have been recently accepted for publication in the Astrophysical Journal Letters—at the 221st meeting of the American Astronomical Society in Long Beach, California.

To determine whether the cloud contained clumps of denser gas, called dense cores, the team used the Submillimeter Array (SMA), a collection of eight radio telescopes on top of Mauna Kea in Hawaii. In one possible scenario, the cloud does contain these dense cores, which are roughly 10 times denser than the rest of the cloud, but strong magnetic fields or turbulence in the cloud disturbs them, thus preventing them from turning into full-fledged stars.

However, by observing the dust mixed into the cloud's gas and measuring N2H+—an ion that can only exist in regions of high density and is therefore a marker of very dense gas—the astronomers found hardly any dense cores. "That was very surprising," Pillai says. "We expected to see a lot more dense gas."

Next, the astronomers wanted to see if the cloud is being held together by its own gravity—or if it is swirling so fast that it is on the verge of flying apart. If it is churning too fast, it can't form stars. Using the Combined Array for Research in Millimeter-wave Astronomy (CARMA)—a collection of 23 radio telescopes in eastern California run by a consortium of institutions, of which Caltech is a member—the astronomers measured the velocities of the gas in the cloud and found that it is up to 10 times faster than is normally seen in similar clouds. This particular cloud, the astronomers found, was barely held together by its own gravity. In fact, it may soon fly apart.

The CARMA data revealed yet another surprise: the cloud is full of silicon monoxide (SiO), which is only present in clouds where streaming gas collides with and smashes apart dust grains, releasing the molecule. Typically, clouds only contain a smattering of the compound. It is usually observed when gas flowing out from young stars plows back into the cloud from which the stars were born. But the extensive amount of SiO in the galactic-center cloud suggests that it may consist of two colliding clouds, whose impact sends shockwaves throughout the galactic-center cloud. "To see such shocks on such large scales is very surprising," Pillai says.

G0.253+0.016 may eventually be able to make stars, but to do so, the researchers say, it will need to settle down so that it can build dense cores, a process that could take several hundred thousand years. But during that time, the cloud will have traveled a great distance around the galactic center, and it may crash into other clouds or be yanked apart by the gravitational pull of the galactic center. In such a disruptive environment, the cloud may never give birth to stars.

The findings also further muddle another mystery of the galactic center: the presence of young star clusters. The Arches Cluster, for example, contains about 150 bright, massive, young stars, which only live for a few million years. Because that is too short an amount of time for the stars to have formed elsewhere and migrated to the galactic center, they must have formed at their current location. Astronomers thought this occurred in dense clouds like G0.253+0.016. If not there, then where do the clusters come from?

The astronomers' next step is to study similarly dense clouds around the galactic center. The team has just completed a new survey with the SMA and is continuing another with CARMA. This year, they will also use the Atacama Large Millimeter Array (ALMA) in Chile's Atacama Desert—the largest and most advanced millimeter telescope in the world—to continue their research program, which the ALMA proposal committee has rated a top priority for 2013.

The title of the Astrophysical Journal Letters paper is, "The galactic center cloud G0.253+0.016: a massive dense cloud with low star formation potential." This research was supported by the National Science Foundation.