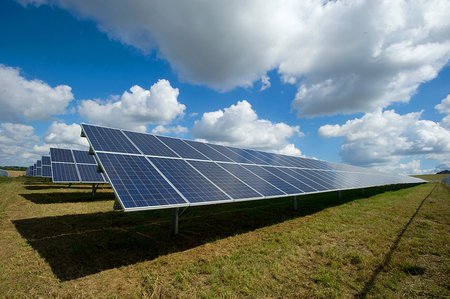 For the past 10 years, a family of materials called metal-halide perovskites, which can efficiently convert sunlight to electricity, has been shaking up solar cell research. Unlike traditional silicon solar cells, perovskites do not need to be manufactured under high temperature and with high purity, making them comparatively cheaper and easier to work with. More importantly, the efficiency of perovskite solar cells—a measure of how much solar energy they convert to electricity—has increased nearly six-fold since 2009, to more than 20 percent. That jump in efficiency is unmatched by any other solar cell material.

A commonly accepted but unproven belief in physics and engineering communities has been that the success of metal-halide perovskites was due to a phenomenon called the "Rashba effect," which influences the motion of electrons through a material. When sunlight strikes a photovoltaic material in a solar cell, it excites electrons flowing through the material, ultimately generating electricity. A pronounced Rashba effect can lead to a long lifetime for excited electrons—that is, it can allow them to flow farther across the material, making it easier to generate electricity and improving the material's overall efficiency.

To explore whether the Rashba effect is actually at play in perovskites, Bernardi teamed up with Caltech physics professor David Hsieh, who studies how electrons flow through solid materials and had recently developed a technique to directly determine whether the Rashba effect is at play in various materials. The technique involves shining an ultrashort pulse of laser light of a specific frequency at the material, and then studying the component of the light that is generated at twice the incoming frequency, a phenomenon known as optical second harmonic generation (SHG). Optical SHG is strongly tied to the Rashba effect because they are both only allowed from certain types of low symmetry crystal structures.

"It was challenging in this case because we were searching for extremely weak SHG signals from the perovskite samples and great care had to be taken to ensure that the samples were not rapidly damaged by the intense laser pulses," says Tejas Deshpande, a lead author on the paper and an applied physics graduate student in Hsieh's lab.

Bernardi's calculations and Hsieh's experiments focused on the crystalline structure and electronic states of lead-halide perovskites. At the atomic scale, metal-halide perovskite crystals at high temperature are shaped like cubes, each with six iodine atoms enclosing a metal atom at its center—in lead-halide perovskites, it is lead—trapped in the center. At room temperature, the cubes elongate into a parallelepiped, or tetragonal, pattern. Previous calculations assumed that both the cubic and tetragonal atomic arrangements become distorted in their lowest energy state, thus leading to a strong Rashba effect. While this would explain why perovskite cells are so efficient, evidence for the Rashba effect appeared scant when the team started investigating this problem.

The researchers, however, found that the hypothesized distortion does not occur in theory or in practice, and that the correct structure is in fact highly symmetric, muting any potential Rashba effect. This result shows that the reason for the high efficiency of lead-halide solar cells appears to fall within standard semiconductor physics, and researchers can now rule out the Rashba effect as a more exotic explanation for the origin of the high efficiency.

The findings were published on May 8 in Nature Communications. The lead author, Kyle Frohna, was an undergraduate student at Trinity College in Dublin at the time the research was being conducted and worked on the project during a Summer Undergraduate Research Fellowship (SURF) at Caltech. He says that the experience was a formative one on his journey to becoming a scientist.

"I learned so much from doing the research and all of the drafts, discussions, and meticulous checking of our findings," Frohna says. "The experience has made me a much more competent scientist as a result."

As he launches into his doctoral studies, Frohna intends to further investigate why perovskites make such efficient solar cells, and what could be inhibiting additional improvements in the technology. "I hope to use fundamental physical insights to enable the rational design of high- efficiency, low-cost perovskite solar cells and related devices," he says.

The paper is titled "Inversion symmetry and bulk Rashba effect in methylammonium lead iodide perovskite single crystals." Other authors include former Caltech postdoctoral researcher John Harter, currently an assistant professor at UC Santa Barbara; as well as Wei Peng and Osman M. Bakr from the King Abdullah University of Science and Technology (KAUST); and Bradford A. Barker, Jeffrey B. Neaton, and Steven G. Louie from UC Berkeley and Lawrence Berkeley National Laboratory. This research was supported by the Space Solar Power Program at Caltech, the Department of Energy, the National Science Foundation, the Gordon and Betty Moore Foundation, and KAUST.