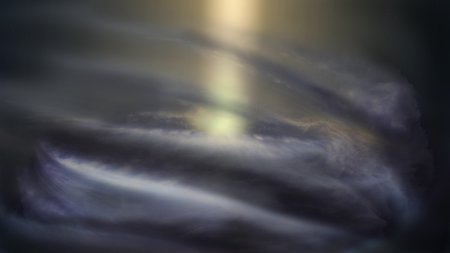 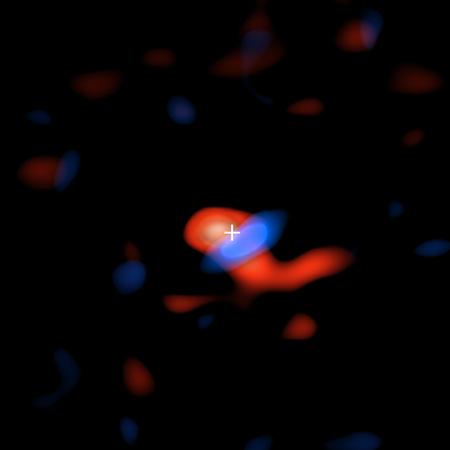 ALMA image of the disk of cool hydrogen gas flowing around the supermassive black hole at the center of our galaxy. The colors represent the motion of the gas relative to Earth: the red portion is moving away, so the radio waves detected by ALMA are slightly stretched, or shifted, to the "redder" portion of the spectrum; the blue color represents gas moving toward Earth, so the radio waves are slightly scrunched, or shifted, to the "bluer" portion of the spectrum. Crosshairs indicate location of black hole. Credit: ALMA (ESO/NAOJ/NRAO), E.M. Murchikova; NRAO/AUI/NSF, S. Dagnello

Astrophysicists have discovered what appears to be a disk of cool gas wrapped around the supermassive black hole at the center of our galaxy. The findings, made with the Atacama Large Millimeter/submillimeter Array (ALMA), will give new insight into the workings of accretion, a process by which black holes siphon surrounding materials onto their surfaces.

"We were the first to image this elusive disk and study its rotation," says Lena Murchikova (PhD '18), an astrophysicist at the Institute for Advanced Study in Princeton, New Jersey, and lead author of a new paper reporting these findings in the June 6 issue of Nature. "We are also probing accretion onto the black hole. This is important because this is our closest supermassive black hole. Even so, we still have no good understanding of how its accretion works. We hope these new ALMA observations will help the black hole give up some of its secrets."

Murchikova performed a large portion of this research as a part of her Caltech PhD thesis. She was a Dr. David and Barbara Groce Fellow at Caltech, studying under Caltech advisers Sterl Phinney, professor of theoretical astrophysics, and Nick Scoville, Francis L. Moseley Professor of Astronomy, Emeritus.

Through decades of study, astronomers have developed a clearer picture of the chaotic and crowded neighborhood surrounding the supermassive black hole, named Sagittarius A*, at the center of the Milky Way. It is known that this region is brimming with roving stars, interstellar dust clouds, and a large reservoir of both phenomenally hot and comparatively colder gases. Theorists have argued for 48 years that there must be a vast accretion disk hiding within this reservoir that extends a few tenths of a light-year from the black hole's event horizon, or the region around a black hole where light can no longer escape.

Until now, however, astronomers have only been able to image a tenuous, hot portion of this gas, which forms a roughly spherical cloud around the black hole and shows no obvious signs of rotation. The hot gas, detected with X-ray telescopes, is estimated to be a blistering 10 million degrees Celsius (18 million degrees Fahrenheit).

The contribution of cooler gas to the accretion flow onto the back hole was previously unknown. ALMA, however, was able to image atomic emission from the area around the supermassive black hole at smaller scales than had been observed before, revealing cool, rotating gas at about 10 thousand Kelvins, or 18,000 degrees Fahrenheit. The observed faint radio signals helped the researchers produce the first-ever image of this cooler gas disk, which has a radius of about 1,000 times the distance between Earth and the sun.

"You can think of the hot gas as being shaped like a bowling ball, with the cool disk being like a thick wedding ring inside, lying at the middle," says Murchikova.

"We are looking forward to future observations, which may confirm the results and reveal a predicted time-dependence of the disk's emission due to the motion of hot stars around the black hole," adds Phinney.

The Nature study, titled, "A Cool Accretion Disk around the Galactic Centre Black Hole," was supported by the National Radio Astronomy Observatory's (NRAO's) ALMA Student Observational Research Program, Dr. David and Barbara Groce, NASA via the Einstein Postdoctoral Fellowship, and the Bezos Fellowship at the Institute for Advanced Study. In addition to Murchikova and Phinney, other co-authors include Anna Pancoast of Harvard University and Roger Blandford of Stanford University. Scoville, though not a co-author, was instrumental in helping with the observational proposals and data analysis.

ALMA is a partnership of the European Organization for Astronomical Research in the Southern Hemisphere (ESO), the National Science Foundation (NSF), and the National Institutes of Natural Sciences (NINS) of Japan in cooperation with the Republic of Chile.

Read the full story from NRAO at https://public.nrao.edu/news/2019-alma-ring/.