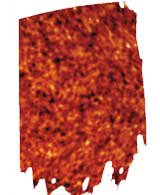 BOOMERANG image of the early universe.

PASADENA—Caltech cosmologists and other scientists involved in an international collaboration have released the first detailed images of the universe in its infancy. The images reveal the structure that existed in the universe when it was 50,000 times younger and 1,000 times smaller and hotter than it is today.

Detailed analysis of the images is already shedding light on some of cosmology's outstanding mysteries, including the nature of the dark matter and energy that dominate intergalactic space, and whether space is "curved" or "flat." The team's results are being published in the April 27 issue of the scientific journal Nature.

Cosmologists believe that the universe was created approximately 12–15 billion years ago in an enormous explosion called the Big Bang. The intense heat that filled the embryonic universe is still detectable today as a faint glow of microwave radiation that is visible in all directions. This radiation is known as the cosmic microwave background (CMB).

Since the CMB was first discovered by a ground-based radio telescope in 1965, scientists have eagerly sought to obtain high-resolution images of this radiation. NASA's COBE (Cosmic Background Explorer) satellite discovered the first evidence for structures, or spatial variations, in the CMB in 1991.

The new experiment, dubbed BOOMERANG (Balloon Observations of Millimetric Extragalactic Radiation and Geophysics), obtained the images using a telescope suspended from a balloon that circumnavigated the Antarctic in late 1998.

The balloon carried the telescope at an altitude of almost 37 kilometers (120,000 feet) for 10 1/2 days. As it flew, an extremely sensitive detector system developed at Caltech recorded the faint signals from the early universe.

The BOOMERANG images are the first to bring the CMB into sharp focus. The images reveal hundreds of complex regions that are visible as tiny variations—typically only one ten-thousandth of a degree (0.0001 C)— in the temperature of the CMB. The complex patterns visible in the images confirm predictions of the patterns that would result from sound waves racing through the early universe, creating the structures that by now have evolved into giant clusters and super-clusters of galaxies.

"The enormous structures that they reveal predate the first star or galaxy in the universe."

Lange and Italian team leader Paolo deBernardis of the University of Rome, La Sapienza, together led the international team that developed the sophisticated experiment. The entire payload was integrated at Caltech for months of extensive testing before it was taken to Antarctica.

Already, analysis of the size of the structures has produced the most precise measurements to date of the geometry of space-time, which strongly indicate that the geometry of the universe is flat, not curved.

"It is really exciting to obtain such strong evidence for a flat universe. This result is in agreement with a fundamental prediction of the 'inflationary' theory of the universe," said Caltech Postdoctoral Scholar Eric Hivon.

The theory hypothesizes that the entire universe grew from a tiny sub-atomic region during a period of violent expansion that occurred a split second after the Big Bang. The enormous expansion stretched the geometry of space till it was precisely flat.

"These measurements represent a watershed event in cosmology" commented Mark Kamionkowski, professor of theoretical astrophysics at Caltech. "The results suggest that we are on the right track with inflation—a hitherto speculative theory for the origin of the universe—and thus open up a path toward scientifically addressing what happened in the very first micro-micro-second after the Big Bang."

"The key to BOOMERANG's ability to obtain these powerful new images," explained Lange, "is the marriage of a powerful new detector technology developed at Caltech and the Jet Propulsion Lab with the superb microwave telescope and cryogenic systems developed in Italy."

The telescope optics focus the radiation from the early universe onto button-size "bolometric" detectors cooled to a fraction of a degree above absolute zero. Extremely sensitive thermometers embedded in each detector record tiny changes in temperature as the telescope scans across the sky.

"These detectors can 'see' tiny differences in the temperature of the early universe in much the same way as the back of your hand responds to the heat from the sun," explained Caltech graduate student Brendan Crill.

"What really sets this detector system apart," continued Viktor Hristov, a senior electronics engineer at Caltech, "is the stability of the detectors and the electronics used to record the faint signals."

Caltech and JPL are responsible for fabricating a similar detector system for the Planck Surveyor, a satellite that will someday image the CMB over the entire sky from a vantage point 1 million miles from Earth.

In a complementary effort, another Caltech team led by Professor Anthony Readhead is now obtaining images of the CMB at even sharper resolution, using a specially built radio telescope, the Cosmic Background Imager (CBI), from a remote site in the Chilean Andes. BOOMERANG and CBI herald a new era of precision cosmological measurement that promises to provide new insights into fundamental physics.