Detection of Water Vapor in the Atmosphere of a Hot Jupiter 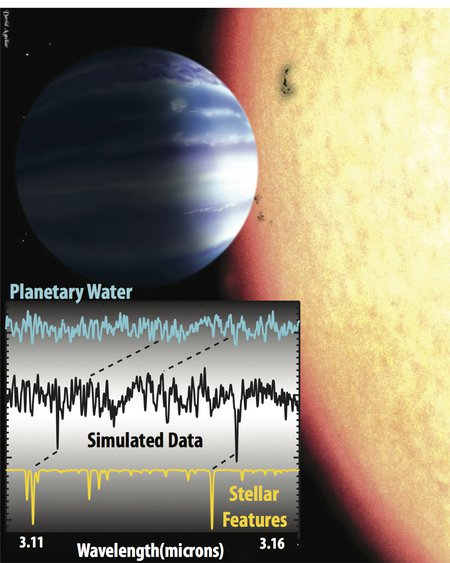 Simulated data showing the method used for detecting water vapor features detected around the hot Jupiter tau Bootis b. In this example, the planetary signal has been increased in strength by several orders of magnitude relative to the actual signal. The dotted lines show the blue- and red-shifts of the planetary and stellar lines in the data, respectively. Credit: Alexandra Lockwood/Caltech
Tags:
astronomy & physics, earth & planetary science

Although liquid water covers a majority of Earth's surface, scientists are still searching for planets outside of our solar system that contain water. Researchers at Caltech and several other institutions have used a new technique to analyze the gaseous atmospheres of such extrasolar planets and have made the first detection of water in the atmosphere of the Jupiter-mass planet orbiting the nearby star tau Boötis. With further development and more sensitive instruments, this technique could help researchers learn about how many planets with water—like Earth—exist within our galaxy.

The new results are described in the February 24 online version of The Astrophysical Journal Letters.

Scientists have previously detected water vapor on a handful of other planets, but these detections could only take place under very specific circumstances, says graduate student Alexandra Lockwood, the first author of the study. "When a planet transits—or passes in orbit in front of—its host star, we can use information from this event to detect water vapor and other atmospheric compounds," she says. "Alternatively, if the planet is sufficiently far away from its host star, we can also learn about a planet's atmosphere by imaging it."

However, significant portions of the population of extrasolar planets do not fit either of these criteria, and there was not really a way to find information about the atmospheres of these planets. Looking to resolve this problem, Lockwood and her adviser Geoffrey Blake, professor of cosmochemistry and planetary sciences and professor of chemistry, applied a novel technique for finding water in a planetary atmosphere. Other researchers had used similar approaches previously to detect carbon monoxide in tau Boötis b.

The method utilized the radial velocity (RV) technique—a technique commonly used in the visible region of the spectrum to which our eyes are sensitive—for discovering non-transiting exoplanets. Using the Doppler effect, RV detection traditionally determines the motion of a star due to the gravitational pull of a companion planet; the star moves opposite that of the orbital motion of the planet, and the stellar features shift in wavelength. A large planet or a planet closer to its host star provides a larger shift.

Lockwood, Blake, and their colleagues expanded the RV technique into the infrared to determine the orbit of tau Boötis b around its star, and added further analysis of the light shifts via spectroscopy—an analysis of the light's spectrum. Since every compound emits a different wavelength of light, this unique light signature allows the researchers to analyze molecules that make up the planet's atmosphere. Using data of tau Boötis b from the Near Infrared Echelle Spectrograph (NIRSPEC) at the W. M. Keck Observatory in Hawaii, the researchers were able to compare the molecular signature of water to the light spectrum emitted by the planet, confirming that the atmosphere did indeed include water vapor.

"The information we get from the spectrograph is like listening to an orchestra performance; you hear all of the music together, but if you listen carefully, you can pick out a trumpet or a violin or a cello, and you know that those instruments are present," she says. "With the telescope, you see all of the light together, but the spectrograph allows you to pick out different pieces; like this wavelength of light means that there is sodium, or this one means that there's water."

In addition to using the spectrographic technique to study the planet's atmospheric composition, the method also provides a way for researchers to analyze the mass of planets. "They're actually two separate findings, but they're both very exciting," says Lockwood. "When you're doing calculations to look for the atmospheric signature—which tells you that there's water present—you also determine the 3-D motion of the star and the planet in the system. With this information, if you also know the mass of the star, you can determine the mass of the planet," she says.

Previous RV methods for measuring a planet's mass could only determine the planet's indicative mass—an estimation of its minimum mass, which might be much less than its actual mass. This new technique provides a way to measure the true mass of a planet since both light from the star and the planet are detected, which is critical for understanding how planets and planetary systems form and evolve.

Although the technique promises to augment how planetary scientists analyze the properties of extrasolar planets, it has limitations, the researchers say. For example, the technique is presently limited to so-called "hot Jupiter" gas giant planets like tau Boötis b—those that are large and orbit very close to their host star.

"The technique is limited by the light-collecting power and wavelength range of the telescope, and even with the incredible collecting area of the Keck Observatory mirror on the high, dry summit of Mauna Kea we can basically only analyze hot planets that are orbiting bright stars, but that could be expanded in the future as telescopes and infrared spectrographs improve," Lockwood says. In the future, in addition to analyzing cooler planets and dimmer stars, the researchers plan to continue looking for and analyzing the abundance of other molecules that might be present in the atmosphere of tau Boötis b.

"While the current state of the technique cannot detect earthlike planets around stars like the Sun, with Keck it should soon be possible to study the atmospheres of the so-called 'super-Earth' planets being discovered around nearby low-mass stars, many of which do not transit," Blake says. "Future telescopes such as the James Webb Space Telescope and the Thirty Meter Telescope (TMT) will enable us to examine much cooler planets that are more distant from their host stars and where liquid water is more likely to exist."

The findings appear in the The Astrophysical Journal Letters in a paper titled "Near-IR Direct Detection of Water Vapor in tau Boötis b." Other coauthors include collaborators from Pennsylvania State University, the Naval Research Laboratory, the University of Arizona, and the Harvard-Smithsonian Center for Astrophysics. The work was funded by the National Science Foundation Graduate Research Fellowship Program, the David and Lucile Packard and Alfred P. Sloan foundations, and the Penn State Center for Exoplanets and Habitable Worlds.