The First 50 Years of Planetary Science 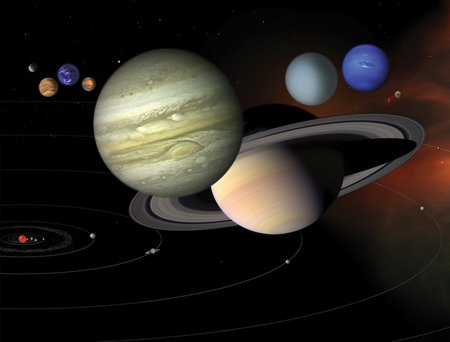 If you ask Andy Ingersoll how Caltech has contributed to our understanding of the universe, he will tell you, "Caltech invented planetary science!" Indeed, the existence of planetary science as a scientific discipline springs largely from the vision of the late Robert P. Sharp (BS'34, MS'35), chair of Caltech's Division of Geological Sciences from 1952 to 1968, who sought a new frontier for geology. And since the field's origins just fifty years ago, Caltech has become one of the top centers of planetary science research in the world.

In the early 1960s, several Caltech faculty members were advocating deep-ocean studies of the sea floor, which would have meant acquiring a deep-ocean research vessel—or partnering with an institution that owned one. Instead, as Sharp explained in a video on the program's history, "We chose to go into space science because the bus, in a sense, was right at our back door." Indeed, NASA's Jet Propulsion Laboratory, which Caltech had founded as a rocket research facility during World War II, had claimed unmanned spaceflight as its turf by putting America's first successful satellite, Explorer 1, into orbit a mere five years earlier. "We had a greater chance for uniqueness by allying with the space program," he continued. Sharp; Bruce Murray, Caltech's first planetary science professor; and Caltech physicist Robert Leighton were key members of the science team for JPL's Mariner 4, the first spacecraft to reach Mars. The 5.2 million bits of data it returned—including 21 pictures of the Martian surface—allowed us to begin comparing Earth and its brethren firsthand. Today, planetary science has grown to encompass the study of solar systems beyond our own.

At a symposium held on Thursday, February 6, to celebrate planetary science at Caltech, a panel of speakers exemplified this expansion while illustrating the Institute's continued diversity of approaches to the field. Planetary scientists John Grotzinger and Bethany Ehlmann gave the latest updates from the rover-based exploration of Mars. Planetary scientist David Stevenson talked about the gas giants of the outer solar system, all of which have been visited by at least one JPL spacecraft. Planetary astronomer Mike Brown, who got Pluto demoted to a minor planet, spoke of the hordes of objects at the outer limits of the solar system that he expects to discover in April using a Japanese telescope on the summit of Hawaii's Mauna Kea. Physics professor Ed Stone, the project scientist for JPL's Voyager mission, described the journey of the twin spacecraft into interstellar space; while astronomer Gregg Hallinan and planetary scientist Heather Knutson outlined different approaches to finding habitable worlds circling nearby suns.

Says Stevenson, "Bob Sharp was always interested in doing something different, something new. We're now roaming Mars, finding new worlds in the outer solar system and starting to understand planets around other stars. He would be delighted with how it turned out."