Gamma-ray Burst Found To Be Most Energetic Event in Universe 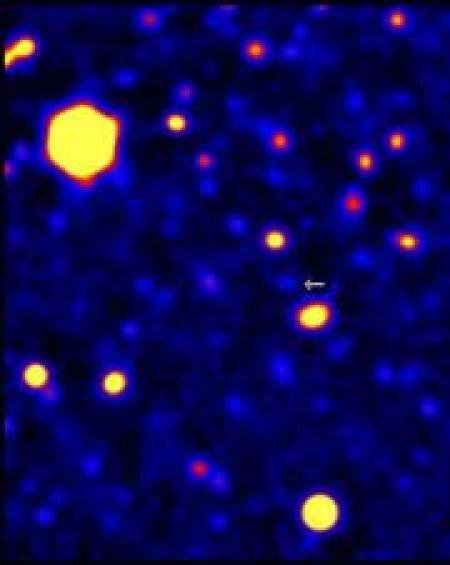 The image shows the same field as seen about two months later, after the burst afterglow has faded away, revealing a faint galaxy at its position (also marked with an arrow).
Tags:
astronomy & physics

PASADENA—A team of astronomers from the California Institute of Technology announced today that a recently detected cosmic gamma-ray burst was as bright as the rest of the universe, releasing a hundred times more energy than previously theorized.

The team has measured the distance to a faint galaxy from which the burst, designated GRB 971214, originated. It is about 12 billion light-years from Earth (one light-year is approximately 5.9 trillion miles.) Combined with the observed brightness of the burst, this large distance implies an enormous energy release. The team's findings appear in the May 7 issue of the scientific journal Nature.

"The energy released by this burst in its first few seconds staggers the imagination," said Caltech professor Shrinivas Kulkarni, one of the two principal investigators on the team. The burst appears to have released several hundred times more energy than an exploding star, called a supernova, until now the most energetic known phenomenon in the universe.

"For about one or two seconds, this burst was as luminous as all the rest of the entire universe," said Caltech professor George Djorgovski, the other principal investigator on the team.

Finding such a large energy release over such a brief period of time is unprecedented in astronomy, except for the Big Bang itself.

"In a region about a hundred miles across, the burst created conditions like those in the early universe, about one millisecond [1/1,000 of a second] direction in the sky: unlike visible light, gamma-rays are exceedingly difficult to observe with a telescope, and the bursts' short duration exacerbates the problem. The Italian/Dutch satellite BeppoSAX, launched in 1996, had the ability to localize the bursts on the celestial sphere with a sufficient precision to permit follow-up observations with the world's most powerful ground-based telescopes.

This breakthrough led to the discovery of long-lived "afterglows" of bursts in X-rays, visible and infrared light, and radio waves. While gamma-ray bursts last only a few seconds, their afterglows can be studied for several months. This, in turn, led to the discovery that the bursts do not originate within our own galaxy, the Milky Way, but rather are associated with high-redshift, extremely distant galaxies in the universe.

The gamma-ray burst was detected on December 14, 1997, by the BeppoSAX and CGRO satellites. BeppoSAX and NASA's Rossi X-ray Timing Explorer spacecraft detected an X-ray afterglow. BeppoSAX precision led to the detection of a visible light afterglow, found by a team from Columbia University and Dartmouth College, including Professors Jules Halpern, David Helfand, John Torstensen, and their collaborators, using a 2.4-meter telescope at Kitt Peak, Az., but no distance could be measured from these observations.

As the visible light from the burst afterglow faded, the Caltech team detected an extremely faint galaxy at its location, using one of the world's largest telescopes, Caltech's W. M. Keck Observatory's 10-meter Keck II telescope, on Mauna Kea, Hawaii. The galaxy is about as faint as an ordinary 100-watt light bulb would be as seen from a distance of a million miles.

Subsequent images taken with the Hubble Space Telescope confirmed the association of the burst afterglow with this faint galaxy.

The Caltech team succeeded in measuring the distance to this galaxy, using the light-gathering power of the Keck II telescope. The galaxy is at a redshift of z=3.4, or about 12 billion light-years distant (assuming the universe to be about 14 billion years old).

From the distance and the observed brightness of the burst, astronomers derived the amount of energy released in the flash. Although the burst only lasted a few seconds, the energy released was hundreds of times larger than the energy given out in supernova explosions, and it is about equal to the amount of energy radiated by our entire galaxy over a period of a couple of centuries.

This is only the energy seen in the gamma rays. It is possible that other forms of radiation, such as neutrinos or gravity waves, which are extremely difficult to detect, carried a hundred times more energy than that.

While the origin of the bursts remains a mystery, what happens to the burst's glowing remnant appears to be reasonably well understood, within the so-called cosmic-fireball model. The observations of the burst afterglow by the Caltech team helped determine in some detail its physical parameters.

"It is gratifying to see that we do have some theoretical understanding of this remarkable phenomenon," said Kulkarni.

In addition to Professors Kulkarni and Djorgovski, the team includes Dr. Dale Frail from the National Radio Astronomy Observatory in Socorro, New Mexico; Drs. A. N. Ramaprakash, Tom Kundic, Stephen Odewahn, and Lori Lubin from Caltech; Dr. Mark Dickinson from the Johns Hopkins University, in Baltimore, Maryland; Dr. Robert Goodrich from the W. M. Keck Observatory in Hawaii; graduate students Joshua Bloom and Kurt Adelberger from Caltech; and many others.

Full scale images of the GRB 971214 field are available.