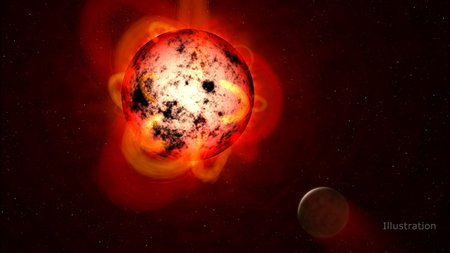 Cool dwarf stars are hot targets for exoplanet hunting right now. The discoveries of planets in the habitable zones of the TRAPPIST-1 and LHS 1140 systems, for example, suggest that Earth-sized worlds might circle billions of red dwarf stars, the most common type of star in our galaxy. But, like our own sun, many of these stars erupt with intense flares. Are red dwarfs really as friendly to life as they appear, or do these flares make the surfaces of any orbiting planets inhospitable?

To address this question, a team of scientists has combed 10 years of ultraviolet observations taken by NASA's Galaxy Evolution Explorer (GALEX), a mission led by Caltech that ended in 2013. The team looked for rapid increases in the brightness of stars due to flares. To detect and accurately measure these flares, the team had to analyze data over very short time intervals.

First author Chase Million of Million Concepts in State College, Pennsylvania, led a project called gPhoton that reprocessed more than 100 terabytes of GALEX data held at the Mikulski Archive for Space Telescopes (MAST), located at the Space Telescope Science Institute. The team then used custom software developed by Million and Clara Brasseur, also at the institute, to search several hundred red dwarf stars, and they detected dozens of flares.

The brown dwarf star flares GALEX detected are similar in strength to flares produced by our own sun. However, because a planet would have to orbit much closer to a cool, red dwarf star to maintain a temperature friendly to life as we know it, such planets would be subjected to more of a flare's energy than Earth.

"These results show the value of a survey mission like GALEX, which was instigated to study the evolution of galaxies across cosmic time and is now having an impact on the study of nearby habitable planets," said Don Neill, research scientist at Caltech in Pasadena, who was part of the GALEX collaboration. "We did not anticipate that GALEX would be used for exoplanets when the mission was designed."